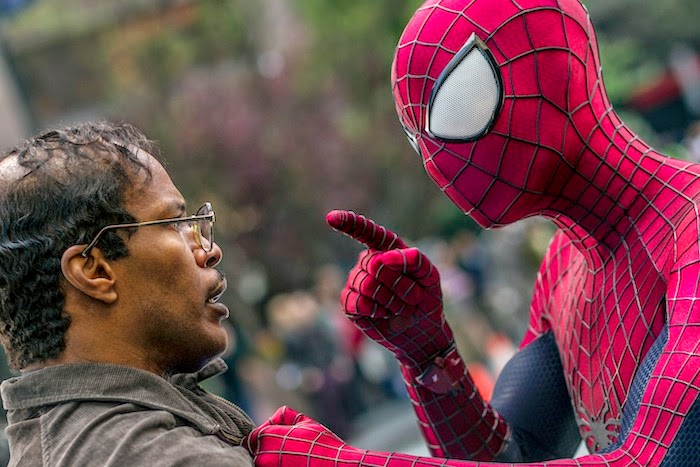 You get the feeling that hiding somewhere in the 140-minute runtime of director Marc Webb’s The Amazing Spider-Man 2 there’s a decent 90-minute movie. The problem is that, for every good moment, fantastic performance, and solid action scene, there are underdeveloped character and story elements, questionable CGI, and tepid melodrama. This causes the movie as a whole to come across as flat, dull eye candy, which never does enough to differentiate itself from either its predecessor or Sam Raimi’s earlier stab at the franchise. Trying to do too much, not enough works, there’s no thematic continuity, and you walk away feeling like the filmmakers never decided what movie they wanted to show you.

Andrew Garfield proves once again that he was an excellent choice to play the new incarnation of the web-slinger and his civilian alter ego Peter Parker. Charming, earnest, and fun to watch, he embodies the duality of the character, capturing both the wisecracking teen, but also carrying the weight of his responsibility and the baggage he stows under all that spandex. People are going to hate the constant banter with the bad guys, but that’s a key part of Spidey’s shtick, and to be honest, that’s always been the most annoying trait of the comics. As the lead he’s easily the best part of the movie, but still not enough to save the day.

Playing opposite Garfield, Emma Stone is back as Gwen Stacey. She, like her partner in crime, is great to watch and it’s hard to love her at least a little bit. It’s nice to see a female character that is more than just a superhero’s girlfriend, a complication, or some dangling carrot for him to save. Over the course of the movie she does wind up in peril, but this comes as a direct result of the choices she makes of her own accord. In fact, she has a skill set and knowledge that, without, there’s no way good could possibly triumph over evil.

Aside from his origins and the death of uncle Ben, the relationship between Peter and Gwen is one of most iconic pieces of Spider-Man lore. Though there are a few too many will-they-won’t-they moments that take up valuable time, it’s nice to see that relationship rendered well, and Garfield and Stone have such a fantastic chemistry that it’s hard not to be engaged in their story. This is easily the high point, too bad the rest of the movie is nothing but mediocre.

Almost everything not directly involved with Peter and Gwen is clutter. Spidey has always been defined in large part by his relationship with his aunt and uncle and the void left by the absence of his parents, but, like with the first film, the attempts to include his family are forced and hokey. You get the impulse to make everything connect, but when every last thread in this kid’s entire life ties up into a neat little bow, it’s too easy and false. And in this iteration, they’ve made Gwen’s father, Captain Stacey (Dennis Leary), an unnecessary and awkward stand-in for Uncle Ben.

When Peter reconnects with his old friend Harry Osborne (Dane DeHaan), it actually starts off quite promising. The first two scenes they have together are both good, the two play off each other well, and you’re ready for this to become a nice addition to the franchise. Yeah, that goes south as the movie progresses, and the villains leave much to be desired.

The Amazing Spider-Man 2 is really the process of Harry becoming the Green Goblin—and setting up the Sinister Six for future movies in the process. While that will mainly pay dividends in the future—here Harry becomes an overwrought, cartoon-simple caricature, and Goblin proper gets relatively little screen time—the primary villain here is Electro (Jamie Foxx). Beginning life as the mild-mannered Oscorp employee Max Dillon, his motivation is cliché and overly simplified. You know what they’re going for, he’s a nobody, a faceless cog in the machine who is continually stepped over and marginalized, and he just wants to be seen, to be visible. But that’s as much development as you get. After he’s electrocuted and bitten by some electric eels—note to self, that’s an easy way to get superpowers—he instantaneously flips from “I love Spider-Man, he’s my best friend,” to “Must kill Spider-Man.” Dull and boring, Electro is primarily there to dazzle you with lightning bolt special effects that are reminiscent of the Emperor in Return of the Jedi. And just in case you were really excited to see either the Rhino or Paul Giamatti, don’t get your hopes up, though he’s there at the very start of the movie, he’s little more than a cameo, again, to set up a Sinister Six movie in the future. Unfortunately, from what you see here, you may not want to see that movie.

After The Amazing Spider-Man, one criticism leveled at Webb was that his action chops weren’t up to the task. Before that movie his highest profile job was at the helm of the cutesy indie romance (500) Days of Summer, so he didn’t have much of a background in that realm. Every action piece in Spidey 2 feels like him screaming, “See, I can too direct action!” And while some of the scenes swinging through the urban canyons of New York are fun, others are not. There are far too many tricks and gimmicks, and the CGI can be so sharp and clean that the figure of Spider-Man often doesn’t feel like a part of the shot. The camera constantly swoops in and out and around to dizzying effect, and not in a good way. It all creates a jumbled visual incoherence that feels like the director trying to show you what he can do without regard to how these flourishes impact the rest of the film.

The Amazing Spider-Man 2 works best when Peter isn’t wearing the trademark red and blue suit, when he’s just being a kid. The relationship between he and Gwen is a nice, simple pleasure, one that is unfortunately overwhelmed by a glut of under-realized threads. So much of the first movie is taken up rehashing Spidey’s origins, that this is the film where the rebooted franchise needs to really establish itself, but never does. The action between Spider-Man and Electro seems like it’s only there to take up space, while the main concern of the movie is to set up future installments. The movie will certainly make enough money to ensure The Amazing Spider-Man 3, but Sony has some serious work to do if they want to make it worth watching.

Posted by Brent McKnight at 7:36 PM