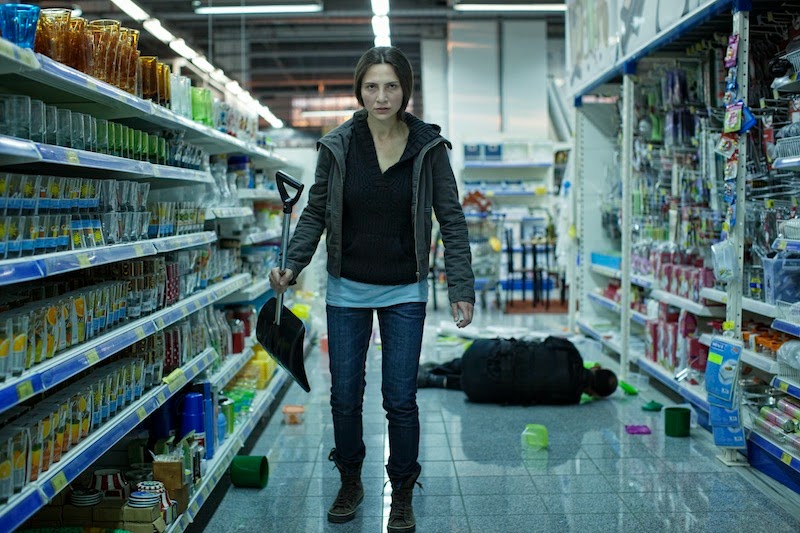 When Greece is portrayed in the movies it’s usually as either a paradise with gorgeous beaches and crystal clear Mediterranean waters for frolicking in, or as a significant place in the history of the human race. Why else would Bill and Ted venture back there just to kidnap one of their key philosophical figures? Giorgos Servetas’ new film, “Standing Aside, Watching,” however, shows a completely different side of the Southern European nation. This is a grim, bleak picture of a country fraught with corruption and violence, from the top all the way down to the smallest social levels.

After a life of trying to become an actress, a failed dream now discarded, Antigone (Marina Symeou) returns to her hometown to regroup and figure out what’s next. The way she feels about her home is the way a lot of us feel about the places we come from: there are very real reasons why we left in the first place and going back isn’t something we’re necessarily stoked about. This is the kind of town where, when she steps off the train, an old transient asks her if she didn’t make a mistake because no one ever gets off here. There is an ominous air over this small town which is full of broken down buildings and swarms of street dogs; even the beach is a decrepit shithole.

While her reluctant return isn’t initially so bad—she finds a job teaching English to kids, rekindles a few old connections, and even starts dating a hot younger man, Nikos (Giorgos Kafetzopoulous)—the surface hides a much larger, more sinister level of dysfunction. This is the kind of place that sucks you in and ruins everyone who isn’t able to make it out, like an undertow that drags you down and holds you there. At first she just sees this happening, but before long the hints of violence and intolerance show through, sticking their fingers into Antigone’s life, infecting every aspect from her friendships and relationships to her work life. The title is especially apt because that’s all anyone does, bearing witness to the depravity instead of doing anything about it.

“Standing Aside, Watching” is all about skewed power dynamics. Small time fascists rule over every element of the town, imposing their will on everyone around them, through threat of violence, and physically on the few occasions when anyone actually stands up to them. Antigone, contrary and strong by her very nature, pushes back and stands up for herself and her friends, until, after one brutish, abusive encounter with townspeople after another, she reaches the point where something has to break.

The look of the film matches the mood and setting in both tone and appearance. This isn’t black and white, but there is an overarching blue and grey color scheme that is all but monochromatic and adds a layer of bleakness and desperation to the story and surroundings. Though this is a gradual build, there is an urgency to the narrative and you know that what is going on in Antigone’s life is playing itself out on a much larger scale across the country, as well as dredging their national past and mythology.

“Standing Aside, Watching” is a moody, simmering thriller with wider aspirations and aims, but also focuses on a very personal, human story and struggle. Antigone is frustrated and bullied and pushed around, thrown about by the forces of greed and corruption from that starts at the lowest rungs but stretches all the way to the top. The film pushes you around in a similar manner, forcing you to experience the righteous indignation and rage that she feels at the injustices all around her. It grabs you and refuses to let you go, raking you across rocks, pummeling you to a finale that is brutal, natural, and, from the very first frame, seemingly inevitable.

Posted by Brent McKnight at 2:17 PM