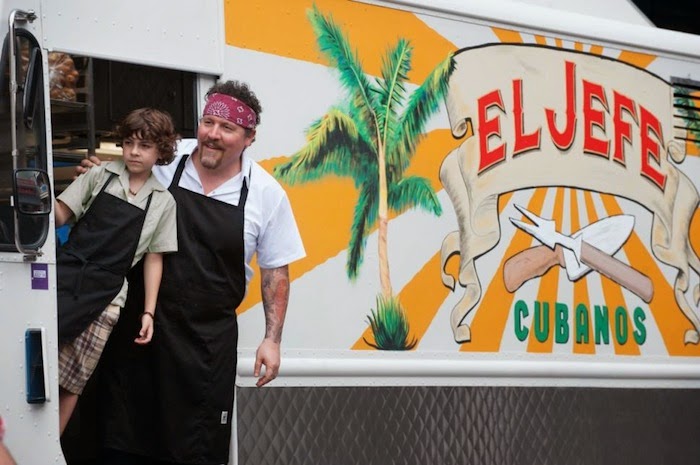 It’s hard to watch “Chef” and not think of the film as a metaphor for writer/director Jon Favreau’s career trajectory. He began his cinematic life working on indie films like 1996’s “Swingers” before hitting it big with massive hits like “Iron Man”, where he reportedly butted heads with the studio over his creative input. “Chef” is definitely a more personal film, a fact that shines through in every last scene. Even though it can be a little light, you can tell exactly how much he and everyone else enjoyed making the film, and that makes it a great deal of fun to watch.

Favreau stars as Carl Casper, a chef at a high-end Los Angeles restaurant. Despite a series of critical successes early in his career—Carl, like Favreau, was a bright shooting star in his chosen field—he’s hit something a of a creative lull, butting heads with his restaurant’s owner, played by Dustin Hoffman as a nice stand-in for a Hollywood executive who just wants him to deliver the same dish over and over again. After a particularly nasty review comes in, Carl has a very public meltdown. As all of this is going on, he tries to connect with his ten-year old son, Percy (Emjay Anthony). At the core, “Chef” is about figuring out what is really important in life. Carl has been doing the same job for so long that, without it, he has no idea what to do or who he is. The story follows him as he reacquaints himself with his passion and discovers what makes him truly happy.

While there’s nothing particularly wrong with “Chef,” there’s not too much going on. This is a fun, good-natured movie, and it is nice to watch something that’s not too heavy. Favreau has an accessible, everyman charm, the supporting cast is full of his celebrity buddies like Amy Sedaris, Bobby Cannavale, and Scarlett Johansson, all having a blast, and you can sit back and enjoy yourself throughout. The music is especially good—a Cuban version of “Sexual Healing” being the highlight—and a slew of cooking montages that border on food porn will certainly make your mouth water. One of these is oddly reminiscent of Kevin Bacon’s angry dancing in “Footloose.” However, there’s little depth or tension or anything else to really hook you and pull you in.

The problem is that there’s never much at stake. Carl isn’t a bad guy, he’s just insecure, needy, and unsure of himself and of what to do next. Sure, he could be a better father, but he could also be a lot worse. He loves his son, sees him regularly, and though they could be closer, they’re not particularly estranged. Hell, Carl and his ex wife Inez (Sophia Vergara) are still close friends. As the film meanders along on a cross-country road trip in Carl’s new venture, a food truck—every subculture eventually gets its very own movie—you start to wonder why you’ve gone on this particular ride.

The overall drama of “Chef” never really goes any deeper than a vague existential crisis, the mild fuss of a man in middle age wondering if he’s made all of the wrong choices in life. You feel like that’s the whole purpose, that Favreau wants to tell a smaller, more personal story, and while it’s nice and breezy on the surface—Carl and his best buddy and sous chef Martin (John Leguizamo) have a particularly fantastic chemistry—you never connect and get emotionally invested like you need to. It’s just too light and fluffy, good fluff to be sure, but still fluff.

As “Chef” progresses and becomes something of a procedural on how to start your very own food truck, the movie starts to rely too heavily on social media tropes that will make the film feel dated in very short order. You get it, kids are way into to Twitter and Vine, it’s a huge part of marketing, and it provides a few moments of nice father son bonding, but it feels like a desperate attempt to feel relevant, one that ultimately bites the film in the ass and will cut its ultimate longevity down to nil.

Where “Chef” succeeds most is as a metaphor for Favreau’s complicated relationship with critics and the studios. His boss hired him because of his originality and inspiration, though stifles those tendencies, telling him to just play the hits. Hits are only hits for a while, until the public gets sick of them. Do the same thing over and over, your work gets stale, and people are going to call you on that. Where a lot of artists—filmmakers, writers, painters, whoever—immediately lash out and attack critics without actually examining their work, as Carl does, it’s more complicated than that, a fact that he finally comes to realize. While the first time you do something it might be fresh and risky, but the fifth, tenth, twentieth time, you run the risk of becoming repetitive and bland. “Chef” is really about a creative personality trying to break free from a system that fosters this repetition and stagnation.

Posted by Brent McKnight at 7:54 PM