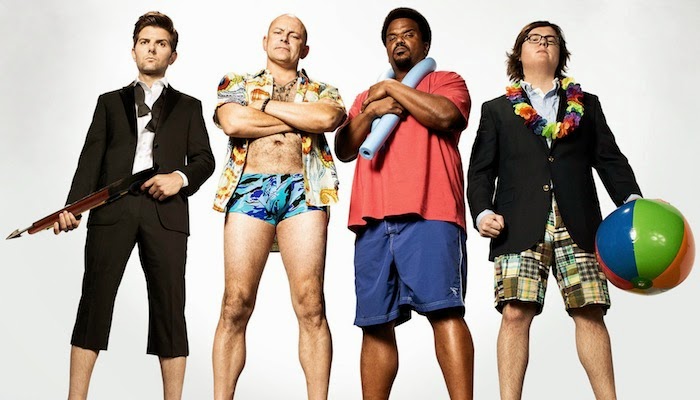 Lets be honest, you probably already know if you want to see Hot Tub Time Machine 2 or not based on the first one, the crude, crass style of humor, and the cast. This is generally the kind of foul-mouthed comedy you either like or you don’t, and it delivers exactly what you expect on that front.

I legitimately enjoy the first movie. It’s hard to claim that it’s great art, but it’s self-aware in a fun way, witty between dick jokes (and I’m certainly not at all opposed to a well-timed dick joke), the story moves along at a good clip, and there’s even a kernel of heart and friendship underneath it all. The second one, however, has none of these redeeming qualities.

The film picks up shortly after the first, and finds the characters almost exactly where they were when we left them. Lou (Rob Corddry) is a rock star/internet mogul, Nick (Craig Robinson) records hit songs before the original artists have the chance to, and Jacob (Clark Duke) basically just sits on the couch and masturbates. And of course, they’re miserable. Lou’s drug use is out of control and he’s a tyrant at work, Nick’s success is hollow since he’s basically a cover band, and Jacob is nothing more than Lou’s live-in butler. Right out of the gate, they make sure to explain away the absence of John Cusack’s Adam. When someone shoots Lou in the dick—this is very much kind of movie where people get shot in the dick with a shotgun and someone pukes on a woman’s breasts—they hop in the trusty time travel device of the title to try and set things right. Instead of going to the past, they wind up ten years in the future, where they encounter Adam’s son, Adam Jr. (Adam Scott), and shenanigans ensue.

Hot Tub Time Machine 2 is less a story than a string of bits someone though were funny lined up in a barely coherent, convoluted plot that tries to be clever only to fail in miserable fashion. Improvised asides go on for way too long and are repetitive to the point of total inanity. Seriously, one bit where characters fumble to find the right word, while explaining their thought process to another character, comes around in at least three different spots. It’s not funny the first time. 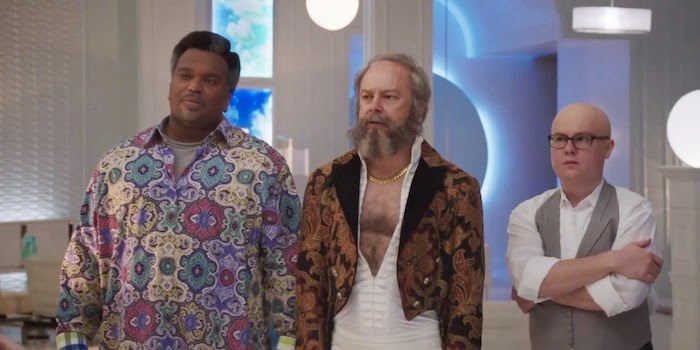 The pace is all over the place. When I checked my watch walking out of the theater, I was legitimately shocked to see that only 90 minutes had passed. In all seriousness, I thought was at least two hours long; it certainly feels that way. It keeps going on and on and on and just won’t end. There are elaborate set ups, one involving Christian Slater as a futuristic game show host, that offer zero in the way of payoff. Unless you’ve always wanted to see one of these guys fuck another one in front of an audience.

There are, admittedly, a few chuckles to be had, but there’s nothing that sticks with you, nothing that is more than a momentary laugh you immediately forget. They’re trying so hard to be edgy and outrageous and shocking, but all you get are the kind of stupid fart jokes you made with your buddies in junior high, but not even that fresh. Where the first film pokes fun at the genre, Hot Tub 2 simply yells out titles of time travel movies at random—Back to the Future, Looper, those have time machines—in some vague attempt to be clever, I think. We all know the plot of Terminator, you don’t have to explain it multiple times.

While that is a problem in itself, Hot Tub Time Machine 2 is sprinkled throughout, almost from the beginning, with misplaced moments where they try to take a knee and get serious. Most of these instances have no business in this movie and only exist so Lou can ruin what is supposed to be an emotional moment by farting or dropping another gay joke. Any time they try to squeeze legitimate feeling out this turd of a script it rings completely empty and false.

The three main characters are all terrible people acting like, you guessed it, terrible people. You don’t particularly root for any of them. Whenever the awkward subplot of a vengeful smart car trying to kill Lou pops up, you actively hope he gets run down just to make it stop. But of course, in the end, they all get their unearned, inauthentic realization moments where it finally dawns on them, “holy shit, I really am an asshole,” and they’re magically supposed to be redeemed.

Sitting down in the theater, I hoped to be moderately entertained. Like I said, I enjoy Hot Tub Time Machine, and Hot Tub Time Machine 2 looked like essentially the same shtick from the same people. How bad could it be? But it’s not even worth your time as an empty, momentary distraction. Stale, repetitive, and overlong, perhaps the most egregious problem of all is that it is bland and totally forgettable. Even for a half-assed sequel, Hot Tub Time Machine 2 is incompetent and desperately flails around, not sure what to do. [Grade: D]

Posted by Brent McKnight at 6:13 PM