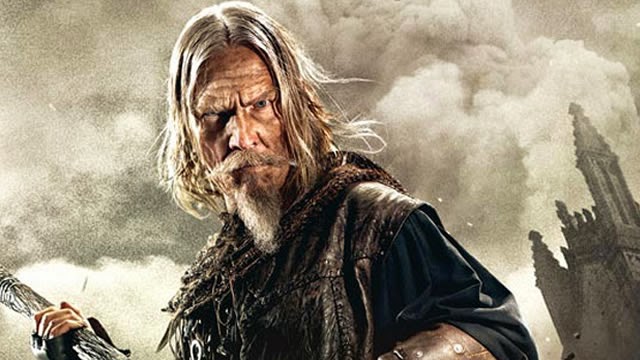 Seventh Son is like watching a DragonForce song come to life. Seriously, there are dragons, witches, mystics, monsters, and riding into battle; this is an adventure metal band’s wet dream. At times this is an absurd amount of fun; at others, not so much at all. The biggest problem is, for a big fantasy movie, there is very little imagination to be found.

With a cast that includes both Jeff Bridges and Julianne Moore, I do, however, have a running theory that this is direct sequel to The Big Lebowski, but from the perspective of the Dude on a bad trip. I could be wrong about that, and I seriously doubt the Coen Brothers signed off in any way, but a guy can dream, right? And it would certainly explain a few things.

I hope you’re familiar with Iron Maiden’s 1988 album “Seventh Son of a Seventh Son,” because if you’re not, the concept isn’t explained in any way at all, so you might be a little lost. In mythology, the seventh son of a man who is himself a seventh son has mystical powers, though these skills vary from source to source. There are Irish myths, American myths, and even a few from South America, and while there is some discrepancy, all of these cultures believe these folks derive powers based on where they’re born in their family. The movie never talks about any of that, it just thrown you in, lets you know that they’re different, for some unspecified reason, and goes on from there.

That’s indicative of the overall approach of the movie. After being delayed two years—it was originally scheduled to hit theaters in February of 2013—it’s like they just threw up their hands and yelled, “Fuck it, this is what we got.” And to be honest, in the end clarity doesn’t really matter one way or the other. 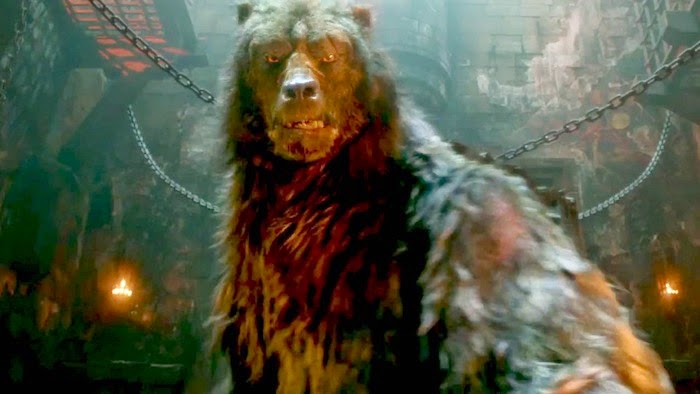 In the world of director Sergey Bodrov’s film, with a script by Eastern Promises’ Steven Knight and Charles Leavitt (Blood Diamond), seventh sons are essentially witch hunting exorcists, though there aren’t many of them left. Master Gregory (Bridges) is essentially an old timey version of Rooster Cogburn from True Grit. He’s a drunk who goes around casting out demons, collecting payment, drinking away his earnings, and losing apprentices. When the evil witch, Mother Malkin (Moore, cackling her way through the entire movie and occasionally turning into a dragon with a head full of red dreadlocks), he enlists a new seventh son, Tom Ward (Ben Barnes). Tom is the Luke Skywalker figure of the film, a young man with visions who yearns for something more than his humdrum country life. And he definitely gets his wish. Here’s the catch, they only have a week to learn Tom—seriously, his name is just Tom—all of the things Gregory took ten years to teach his previous sidekick (Kit Harrington), or the world will end, or something. But it’s cool, Tom’s a quick study.

At its best, Seventh Son is a delirious monster ride full of creatures and magic and Bridges’ weird ass choice of accent. He seriously spends most of the movie muttering about “fucking witches” and belittling Tom. If you’re into ‘80s fantasy movies like Krull, Beast Master, Ladyhawke, and Dragonslayer, you’ll get a kick out of these parts, and the movie is a reasonable amount of manic fun. (People keep throwing around The Hobbit and Lord of the Rings, but this can’t even dream of being in the same stratosphere as those.) The rest, maybe not so entertaining, as Gregory and Tom embark on a bland, predictable journey. They do, however, fight a giant man-bear along the way (haven’t you always wanted to see Jeff Bridges ride an angry bear?), while Gregory throws out pieces of down-home wisdom that are more snark than information.

Along the way, Tom falls in love with a sexy young witch, Alice (Alicia Vikander), who is just as conflicted and unsure about the future and allegiances as he is. They’re destined to be together forever as their hands spark the first time they touch in the moonlight—I’m not kidding—or maybe that was just some leftover witch dust, they’re not sure. I’m still not kidding.

You have to wonder how they put together this cast. There are Academy Award nominees and winners, plus the likes of Vikander, a young actress definitely on the rise, as well as Djimon Hounsou, Olivia Williams, and Kit Harrington. Like I said, this could and should be a lot of fun, but there is too much dead space, too much that falls flat, and for every choice scene of fantasy mayhem, there’s another flat, tepid attempt to be serious that it not the right tone for Seventh Son at all.

You had to hope for some inspired madness, and while there are a few scattered moments, overall, Julianne Moore leading a coven of shape-shifting dragon witches should be a complete and total blast, at least way more fun than this. Instead, Seventh Son is just bland and pedestrian and doesn’t ever capitalize on the sparks that fall from the sky, stamping them out with tedium instead of fanning them into roaring flames of chaos. By time the anticlimactic ending rolls around, it feels like Seventh Son wants to be over even more than you want it to be. It doesn't help matters that the 3D transfer, at least the print I saw, is godawful.[Grade: C-]