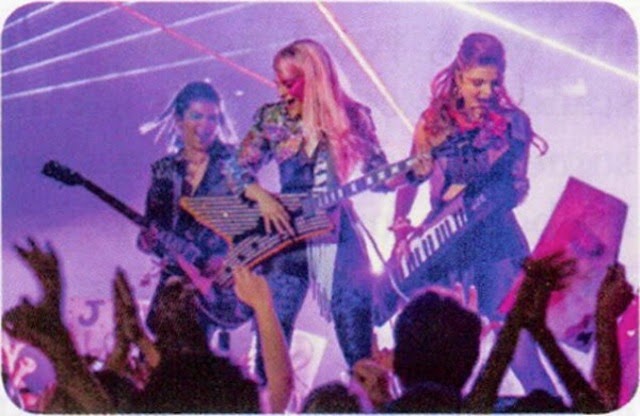 Jem really is truly, truly, truly outrageous. Based on the ‘80s cartoon, it’s been a while since we heard anything about Jem and the Holograms, but this new still hit the airwaves today and it shows off the live-action interpretation of the retro future look of the title character and her band.

Aubrey Peeples stars as Jerrica Benson, better known as Jem, an orphan musician who becomes a viral sensation on the internet and who goes on a music-drive scavenger hunt with her cohorts. The rest of the band is made up of Kimber (Stephanie Scott), Aja (Hayley Kiyoko), and Shana (Aurora Perrineau). I’m just saying, the Misfits and the Stingers better show up somewhere in all this madness.

Hopefully this John M. Chu (Step Up 2: The Streets, G.I. Joe: Retaliation) joint will stand up there in pantheon with the likes of Josie and the Pussycats. Probably not, but a guy can dream, right? Jem and the Holograms doesn’t open until October 23, so we’re bound to see way more before then.
Posted by Brent McKnight at 1:13 PM

Email ThisBlogThis!Share to TwitterShare to FacebookShare to Pinterest
Labels: Adaptation, Jem and the Holograms, Music, news