'Inside Out' Movie Review 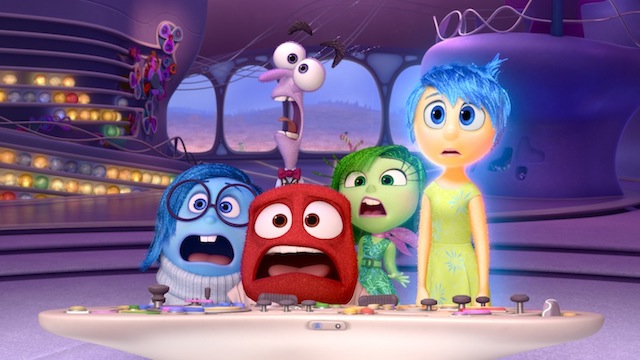 Pixar’s latest opus, Inside Out, stands close to the summit of the studio’s considerable mountain of work. I don’t think it is quite up there with the likes of WALL-E, Up, and a few others, but it’s not far off, definitely in the upper echelon, which puts it head and shoulders above most movies, animated or otherwise. It’s an ingenious, moving story about the pain of growing up and handling big, new emotions that delights older and younger viewers alike.

Riley is a young girl living an idyllic life in Minnesota. She has two loving parents, great friends, loves to play hockey on the frozen pond out back, and is a great, happy kid. Until one day her family moves to San Francisco, presented as a cramped, ugly, sad city where the pizza is weird, she doesn’t have a yard, and all her friends are thousands of miles away.

Here’s what sets Inside Out apart: instead of telling the story from Riley’s perspective, it is told from the perspective of her emotions. Inside her head emotions like Joy (Amy Poehler), Sadness (Phyllis Smith), Fear (Bill Hader), Anger (Lewis Black), and Disgust (Mindy Kaling) work to make memories, react to the outside world, and steer her along in her life. That becomes more difficult after the move, and when Joy, Sadness, and a collection of Riley’s core memories become lost in the wilderness of Riley’s psyche, they struggle to find their way back to headquarters before the inner workings of Riley’s mind, and everything that makes her who she is, are gone forever. 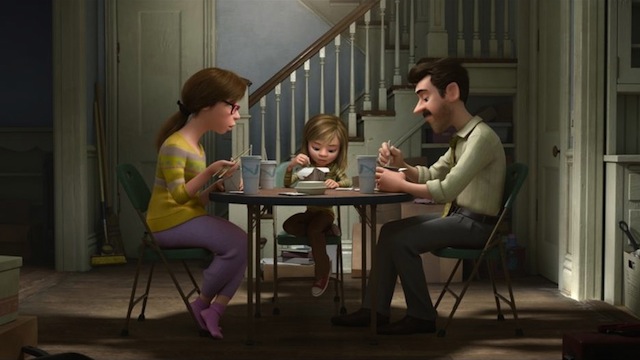 The stakes may not be life or death, but they’re somehow higher than that. Riley is in danger of losing herself, of losing who she is; with the loss of these core memories she is on the verge of losing all the things that make up her personality. Watching her memory islands quiver, crumble, and fall into the void of forgetfulness, you’re more invested in whether she keeps playing hockey or runs away from home than if the hero of whatever summer blockbuster gets eaten by a dinosaur, blown up by a robot, or saves his family from an earthquake (and I liked all three of those movies, by the way). You care about Riley, you don’t want bad things to happen to her, and you want her to continue to be able to feel everything truly and deeply. It’s never a question of if Joy and Sadness are going to be able to get back to headquarters, the question is how their absence, even for a relatively short time, is going to impact and shape Riley.

As fantastic and imaginative as Inside Out is, at its core, the film is a realistic, at times startlingly harsh look at the death of childhood and the process of growing up. To be honest, this might be to the film’s detriment. While older audiences will likely connect more to the material because of this, because this is a shared trauma we’ve all lived through, it might miss the mark with some younger viewers, though there is more than enough adventure and candy-colored action to keep them occupied.

Pixar has never shied away from being sad and serious, just look at the opening of Up if you need a reminder of that, and that’s what makes Inside Out stand out. There’s a complexity to the emotion here that involves learning that you can’t just be joyful and happy (one dimensional) all the time, that’s simply not possible, and that even what appear to be negative emotions, like Sadness, have an important role to play, creating balance, and leading to better things. Your investment sneaks up on you, too, as you find yourself tearing up out of the blue where you don’t expect. 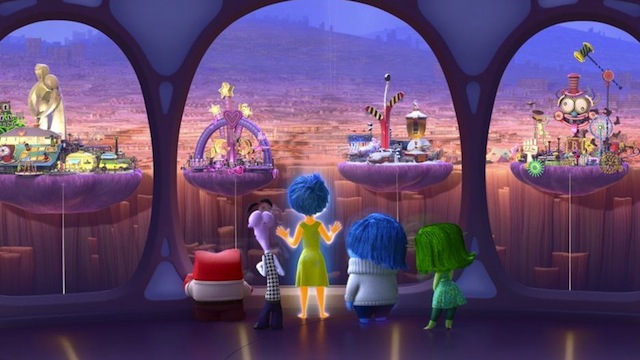 Inside Out is, of course, a visually stunning film, and the rendering of the inside of a little girl’s mind is nothing short of breathtaking. You expect nothing less from Pixar (it’s funny how we would be disappointed if it wasn’t gorgeous), and they don’t let you down. Not only are there bright, imaginative set pieces—one sequence involving the deconstruction of abstract thoughts is particularly wonderful—but those are juxtaposed against the dark recesses of Riley’s mind, like her carefully guarded subconscious, where she hides all her deepest, darkest fears, or the ashen sadness of the pit where old memories go to, very literally, die when they are forgotten.

The only real knock against Inside Out is that it spins its wheels a bit in the middle as Joy and Sadness hit a narrative plateau and fall into a repetitive pattern. They have a plan, it fails, they’re back to square one, repeat. Pace wise, it stutters just a bit right when you want it to move forward, and you see where they’re going before they get there. You come to the realization that Joy ultimately finds well in advance of her, and from a structural standpoint, the story is generally predictable. But they throw in enough bells and whistles and spectacle, not to mention nuance, that this isn’t a huge issue or distraction.

Inside Out is the kind of movie that, watching it in the theater, I enjoyed, though I wasn’t as over the moon as some. I found it cute and fun and engaging, but the more I think about it, break it down, and examine the various themes and layers, the more my affection and appreciation grows. This is a movie that will benefit from the deserved multiple viewings it is sure to receive, and that will only grow in estimation over time. [Grade: B+/A-]

Posted by Brent McKnight at 8:04 PM