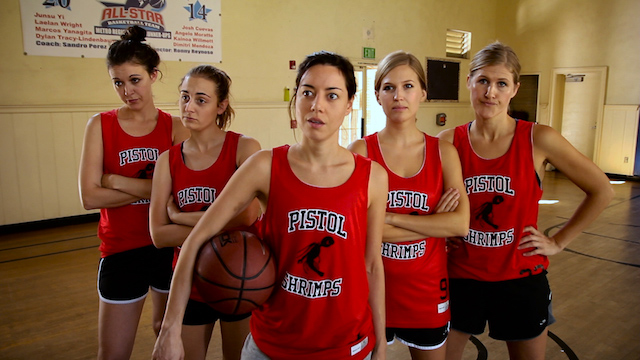 A documentary about a rag-tag group of comedians, actresses, writers, and other women playing in a Los Angeles recreational basketball league sounds like a lark, right? Like it may be an entertaining momentary distraction, but not much more. While director Brent Hodge’s (A Brony Tale, I Am Chris Farley) The Pistol Shrimps is very much that, it’s also sweet and heartfelt, in addition to being funny as shit.

Bowing at the Seattle International Film Festival, The Pistol Shrimps toys with the tropes and clichés of triumphant sports documentaries. Though maybe not world-changing, there’s a sly feminist streak and much more depth and substance than the lighthearted humor and outlier subject matter initially belie.

In a town with plenty of leagues for men, there was nothing for women. That is until the Pistol Shrimps came along. Named after an aquatic crustacean that shoots what amounts to an air bullet from one of its asymmetrical claws, a crew of women got together, whipped up enough interest to field a handful of teams, and got the ball rolling. Made up of a wide swath of people, the team features actresses like Aubrey Plaza (Parks and Recreation) and Angela Trimbur (The Final Girls), a woman who edits herself into episodes of The Bachelor, two models, a writing duo, a singer-songwriter, an entertainment lawyer, and more.

One of the originators of the league, the Shrimps are not particularly adept at basketball, at least until this season. On the surface, The Pistol Shrimps follows this misfit crew of mismatched individuals coming together, improving, and chasing the dream an undefeated season after lingering near the bottom for multiple years. In true Mighty Ducks fashion, this is a collection of big, bold personalities coming together for a common goal. The Pistol Shrimps could have easily just been that, a bunch of wild people in the unlikeliest sport imaginable, and wound up a disposable, if engaging, documentary. But as the movie progresses, as it shows the players practice, improve, and gel, it becomes obvious how important this is to the players, and even people beyond the team.

This topic first came into the spotlight when Aubrey Plaza showed up on a couple of late night talk shows with a cane and revealed how she blew out her ACL playing basketball. Everyone thought this was an elaborate joke—which, with her dry, stone-faced sense of humor wasn’t outside the realm of possibility—but she, and the rest, take it much more seriously than most people expect. There’s a deep dedication among the women who participate, both to the team and to each other. They attend each others’ shows, push each other to be better on and off the court, and create a supportive, unapologetic, empowering environment that’s refreshing and moving.

And there was obviously a need for this. In just a few seasons, the rec league blew up, from a handful of teams to almost 30, with fantastic names like the Princess Lay-Ups and the Lucille Ballers. Moderate crowds show up for their Tuesday night games, there are competing fan bases, the LA City Municipal Dance Squad that performs at halftime, and even a two-man podcast play-by-play of all the Pistol Shrimps’ games.

All of this obviously started as a spectacle, as a “look what’s going on over here” style oddity, but it’s grown and evolved into something much more meaningful. The sense of community, within the individual teams and the league at large, shines through, and it becomes clear how important this Tuesday-night women’s recreational basketball league is to a great number of people.

It’s possible to watch The Pistol Shrimps as little more than the story of a unique, admittedly often silly niche subculture. But there’s more if you want it, including a deceptive emotional weight and understated progressive streak that flows beneath the hilarious surface currents. [Grade: B]

Posted by Brent McKnight at 1:50 PM