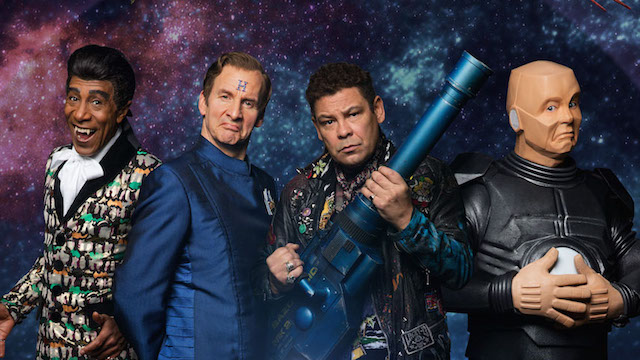 Red Dwarf is hands down my all-time favorite TV show in the history of forever. Nothing even comes close. Multiple times in my life I’ve spent 24 hours or more doing nothing but sitting on a couch watching endless episodes of Red Dwarf. A British sci-fi sitcom, what’s not to love? From this is may be rather obvious that the prospect of a new series excites the living hell out of me. A trailer for Red Dwarf XI just blasted into the stratosphere, and I couldn’t be giddier.

Back to Earth, the three-episode miniseries that forms the ninth season of Red Dwarf was…it wasn’t good. And as there was a ten-year gap between Series VIII and IX, and the product was so lackluster, most of us thought the Boys from the Dwarf were dead and gone, lost three million years in deep space.

Then came Red Dwarf X in 2012. Though I was initially skeptical, it was awesome. It was wonderful. The cast may be a little older and look little long in the tooth, but it was everything that makes the series so fucking great. And though this trailer for Red Dwarf XI doesn’t show much, it shows more than enough—the same absurd sense of humor, the same ridiculous characters, the same outlandish science fiction setting.

If you’re unfamiliar with Red Dwarf, you should rectify that situation at your earliest convenience. The plot follows the adventures of Dave Lister (Craig Charles), the lowest ranking member of the crew of a deep space mining ship called the Red Dwarf. Through a series of unfortunate events, the slovenly slacker finds himself stranded in the far reaches of space, three million years away from Earth. His only companions are the hologramatic representation of his deceased bunkmate, the uptight pratt, Arnold Rimmer (Chris Barrie); a neurotic maintenance droid, Kryten (Robert Llewellyn); and a humanoid creature descended from the domestic housecat, Cat (Danny John-Jules). And shit gets wackier from there.

The six-episode eleventh season of Red Dwarf hits Dave in the U.K. on September 22. At the moment, I can’t find any word about a release stateside, but I’ll keep my eyes peeled. If you’re curious about the episode titles and a synopsis for each one, you can find that information below. But if you want to go in cold, I suggest you stop reading now. Side note, we also have a Red Dwarf Series 12 in the works, so there’s that to look forward to.

Twentica—The Dwarfers find themselves in an alternative version of America where modern technology is prohibited, making Rimmer and Kryten illegal. The Dwarfers infiltrate the tech savvy underground and try to bring down the authoritarian regime.

Samsara—When the Dwarfers investigate a crashed ship at the bottom of an ocean moon, Lister and Cat become trapped together and Lister's nightmare begins. Meantime Rimmer and Kryten discover the ship is controlled by a dark force.

Give and Take—After an altercation with a deranged droid Lister has his kidneys organ-napped. The only solution is to ask Cat, the most selfish creature in the universe, to give him one of his.

Officer Rimmer—After a scandalous piece of good fortune Rimmer saves the life of a bio-printed Captain and is promoted, fulfilling his life-long dream of becoming an Officer. He immediately opens an Officer's club, which is out of bounds to the lower orders, and uses the bio-printer to fill it with versions of himself.

Krysis—Kryten has a mid-life crisis and changes his body cover from Mech grey to Ferrari red. The posse try and show him how much he's achieved in life by taking him to visit a mechanoid from his old fleet.

Can of Worms—Cat takes time off from being in love with himself to fall head over heels in love with a lady Cat with a big secret.
Posted by Brent McKnight at 9:42 AM