Holy Shit, 'The FP 2' Is Happening And You Can Help 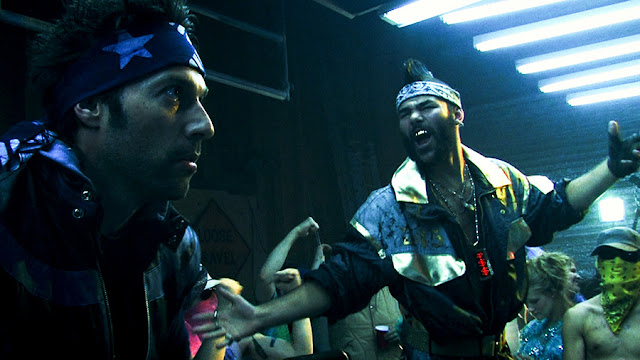 If you haven’t watched the Trost Brothers’ The FP, do yourself a favor, drop whatever you’re doing, and rectify that oversight. It’s a movie I once described as “like watching the hyperactive, sugar-fueled bastard child of The Warriors, Japanese pop culture, and a hillbilly bounce all over the screen.” Well now there’s a sequel, Beats of Rage: The FP 2, in the works, and you can help Beat-Beat this shit into reality.

So, The FP takes place in a vaguely dystopian near future where rival street gangs settle their disputes the way the good lord always meant for them to be settled: by competing in a Dance Dance Revolution style dance game called Beat-Beat Revelation. It’s nuts, and Beats of Rage also looks fucking insane.

Writer/director Jason Trost, who also stars as JTRO, takes over solo directing duties this time around. (His brother, Brandon, co-directed The FP, and is the cinematographer on like billion huge movies, but is apparently sitting this one out). Reportedly a large chunk of the movie has already been filmed, but click here to support their Indiegogocampaign to finish the rest.

Just look at this extended clip and you’ll get a pretty good idea of what to expect from Beats of Rage. It’s certainly not for everyone, but hot damn, I feel the need to Beat-Beat right now.

Here’s what Beats of Rage is all about if you’re into that sort of thing:

In a dystopian future... the world is in a booze drought. Disputes are fought to the death via the dancing arcade game Beat-Beat Revolution, which has absolutely no relation to Dance Dance Revolution. Alternate Reality yo.

In this ghetto ass fantasy, in order to save The FP once again... again, JTRO -The Beat-Beating champion from a legendary bloodline of beat-beaters and KCDC – his mystical hype man, must quest deep into The Wastes, a world decimated by the beat wars, in order to compete in the ancient Beat-Beat tournament, “Beats of Rage".  JTRO travels deep into the realm of his birthplace where he must dig deeper than six feet to vanquish the self-proclaimed lord of the Wastes, AK-47.  Will JTRO fulfill KCDC’s prophecy?  Will he be able to RENIG before it’s too late and save The FP from runnin’ dry once and for all?

And here’s a teaser trailer from a few months back. (Seriously, how did I miss this shit?!):

If you have some money and want to toss it into an insane whirlwind of a motion picture, consider sending a few bucks towards Beats of Rage: The FP 2. In theory, this kicks down the doors sometime in 2018, but we’ll have to wait and see.
Posted by Brent McKnight at 11:35 AM

Email ThisBlogThis!Share to TwitterShare to FacebookShare to Pinterest
Labels: Beats of Rage: The FP 2, Dystopian, Jason Trost, news, The FP, The FP 2

Need any extras from Frazier Park or another actor?

Dude, you should hit up the filmmakers, that would be dope as hell!