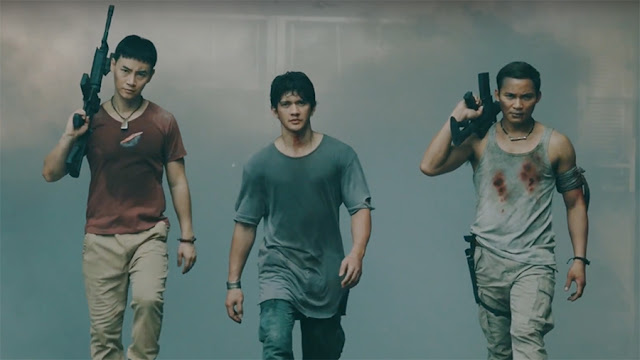 Triple Threat is all of my favorite things wrapped up in one convenient package. Action, martial arts, gunplay. Oh, and it stars every cinematic badass currently working. The credits include Tony Jaa, Iko Uwais, Tiger Chen, Scott Adkins, Michael Jai White, JeeJa Yanin, Michael Wong, Michael Bisping, and Celina Jade. I hope I didn’t forget anyone, but I may have, the list is long and distinguished. As you may imagine, I’m beyond excited for Triple Threat, and that anticipation just took another huge leap forward with the first trailer. Check it out after the jump.


Sometimes, just sometimes, everything is so, so right with the world, and this is one of those times.

Directed by Jesse V. Johnson—who also helmed the Scott Adkins starring Savage Dog, which looks rad and also comes out soon—Triple Threat dropped this trailer for San Diego Comic-Con. Wasn’t that nice of them? And if the idea of this movie was enough to start you salivating, the actual footage may make your head explode.

Triple Threat is a project that’s been in the works for some time under various titles. It went through multiple iterations, with multiple directors. (At one point Tiger Chen, Tony Jaa, and Iko Uwais were signed up for something called Makeshift Squad, and one version of Triple Threat had John Wick’s Chad Stahelski momentarily attached to direct.)

Regardless of how it got here, or how many times it got reworked, it’s here, and holy hell, I’m pumped. This has everything I dreamed of. There are badass throwdowns from the best in the business, slick looking gun battles, action, intrigue, and even an elephant thrown in for Tony Jaa’s sake. (The man loves him some elephants.)

The plot is simple and stripped down, but just what this kind of movie needs:

A hit contract is taken out on a billionaire’s daughter intent on bringing down a major crime syndicate. A down and out team of mercenaries must take on a group of professional assassins and stop them before they kill their target.

Just the other day, Deadline reported that Well Go USA picked up the North American distribution rights to Triple Threat. That’s a move very much in their wheelhouse, and I can’t thank them enough. There’s not hard-and-fast date set at the moment, but they reportedly have their eye on an early 2018 release. You can bet your ass that I’ll be all over this beat.
Posted by Brent McKnight at 9:40 AM