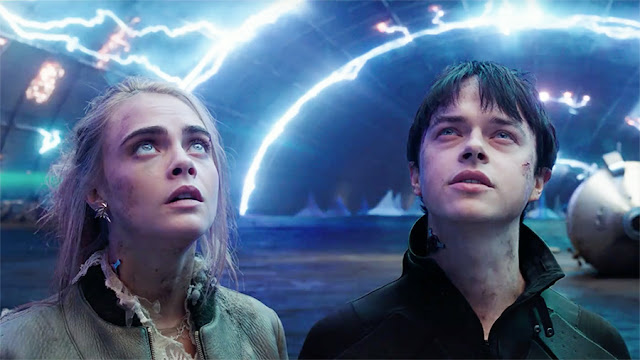 We don’t get to see Luc Besson’s Valerian and the City of a Thousand Planets until later this month, but hot damn, I’m primed for some bananas space-crazy. But just in case you’re not in the same boat, check out these five new clips.

Early reviews have been mixed, but the handful of folks who’ve seen Valerian and the City of a Thousand Planets (which is an unwieldy mouthful of a title) concur it’s a visual spectacle. Which is mostly what I care about. It stars to beautiful wooden children (Dane DeHaan and Cara Delevingne), but all I want is some sci-fi lunacy. And these glimpses certainly offer that and more.

Easily the most plot-heavy of the clips, this shows off the bug-nuts visual style. It’s easy to see why Valerian garners so many comparisons to The Fifth Element—they bear definite visual similarities. And I am super on board with a spiritual sequel.

As for the plot, here’s a synopsis:

In the 28th century, Valerian (Dane DeHaan) and Laureline (Cara Delevingne) are a team of special operatives charged with maintaining order throughout the human territories. Under assignment from the Minister of Defense, the two embark on a mission to the astonishing city of Alpha—an ever-expanding metropolis where species from all over the universe have converged over centuries to share knowledge, intelligence and cultures with each other. There is a mystery at the center of Alpha, a dark force which threatens the peaceful existence of the City of a Thousand Planets, and Valerian and Laureline must race to identify the marauding menace and safeguard not just Alpha, but the future of the universe.

This clip gives us a good idea of what some of the non-space action looks like. It also provides ample face time with one of the many weird-as-hell creatures we can expect to see.

Again, Valerian stars two beautiful wooden children, so I don’t know how much audiences are going to get out of that, but lordy, does it look spectacular.

There’s a definite Star Wars vibe going on in this clip, at least aesthetically. You may sense a theme here, but the more I watch, the less certain I am that these two leads can carry the entire film. But maybe I’m wrong, we’ll see.

Thanks to scenes like this, I can’t wait to see Valerian blasted across the biggest screen I can find.

From the early reactions, Valerian and the City of a Thousand Planets is inventive and gorgeous and full of fantastic world building. Some of the story reportedly leaves much to be desired, but it’s amazing what eye-popping visual mayhem can make up for. And we’ll find out just how much it needs to make up for on July 21.
Posted by Brent McKnight at 8:49 AM