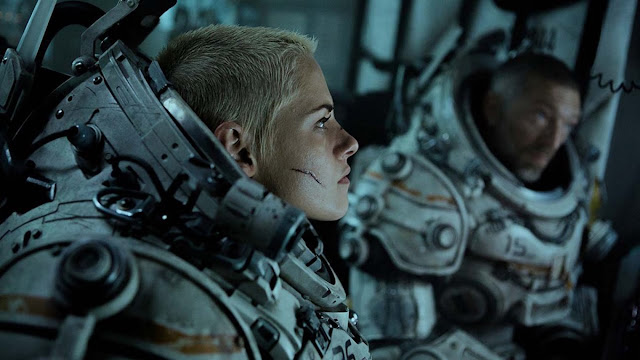 Deep sea creature features tend to take a lot of guff for trying to be Alien but wet. I, for one, have zero problem with that. Space is hazardous, and the deepest reaches of our terrestrial oceans are equally harrowing in many of the same ways. So if movies like Leviathan and Deep Star Six (people often throw in The Abyss to concoct a trilogy, but James Cameron’s movie is in a whole other stratosphere) want to make shitty Alien-at-the-bottom-of-the-sea riffs, I am here for that. Director William Eubank’s Underwater definitely falls into this category, and it’s precisely as shitty and awesome as I wanted it to be.

Underwater already has a few checks against it in the public perception. It’s an early January release, it’s an early January horror release, it looks like absolute trash, and it’s been delayed time and time again. Principal photography wrapped up in 2017, and it has all the hallmarks of a movie the studio has written off and is dumping in a cinematic dead zone, hoping to recoup at least a portion of the cost. With a budget of $80 million, there are obvious signs of studio tinkering and interference. It’s messy and jumbled and rushed and feels like it starts in the second reel. 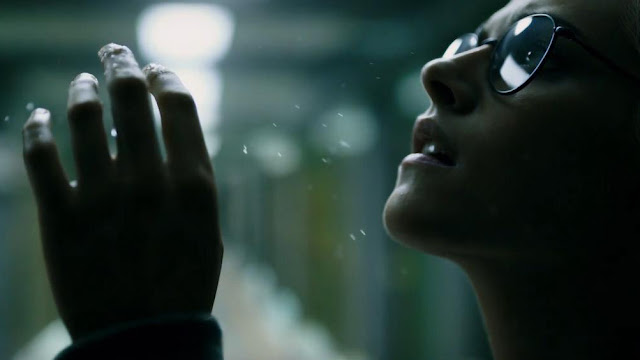 Underwater also kind of rules. Sure, Brian Duffield and Adam Cozad’s script cribs from the submerged monster movies already mentioned, as well as The Descent, Lovecraftian mythos, and Ridley Scott’s 1979 classic. But that’s not a bad thing. If you’re going to steal, steal from the best. Part of the benefit of starting in act two is that the movie hits the ground running and doesn’t stop. And with good reason, there are plot holes and gaps and things that would make an audience pause if there was any time. It wastes precious little space on background or science or character, and when it tries, that’s when the momentum flags. Plus, there are monsters and Kristen Stewart getting the chance to do her best Ripley impersonation.

The plot revolves around the crew of a drilling station at the bottom of the Mariana Trench, the deepest spot on Earth. It’s dark and cold and isolated, and like three minutes in, there’s an earthquake, or something. The facility takes critical damage and a handful of crewmembers—Norah (Stewart), the Captain (Vincent Cassel), Paul (T.J. Miller), Emily (Jessica Henwick), Rodrigo (Mamoudou Athie), and Smith (John Gallagher Jr.)—must find a way to survive and escape. 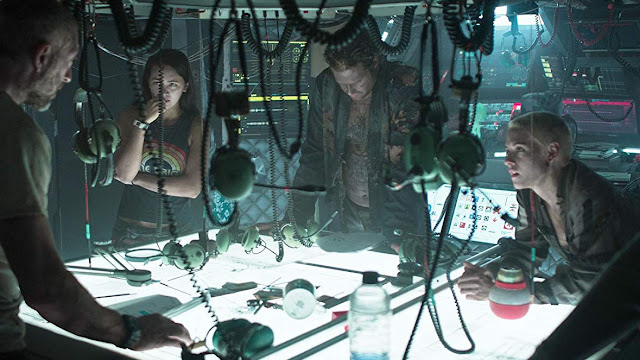 It’s standard contained horror. Place a limited group of characters in a hostile environment, put a ticking clock on the situation, make every move potentially deadly, and make things worse with every step. We’re talking escalating tension 101, but combined with a frantic pace—just when the characters think they can rest for a moment, everything goes to hell—it works well enough to ratchet up the pressure.

And there are monsters! Where they come from, who knows? And who really cares? The movie certainly doesn’t. The opening credits are a clip show of news articles about mysterious events and strange anomalies plaguing this project. We get allusions, oblique asides, and hints, but never any real answers. Was this actually an earthquake? Maybe it was something else. Whoa. It’s enough to start the ball rolling. 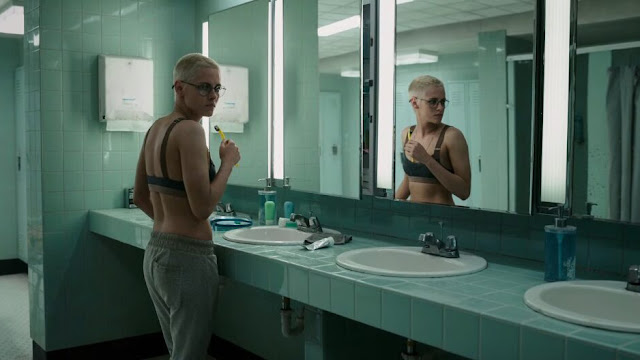 Stripped down to the bare components as it is, we see snippets of the broader story Underwater excised along the way. The movie begins with voice over from Norah talking about how the isolation messes with the mind, she has a past she’s running from, and maybe she’s losing her grip—it’s implied she’s been down there much longer than others. It’s the same with the rest of the characters—brief mentions of life outside of this moment, but nothing else. It would be fascinating to read the original script and see what the creators intended this to become. Throughout the movie, you can point to moments where there used to be more, but it’s gone now.

The strategy of letting us learn about a character by their actions under duress can work, it just doesn’t here.  Outside of Norah, there’s no one even remotely interesting. Stewart does what she can to create some texture and personality, which is much more than another actor might be able to achieve. But in the end, she’s still a shadow of what Hollywood thinks a strong female action hero has to be (e.g. a Ripley clone), and they still find excuses to show her in her underwear as much as possible. 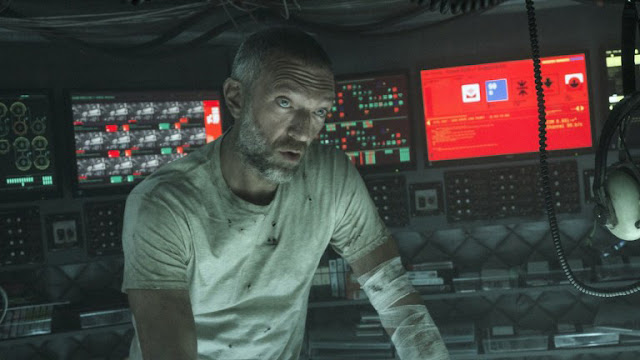 Cassel sleepwalks through his role as the stalwart Captain. There are worse people to watch phone in a part, but there’s nothing particularly engaging about him. As one might expect, Miller provides the comic relief, or at least the tired, toothless attempts—there’s a 20,000 Leagues Under the Sea joke where his delivery feels like him asking, “Do I have to say this?” His usual deadpan sarcasm plays like he absolutely does not give a shit and can’t wait until the moment his character gets to die so he can leave.

All of the various issues aside, Underwater’s biggest problems are mechanical. It looks and sounds like absolute garbage. Not the score. The music from Marco Beltrami and Brandon Roberts actually kicks a lot of ass in a John-Carpenter-under-the-sea kind of way. However, so much of the movie takes place with the characters in heavy suits, talking over crackling coms, the dialogue ends up garbled and muted and almost impossible to decipher at times. It’s probably very realistic and true to the circumstances, but it’s less than ideal as a viewing experience. 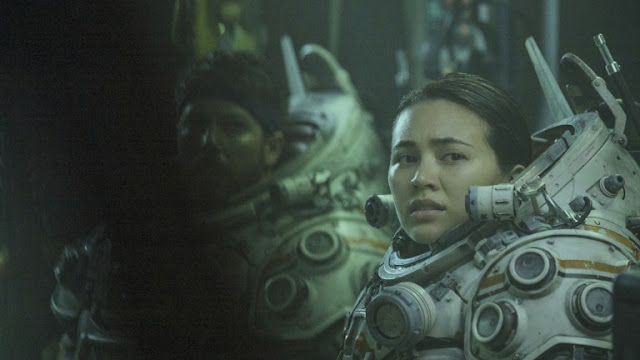 The same can be said about the visual aesthetic. Most of movie takes places as the characters walk along the bottom of the ocean. We get it, it’s dark and murky and hard to see, and again, the movie captures this in what’s probably a somewhat realistic way. But it sucks to watch. Instead of creating a claustrophobic, disorienting effect, it’s murky and muddy, which makes much of the action incoherent. Ugly, grubby shades of blue and gray all blend into one amorphous blob. Even the Cthulhu-style monsters, which could have been cool, fade into the background, little more than blurry smudges.

All of this is a shame, because one of the strengths of William Eubank’s previous film, the 2014 indie sci-fi mystery The Signal, is how it looks. It’s a crisp, clean movie, with clear, articulate action. We see glimpses of that inside the drilling facility, but everything outside of that, the bulk of the runtime, looks like it was filmed in a closet with digital effects rendered on a dying laptop. 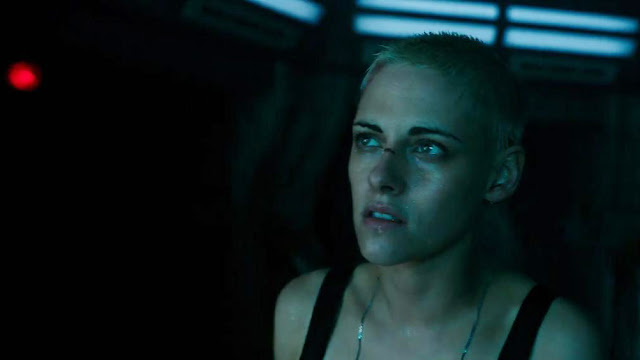 Despite myriad egregious problems that are sure to turn off many viewers, I had a damn fine time with Underwater. (Even that title is uninspired.) At 95 minutes, it probably could have trimmed even further, and the studio meddling adds a few asinine touches. But while it’s shitty, it’s shitty in a really fun way I totally appreciate. Rad B-movie schlock, this feels like an artifact from the late-1980s and delivers exactly what I hoped it would. And if Kristen Stewart gets the chance to play more action hero characters, I won’t complain. [Grade: C+]