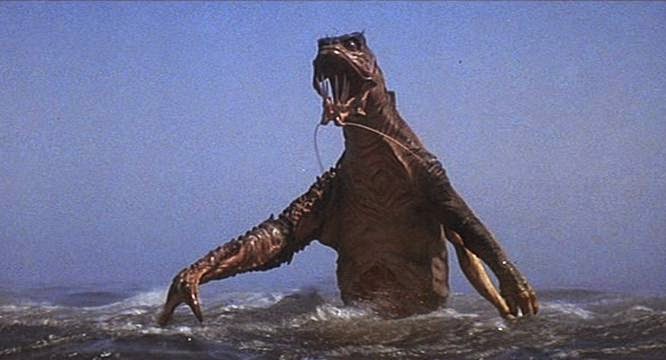 When I was a kid I absolutely loved Leviathan. And just to be clear, we’re talking about the 1989 Alien knock off, not the Leviathan from this year, also known as Russia’s official entry into the foreign language Oscar race. They’re two very, very different movies.

Just as Die Hard led to a whole subgenre of “Die Hard on a blank” movies—for example, Under Siege is often referred to as Die Hard on a boat, and Passenger 57 is essentially Die Hard on a plane—Ridley Scott’s sci-fi/horror classic spawned a slew of Alien on a blank movies. Leviathan is Alien underwater, it even says so on the box for the new Blu-ray from Scream! Factory.

As a youngster, I enjoyed this movie as it was intended, as, for lack of a better description, the fact that it was Alien at the bottom of the ocean. After all, those great depths share a number of parallels with deep space, as far as environments go. You’re isolated, contained, trapped inside of a metal box, and the exterior forces can kill you if you make even the most minor mistake. Like space, so many things can go so horribly, horribly wrong at the bottom of the ocean. That right there adds an inherent level of tension to any narrative, and it worked on my, admittedly, unsophisticated palate.

Still, as both the movie and I aged, I still maintain a fondness for this title, and now I appreciate Leviathan on an entirely different level, as an awesome artifact of ‘80s genre cheese. Directed by George P. Cosmatos, a man most known for such Sylvester Stallone vehicles as Rambo: First Blood Part 2 and Cobra, Leviathan plays like cheap, schlocky, caffeine-hyped attempt at sci-fi Hitchcock, with a healthy dose of John Carpenter horror thrown in for good measure. From the score to the countdowns to the audience as voyeur—and all the way down to the use of staircases—this is like a lunatic’s wing nut take on the Master of Suspense. This all adds up to a decent level of tension at times, and it’s a total blast to boot.

There’s a mining operation happening on the ocean floor, and if you didn’t realize how dangerous such an environment this is right away, title cards tell you that it’s “extremely hazardous.” The crew of one of mining shacks is on day 87 of a 90-day stint, and what could possibly go wrong? You’ve likely seen enough movies to know that the answer to this question is that everything can go wrong. It starts with one member of the crew almost dying as his underwater suit malfunctions, and before long, after discovering the wreck of a mysterious Russian ship, they’re fighting for their lives as a genetically altered disease tears through their ranks, turning the crew into hideous monsters.

The cast is like the first team at the B-movie all-star game. You’ve got Peter Weller as the completely charisma-less leader, Beck, who delivers all of his lines as if he’s still stuck in his RoboCop monotone. This was really the last gasp in the era of Peter-Weller-as-movie-star. Rambo’s boss, Richard Crenna, plays the preternaturally smart Doc, who looks at this thing no one has ever seen before and just knows, right off the top of his head, what’s going on. If you’re asking yourself how he got stuck in a tin can at the bottom of the ocean, the only explanation given is that there was an incident. He may know more than he lets on.

Then there’s Amanda Pays, Ernie Hudson, Hector Elizondo, and Lisa Eilbacher. This supporting quorum is rounded out and highlighted by Daniel Stern’s skeevy scumbag Sixpack. Always a dirty joke on his lips and gawking at every available set of breasts, he’s just a little bit sweaty at all times, and looks like he’d be greasy and slippery to the touch.

Leviathan is a situation of ever-escalating problems. First, everyone is cranky and tired and wants to go home. Then they find this mystery ship, discover the plague, which kills people, though they don’t stay dead—the creature effects are a bizarre mishmash that, at times, look like you melted a plastic Howard the Duck toy—the parent company is somehow involved, or at least knows about the dangers, and to top it all off, there’s a hurricane on the surface so a rescue crew can’t even come pick them up. Sucks to be these folks.

This all culminates into a conclusion that leaves you scratching your head and asking, huh? But at the same time, Leviathan ends in a perfect ‘80s moment, one that, while totally confusing, succinctly sums up the low-budget knock-off culture of the decade. This might not be a Cannon Films joint, but it certainly feels that way, like they watched Alien and didn’t really get what was going on.

Scream! Factory usually puts together strong packages for their releases, and Leviathan is no exception. It may not be the best one they’ve ever assembled, but it isn’t bad. The Blu-ray comes with multiple covers, so if you’re into that sort of thing, you have options. And even though the sets look dated and hokey, the picture is sharp and clear. A pair of lengthy interviews augments the film: one with Elizondo, dissecting his pessimistic everyman character Cobb, and another with Hudson, talking about building a family and surviving the process of production, among other topics. These clock in at 12 and 15-minutes, respectively.

The centerpiece of this disc is a 40-minute behind the scenes featurette called Monster Melting Pot, that, as you may have guessed, primarily focuses on the creature side of things. Stan Winston and his legendary special effects team handle this element, and while the beasts look like you torched a bunch of action figures and smooshed the remains together, they’re still great in an over-the-top, ridiculous way. The dive suits, however, look fantastic. One fun fact: there were three bottom-of-the-sea movies in production at the same time—along with Leviathan, there was fellow low-budget horror Deep Star Six, but also James Cameron’s The Abyss. And this segment is full of all kinds of anecdotes and stories that make for a pretty good time. 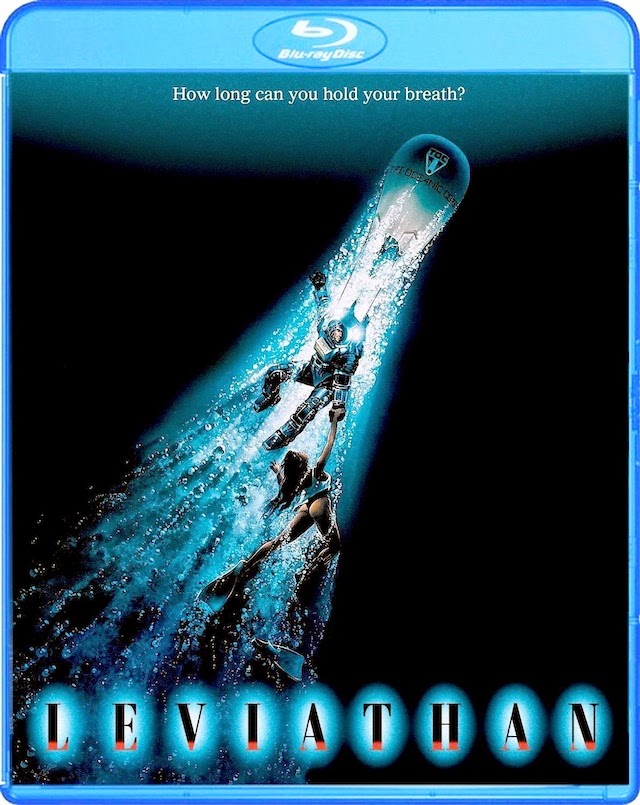 Posted by Brent McKnight at 2:02 PM