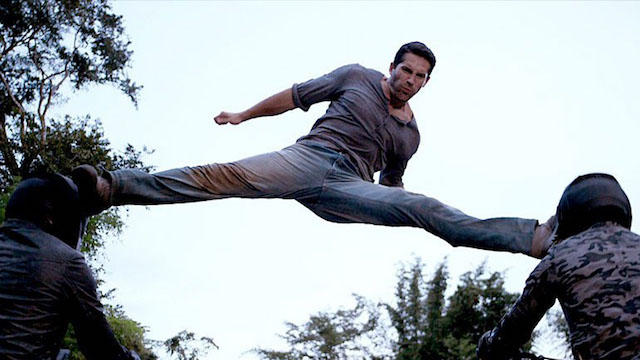 I’ve long maintained that Hard Target, while not John Woo’s best American movie, is the most reminiscent of his legendary Hong Kong work—the most similar in size, scope, and scale. It makes sense, coming as it did, just a year after his bullet opera masterpiece Hard Boiled, the capper on an epic six-year run that included A Better Tomorrow 2, The Killer, Just Heroes, Bullet in the Head, through Once a Thief.

Now, a sequel, especially one twenty-plus years after the fact, has some big shoes to fill. Aside from the name and general premise, there’s not much to link Hard Target 2 to the Jean-Claude Van Damme-starring Hard Target. And whether or not the name fits is a subject we can debate. (I do love that someone out there appreciates there’s enough name recognition and corresponding adoration that it’s possible to cash in on the Hard Target moniker, even in modest DTV form.)

If you’re going to make Hard Target 2, you damn well better have an appropriate front man. And this most certainly does, as it stars perennial badass, Scott Adkins. If he existed in a different era, we’d talk about Adkins, who consistently turns out the strongest DTV action flicks out there, with the same reverence as guys like Steven Seagal, Jean-Claude Van Damme, and Chuck Norris in their respective heydays. While he may not be as big a star as he should be, he’s developed his own rabid following and cinematic niche. And it just so happens his niche is my favorite niche. Even if he doesn’t have a sweet, curly mullet to bounce in slow motion or a faux Cajun accent, I can’t think of anyone else I’d rather lead this movie.

Director Roel Reine is also a solid choice for the material. The Dutch helmer has carved out his own niche piloting follow ups to earlier action movies—his resume includes multiple Death Race sequels, The Man with the Iron Fists 2, The Marine 2, and more along similar lines. 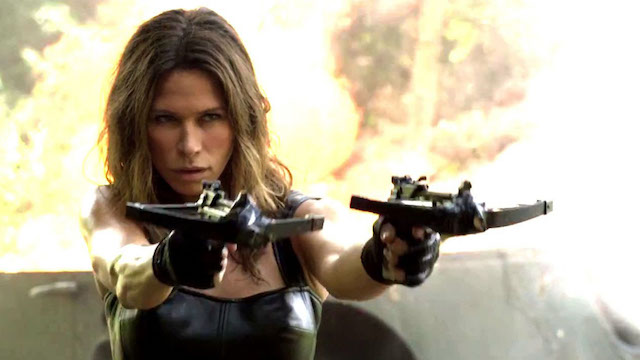 Also the director of photography, Reine’s usual workmanlike approach gets a bit of a stylistic upgrade. Channeling his inner John Woo, the director crams Hard Target 2 full of aesthetic nods to its predecessor. The first shot is of a pigeon, which segues quickly into a foot chase through the gritty streets of a seedy city. Much of the action is filmed handheld, and sweeping helicopter shots and slow motion tip their caps to Hard Target. There’s even a nice Mexican standoff on a railroad trestle and Scott Adkins walking as doves soar around him.

He doesn’t match John Woo in any way, but Reine does his best to give the film its own visual personality. Perhaps most importantly, he doesn’t get in the way and lets Adkins do what he does best.

If you expected to pick up with the wayward son of JCVD’s Chance Boudreaux and Yancy Butler’s Nat Binder, you’re in for a disappointment. Adkins plays Wes “The Jailor” Baylor, an MMA fighter who has zero connection to the earlier film. After killing his best friend in the ring, Baylor retreats to Thailand, depression, and booze. Scraping by plying his trade in underground fights for whiskey money and punishment he thinks he deserves, he encounters Aldrich (Robert Knepper), a shady promoter who promises a big payday. Turns out the big payday isn’t so much a fight as it is a bunch of twisted rich folk who paid a bunch of money to hunt a dude through the jungle.

The plot doesn’t provide any surprises, and this is just the latest cinematic take on “The Most Dangerous Game.” And the fact that Hard Target 2’s script is straight up terrible doesn’t do the film any favors. High on melodrama and cheese, this is the kind of writing where, after tumbling down a hill into the midst of a herd of elephants, Baylor encounters a shoehorned-in love interest, Tha (Anny Truong). Or where Rhona Mitra’s daughter-of-a-billionaire-oil-tycoon pauses mid-fight to expound on how the perks and drawbacks of being born rich turned her into the kind of person who wants to hunt other people. It’s exactly as un-subtle and brutal to watch as it sounds, and every character gets their own info-dump of a backstory. 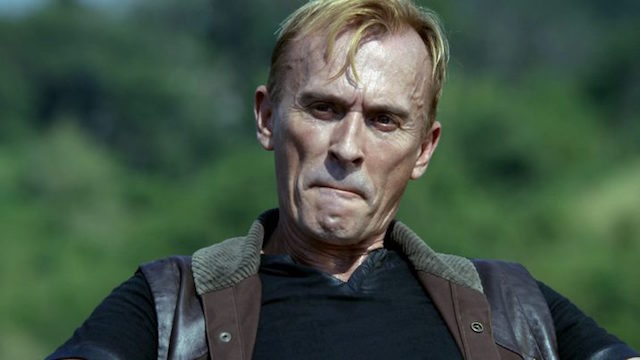 At least Robert Knepper has a gleefully devilish good time chewing on every last bit of scenery in the way he does so well. He’s no Lance Henriksen, but a movie like Hard Target 2 needs a maniacal villain. Just like it also needs a tough guy goon sidekick, a role filled by Arnold Vosloo in the original, but played well enough by Temuera “Django Fett” Morrison this time around. A famous matador (Adam Saunders), an egotistical video game designer (Jamie Timony), and a father and son (Peter Hardy and Sean Keenan) on the worst bonding trip ever, round out the crew.

In reality, this all only exists to prop up the action and get from one fight to the next, which is the strength of everyone involved. With the ubiquitous jungle setting, things do start to get a bit same-y after a while, with one scene blending into the next. Though the action works—we get crossbows, a few rocket launchers, and even motorcycle-mounted machine guns—too many plodding doldrums fall in between. And needless fat could easily be trimmed—there’s no reason this needs to run 104 minutes.

Granted, it’s a lot to live up to, but while Hard Target 2 is a solid DTV actioner, it doesn’t measure up to the potential. Scott Adkins himself has starred in some of the shinning examples of this genre—Ninja 2, Undisputed 2 and 3, Universal Soldier: Day of Reckoning). Pacing issues and hackneyed dialogue distract from the general kickassery. And while this will likely be warmly received by its intended audience (of which I am very much a member), it won’t get much traction outside of that realm. [Grade: C+]

Posted by Brent McKnight at 8:25 AM