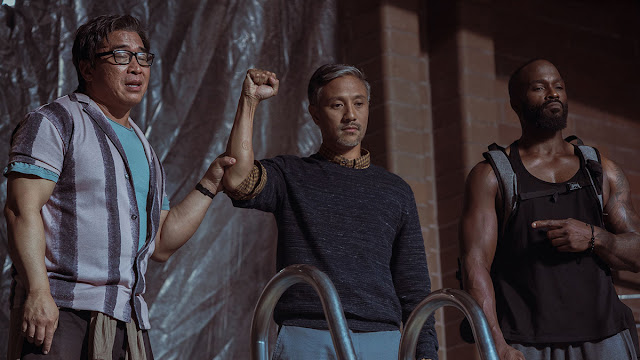 Collider debuted The Paper Tigers trailer and if this glimpse looks like a good time to you, the movie should more than satisfy. But while there’s plenty of fighting, the filmmakers put their own unique spin on the genre and the result is both a competent martial arts movie and a story that feels fresh and different. There aren’t a ton of feel-good face-kicking comedies about revenge, now are there?

Weirdly enough, there aren’t many indie kung fu movies produced in my town, so I’d had my eye on The Paper Tigers for quite a while during development and production. I don’t know anyone involved directly, but Seattle is really just a big small town so like the director went to school with a friend/old roommate, one of the producers is the brother-in-law of a co-worker, that kind of thing. So this feels closer to home than most movies.

And it turned out super awesome, which is even better. I was able to check it out at the 2020 Fantasia Film Festival, where it made its (virtual) world premiere. It’s a blast, full of heart, and it offers a unique take the genre, strained friendships, and various hazards of aging, among other topics.

[Related Reading: All Of Our 2020 Fantasia Film Festival Coverage]

As teenagers, kung fu disciples Danny (Alain Uy), Hing (Ron Yuan) and Jim (Mykel Shannon Jenkins) were inseparable. Fast forward 25 years, and each has grown into a washed-up middle-aged man seemingly one kick away from pulling a hamstring—and not at all preoccupied with thoughts of martial arts or childhood best friends. But when their old master is murdered, the trio reunites, soon learning that avenging their sifu will require conquering old grudges (and a dangerous hitman still armed with ample knee cartilage) if they are to honorably defend his legacy.

Well Go USA will release The Paper Tigers in theaters and on demand May 7. Definitely make the time to check it out.