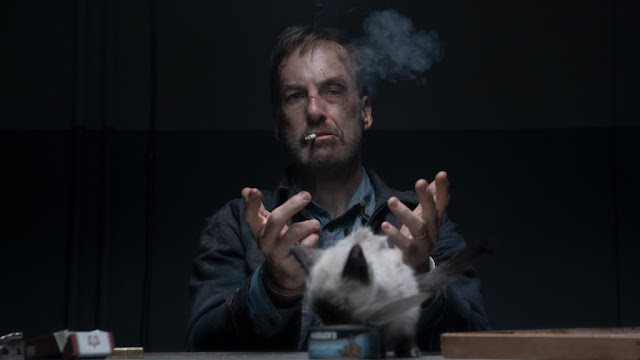 I love it when a movie I’m super excited about turns out to be even more awesome than I hoped. Such is the case with Nobody, which somehow manages to cast Bob Odenkirk in a whole new light, that of a badass action movie star. It’s gleefully violent, funny and strange, and a total high-paced blast end to end.

Because of the people involved, Nobody has already garnered plenty of comparisons to John Wick. While not entirely inaccurate on a surface level, they’re two distinct things, despite a few strands of shared DNA. The biggest are the writer, John Wick architect Derek Kolstad; the fact that Wick co-director David Leitch serves as a producer; and the involvement of the 87eleven team. (87eleven is the stunt and action design company founded by Leitch and Chad Stahelski, who just so happens to be the other co-director of a certain Keanu Reeves vehicle.)

[Related Reading: 'Nobody' Trailer: Bob Odenkirk Goes on a Rampage, and Yes, He Could Beat You Up] 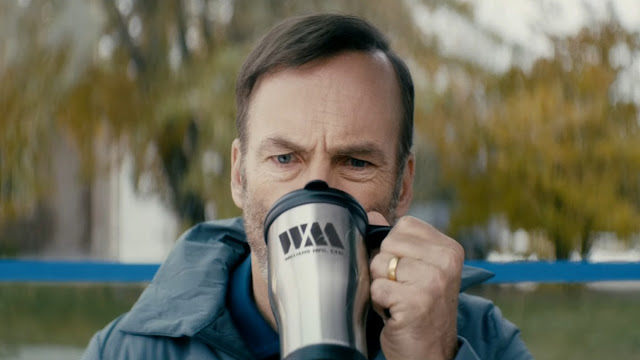 And yes, both movies revolve around a seemingly normal guy who turns out to have a secret past as a total badass and is compelled to come out of retirement by spiraling circumstances beyond his control. But tonally and thematically, the two films diverge, and the closer one looks, the more dissimilar they become. Nobodyis a much lighter film, sure, the violence is ugly, brutal, and unceremonious, but there’s much more humor and joy to find. The action isn’t over-the-top and cartoonish, but there’s an element of manic Looney Toons energy and gooey pulpiness to the carnage. (Maybe it’s John Wick’s goofball cousin visiting from out of town.)

Hutch Mansell (Odenkirk) is a normal, boring guy; a nobody. He has normal, boring guy problems—he misses the weekly garbage pickup; no one respects him, not his wife (Connie Nielson), teenage son (Gage Munroe), or grizzled father-in-law/boss (Michael Ironside); and generally leads a tedious, repetitive existence. When a pair of burglars break into his house one night, it upsets his routine and pushes him to the brink. The cops think he’s a pussy, his macho neighbor wishes they’d broken into his house because he could “use the exercise,” and his son can’t believe his old man’s cowardice. 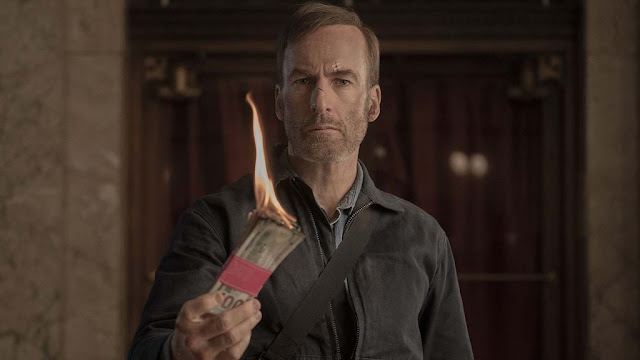 This is all a perfect set up for another tale of a bland straight white guy pushed too far by the perceived slights of a society that doesn’t appreciate him. Fortunately, Nobody avoids falling into that trap. We certainly don’t need another one of those. As it turns out, Hutch has a past, a brutal, merciless past he’s done his level best to suppress. But when it does resurface, it erupts. Part of him relishes splashing around in this long dormant pool of who he once was, while the man he’s become worries about these base internal desires. Ultimately, however, this leads him into a sprawling conflict with a flamboyant, vicious Russian criminal, Yulian (Aleksey Serebryakov), and his handwringing takes a backseat to utter violence.

Odenkirk does a nice job portraying the duality of Hutch’s personality. One on hand, he loves his family and being a milquetoast suburban dad; on the other, he admits maybe he overcorrected and went a tad too bland. And he sells both sides, both the guy next door and the dude you don’t want to see behind you in a dark alley. He imbues Hutch with heart and humor, as well as a mean streak. When he fully dives in, he’s reluctant, but part of him also enjoys this a great deal. And Odenkirk trained for multiple years to be able to pull off the physicality the role requires. 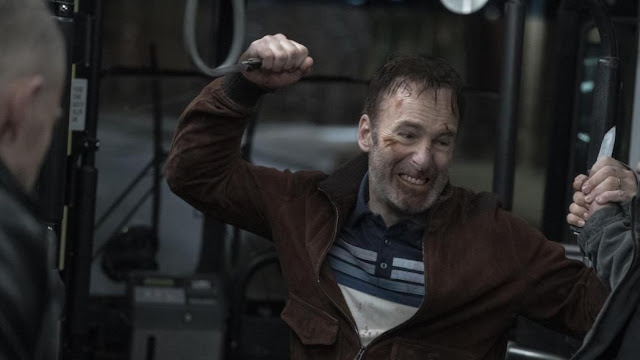 But it’s not the character nuance that’s the draw here. No, it’s the action, and in the hands of director Ilya Naishuller (Hardcore Henry), it whips all kinds of ass. There’s a who’s who of stunt performers, including the likes of Alain Moussi (Kickboxer: Vengeance) and Daniel Bernhardt (Skylines), who are both gritty DTV action leads of some renown in their own right. And Hutch doesn’t just snap to it and pick up right where he left off. No, he has to knock off some rust. He takes his licks and the fights take their toll—punches hurt, teeth get knocked out, bones break. Raw and heavy, the blows add up. But there’s more to the action than just fisticuffs or gun-fu. We get high-speed car chases, running gun battles, and an epic climactic showdown. Not to spoil anything, but it’s up there with the hardware store battle in The Equalizer.

Nobody hits a few bumps along the way. The main baddie isn’t much of a character or particularly interesting, more a collection of personality quirks mixed with a movie caricature Russian gangster. Kolstad’s script generally just doles out information about Hutch’s past at the necessary junctures, and little more, though there are a few inconsistencies. Like, as his wife superglues his first stab wound shut and generally doctors him up without blinking, we get the impression she’s done this before, which might indicate she has some inkling of his violent past. But that falls aside as she appears genuinely shocked by his particular set of skills and how events unfold. 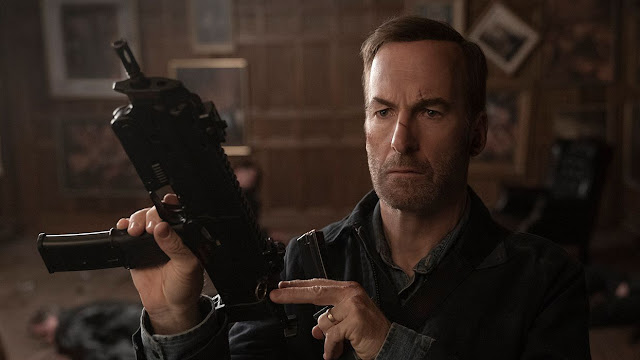 Fortunately, the pace rarely flags long enough for any of these hiccups to do any serious damage. The filmmakers know exactly what this movie does best and what audiences want, and they deliver that in buckets. Bloody, broken-toothed, bullet-riddled buckets. Christopher Lloyd delivers a truly inspired turn as Hutch’s retirement home-living father. And even the soundtrack, which is full of what should-be-groan-inducing on-the-nose needle drops, somehow works perfectly. I watched this with a giant grin on my face and even though it’s early, Nobody is sure to go down as one of my favorite movies of 2021. And please, if they’re this much fun, let Bob Odenkirk keep making action movies. [Grade: A-]

Posted by Brent McKnight at 9:47 AM