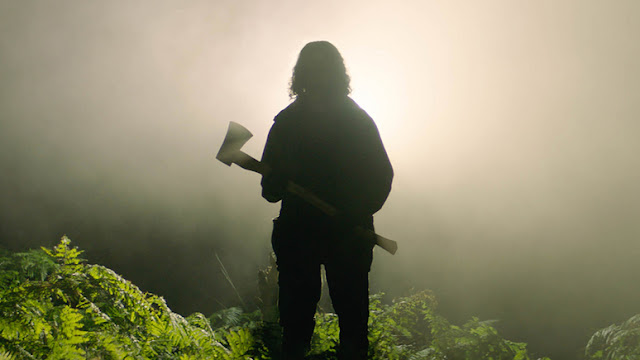 Now this is what we’re talking about. Ben Wheatley is at his best when directing hellish hallucinatory nightmares, and from this trailer for his latest, In the Earth, as well as early buzz from folks who caught it at Sundance, this should fit in snugly in between the likes of Kill List and A Field in England in his filmography. In short, this looks rad and we can’t wait. Take a look for yourself.

This In the Earth trailer may be light on details but it’s heavy as all hell on mood. And that mood is dark and strange and that’s music to our ears. We get flourishes of folk horror, of don’t-go-into-the-woods horror, of don’t-mess-with-ancient-powers-you-can’t-possibly-understand horror, of slasher horror, of cosmic horror, and more. Come on, it rains upward, we’re in.

As the world searches for a cure to a disastrous virus, a scientist and park scout venture deep in the forest for a routine equipment run. Through the night, their journey becomes a terrifying voyage through the heart of darkness, the forest coming to life around them.

This sounds like a much more intriguing type of film than some things Wheatley has made or been linked to recently. Like his Rebecca remake/re-adaptation or Happy New Year, Colin Burstead, which weren’t for us, or rumored/reported big budget studio projects like Meg 2 or another Tomb Raider.

Sure, it might be fun to see what he might do with films like that, but for our money, we’d much rather see him stick to this type of project. And hopefully one day get Freak Shift off the ground in into our eyeballs.

Written and directed by Wheatley, In the Earth stars Joel Fry (Game of Thrones), Hayley Squires (In Fabric), Ellora Torchia (Midsommar), and Reese Shearsmith (High-Rise). NEON picked up the rights and will drop this into theaters on April 23. Don’t be surprised if there’s also a concurrent or at least nearby VOD release for those of us still warry of being in public places full of strangers.