With a movie with a title like Godzilla vs. Kong I only require a few simple things: Godzilla, King Kong, and Godzilla fighting King Kong. That’s is. Anything else is just window dressing. Director Adam Wingard (The Guest, You’re Next) knows this well and delivers plenty of monkey-punching-lizard action. And that rules. That’s all anyone really needs or wants to know.

You want to see these two icons throw down and this movie provides everything the trailers, marketing, and very title promise. Wingard stages the fights in full, clear view—they’re well lit, in the open, shot wide enough to see the action, and hot damn, there’s not a midnight rain storm in sight. Hell, he even proudly wears his 1980s action movie and pro wrestling influences as the two titans collide. (How can you not love Kong off the top rope?) The creature design and effects are fantastic and never ring false. On the giant monster front, this hits everything you want. But as is so often the case in these situations, the problem is everything else. When it’s fun, it’s an absolute blast, but when it’s not, it’s awful. 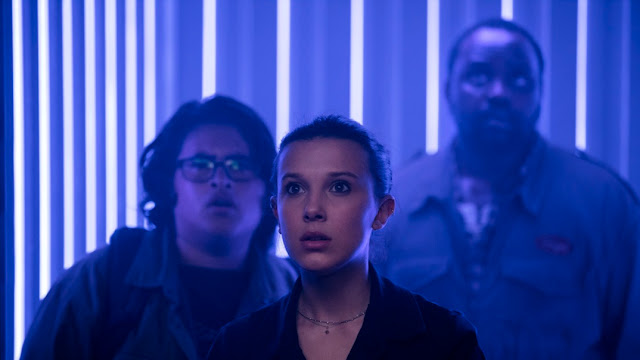 I legitimately hated most of the first half of Godzilla vs. Kong. Every second that doesn’t directly focus on Kong or Godzilla, which is far too many, I found absolutely tedious and uninteresting. The plot is a convoluted jumble of the asinine “Titan” and “Hollow Earth” mythology and spurious scientific logic of this shared “Monsterverse.” Characters toss around vaguely technical words in an overwrought attempt to, poorly, explain the made up nonsense. The pace somehow moves too slow and too fast at the same time, dragging but also skipping over huge chunks.

Dumb is one thing. Dumb can be dealt with. Boring, on the other hand, is unforgivable in a movie like this and that’s the issue with most of the first hour. Again, it’s all the human characters. It’s not the actor’s faults, it’s a weirdly stacked cast, but the overwritten script is just terrible. Ooh, there’s a paranoid podcaster (Brian Tyree Henry); ooh, there’s a failed fringe academic who wrote a far-out book that, while correct, never sold (Alexander Skarsgård); ooh, a billionaire CEO who appears magnanimous on the surface but may have questionable motives (Demian Bichir); ooh, a do-gooder scientist who cares about Kong’s best interests (Rebecca Hall) and is also the caretaker of a deaf indigenous orphan girl who teaches Kong to sign…and also to love (Kaylee Hottle). 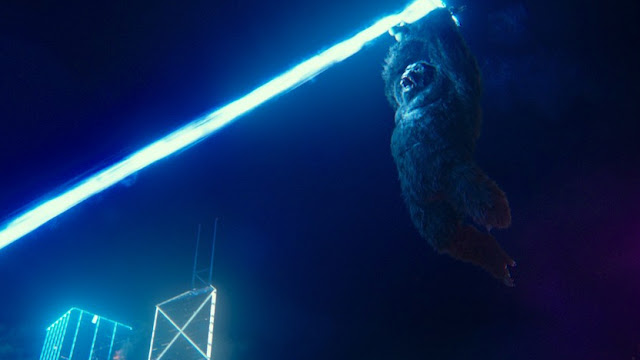 And the film just throws in more and more people. Millie Bobby Brown reprises her role from the previous film, only now she’s a teen conspiracy theorist with a soft spot for Godzilla. Julian Dennison plays her BFF and plot device. We get Eiza Gonzalez as the tough, hardnosed corporate woman with a job to do. It keeps going and going and getting nowhere. At least Skarsgård and Henry know the movie they’re in and enjoy themselves, fully diving into their wingnut personas, even if the consistency fluctuates. So much could easily be excised with little to no impact.

That’s the first half of Godzilla vs. Kong. The film continually piles dumb on top of boring on top of yawn. We get one solid action scene, but every last surrounding detail is so, so dull. Then, however, everything changes. I only talk so much shit about the first half because, especially in contrast, the second half is spectacular. 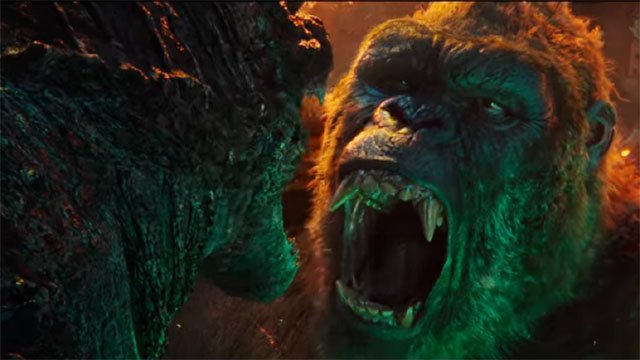 At almost the precise mid-point, Godzilla vs. Kong reaches a state I like to call Apex Stupidity, and it is a glorious place to be. There’s a moment where you feel the movie let go and release any lingering pretentions of seriousness or logic. This frees the filmmakers to indulge what this movie truly is and wants to be, and it unfurls into splendid heights of absurdity and utter chaos. It morphs into a B-grade Journey to the Center of the Earth riff, everyone involved cuts loose and wallows in the crazy, and it only escalates from there. The fights are bigger and badder, lit with a neon color palate lifted straight out of Tron, and at one point I definitely yelled, “Kiss!” at the screen. (No joke, with a swelling film noir-style score, in the moment I actually thought it might happen.) I was borderline hyperventilating with joy the final 20 minutes.

Not to be hyperbolic, but like I said, I hated the first half of Godzilla vs. Kong. Fortunately, the back half is one of the greatest things I’ve ever witnessed. This is where the film finds itself, the filmmakers allow the story to become what it truly needs to be in order to be successful, and they deliver exactly what a movie about Godzilla fighting King Kong needs to be. And much more. There are seriously things I can’t wait for you to discover in the back half of this movie. [Grade: B]