When coffee shop owner/aspiring musician Kato (Kazunari Tosa) heads to his upstairs apartment after close, he’s shocked to get a message on the TV. From himself. From two minutes in the future. This kicks off director Junta Yamaguchi’s Beyond the Infinite Two Minutes, a cascading series of sci-fi time travel antics with a crew of oddballs, like Megumi (Aki Asakura) and Ozawa (Yoshifumi Sakai), among others. They try to decipher the mystery, maybe get Kato a date, and quickly find themselves in way over their heads.

Easy comparison points include Primer and One Cut of the Dead. It’s a lo-fin indie time travel yarn that loops back and around on itself, growing more and more complex and tangled as it goes, spiraling further and further out of control. It’s also staged as a one-shot, full of elaborate choreography, intricate compositions, and labyrinthine construction. 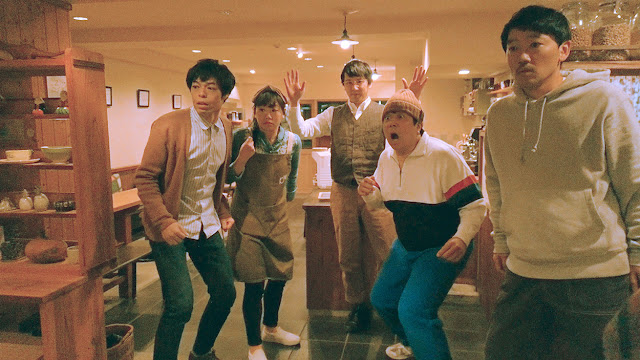 What we have is clever, even if it is at times in love with its own wit, and an impressive logistical feat. Seriously, the script supervisor responsible for keeping timelines, setups, and narrative through lines straight may be some sort of otherworldly being. A demigod at least. Coupled with the elegant camera work and direction, the team creates a film that’s inventive, energetic, and immersive. From the outset, you sit back and let it sweep you along for a captivating ride. It’s especially impressive the film looks so fantastic considering it was shot on an iPhone.

While comparisons are apt, Beyond the Infinite Two Minutes is certainly its own definite, distinct thing. It’s earnest and charming, sweet, and more than a little bit surreal. The characters are engaging and self-aware enough to be keen on time travel tropes, using this incredible find to goof and play tricks on their past and future selves. As things escalate, they go through typical stages in this sort of narrative; they try go suss out the rules and limitations, converse back and forth with themselves across time, attempt to use this tool for their own financial gain, and ultimately go too far, causing the situation to unravel. 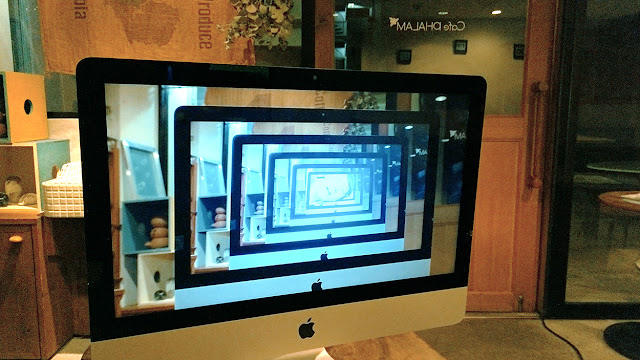 Beyond the Infinite began life as the brainchild of an acting workshop, similar to Sion Sono’s recent Red Post on Escher Street. Though the concept and execution are decidedly strong, it does spin its wheels and lose momentum in the middle. Bouncing between Kato’s TV in his room and one in the café, two minutes in the future, they play out similar scenarios over and over. They set up the dominos then rush to the other location to watch them fall. It’s fun and charming, but it takes the film a long time to find a direction. For long stretches, it’s little more than a cool formal exercise rather than a fully fleshed out story. Such moments of stagnation stand out even more in a movie that clocks in at 70 minutes.

But the hiccups are only mildly consequential for a movie that’s as enjoyable and affable as Beyond the Infinite Two Minutes. It’s quick, quirky, and inventive, and it’s hard not to think about the end of Galaxy Quest when the film considers the power and potential of even a short burst of time, like two minutes. [Grade: A-]