The big hook for The 355 is the insane cast. Director Simon Kinberg assembled an epic level of talent that includes Jessica Chastain, Lupita Nyong’o, Diane Kruger, Penelope Cruz, Bingbing Fan, Sebastian Stan, Edgar Ramirez, and Jason Flemyng, all chasing after a MacGuffin box in a globetrotting spy caper. And the result it wildly just okay.

The 355 isn’t a bad movie exactly, it’s merely bland, uninspired, and toothless in every way. Blunt and predictable at each step, this is paint-by-numbers espionage for babies. It’s full of famous people, exotic locations, the core cast has decent chemistry, there are big action scenes…and it all adds up to an empty, forgettable spectacle, the kind of thing you stumble across on cable one night, part way through, and you leave on while fold laundry or pay bills. It’s moderately engaging background noise. 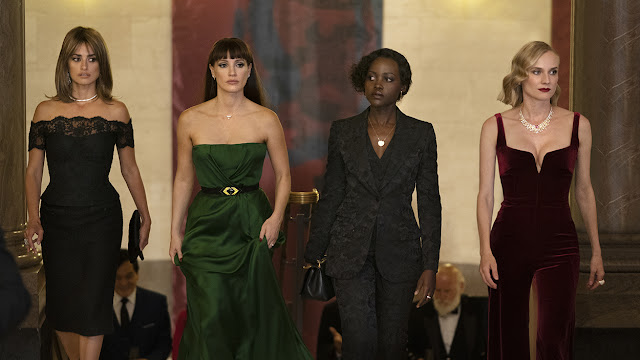 Chastain plays Mace, a CIA spook who puts her career above everything. Nyong’o is Khadijah, an MI-6 and tech wiz dragged back for one last mission. Then there’s Marie Schmidt (Kruger), the lone-wolf German wild card; Graciela (Cruz), a Colombian psychiatrist who works for her country’s intelligence agency but is basically a civilian; and Lin Mi Sheng (Fan), the Chinese one who shows up an hour into the movie. Betrayed and left out on their own, events throw them together to find a computer drive that’s basically a tech device capable of doing whatever the plot needs.

The script from Kinberg and Theresa Rebeck hits all the spy thriller genre markers. Double crosses happen precisely on schedule, the dead character turns out to be no-so-dead right on cue, the meek, timid one steps up exactly where necessary, and so on and so forth. If you get the sensation you’ve seen this movie many times before, you have. 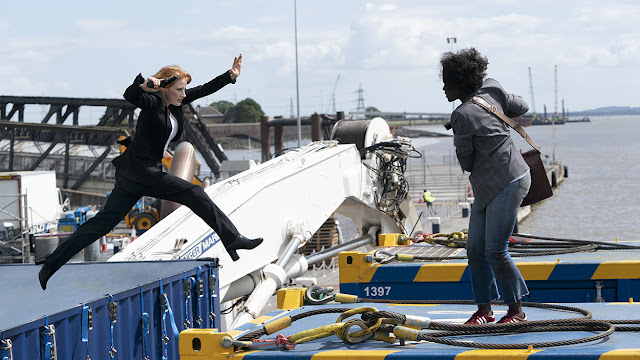 Questionable motivations abound—for a group of women who all claim to have deep trust issues, they all trust often, and at the drop of a hat. The script leans heavily on clunky dialogue to reveal backstory—Marie talks frequently about her double-agent daddy issues and at one point her boss tells her she’s “good at everything, except following orders,” in case you missed that she plays by her own rules. And of course, despite being on the run from every major international intelligence agency, they have no trouble travelling from country-to-country ASAP or getting their hands on any obscure gadget or gizmo that will help.

Like the rest of the movie, the action in The 355 is also fine. Better than some, it relies on a Bourne-style shaky-cam so ubiquitous in this type of spy movie, and though it does the job, it’s all incredibly familiar and falls into cliches. Like a foot chase where a person collides with a convenient motorcycle, knocks the rider off, and climbs on to vroom vroom away; or a character running along the top of a crane and jumping from shipping container to shipping container—though admittedly Mace does this in high-heeled boots, which is impressive. This is, of course, all that particular bloodless violence of a PG-13 movie, where they drop dozens and dozens of bodies with nary a speck of the red stuff. 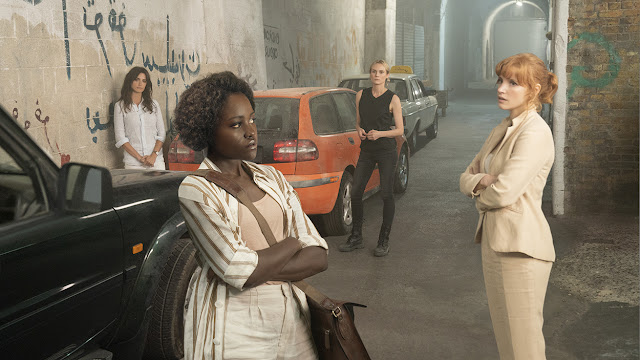 The cast does a solid job—how could they not—and keeps things watchable. However, the film is so plot focused, running from A to B to C to what’s next, that there’s little to them beyond he surface. We don’t spend enough time to get to know or care about them, so when they’re in peril, we’re never fully invested, and when the big emotional beats happen, they lack impact. Most of the movie coasts by on their inherent screen presence and charm, but beyond that, there’s nothing in the way of character or personality.

The best, and really only thing to say about The 355 is that it’s fine. Unremarkable in every way, outside of the cast, this has been done much better and been done much worse. It’s welcome to see a female-fronted spy story, but while a reasonable momentary distraction, that’s all this ever is, squandering a top-flight cast and potential to do anything interesting on an underdeveloped script and a middling espionage thriller. [Grade: C+]