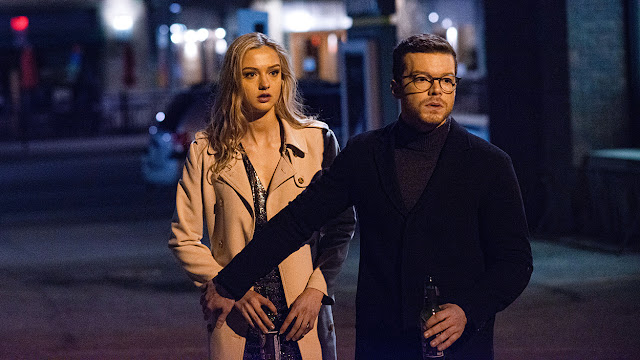 When reclusive tech millionaire Chris Decker (Cameron Monaghan, Gotham) goes shopping late one night he has a chance encounter with former model Sky (Lilly Krug) at the supermarket. At least he thinks it’s chance encounter. Chris and Sky fall into a hot, passionate love affair, and you know what they say about things that look too good to be true. So begins Shattered, the latest film from director Luis Prieto (Kidnap) and writer David Loughery (Lakeview Terrace, Passenger 57). 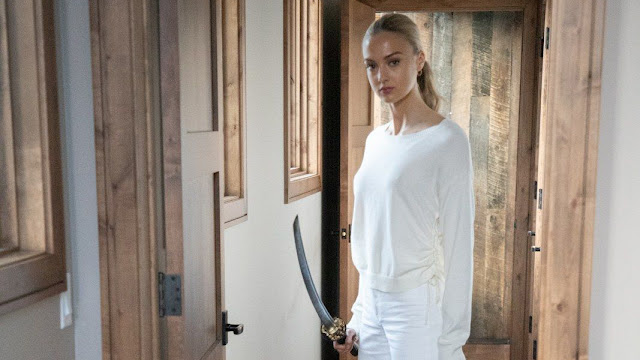 With nothing but clunky dialogue to deliver, the two milquetoast leads have zero spark or heat. Attempts to be suggestive and alluring faceplant into the pavement with every lackluster love scene. They don’t even miss enough to be interesting, they are, like every other facet of this movie, simply drab and perfunctory. Leaning into the tech element, with Chris’ futuristic high-security mansion-on-the-hill, already plays dated and has been done many times much more effectively. And despite the script trying to give Sky a damaged background and motivation—it also hinges on a rote, all-foster-kids-turn-out-to-be-monsters trope—she implements her plans for the single least interesting reason the script could have chosen.

The only one who really understands the assignment is John Malkovich. He plays Ronald, Sky’s nosey, pervy landlord and neighbor. Clad in a mid-1980s mom-windbreaker, he snoops and peeks and espouses 5G conspiracy theories as he runs a road-side motel. He’s weird and unhinged and anchors an underdeveloped side-plot that’s supposed to drive home Sky’s cold, manipulative nature. He’s a hoot, but here and gone far too quickly. Oh Ronald, we hardly knew ye. 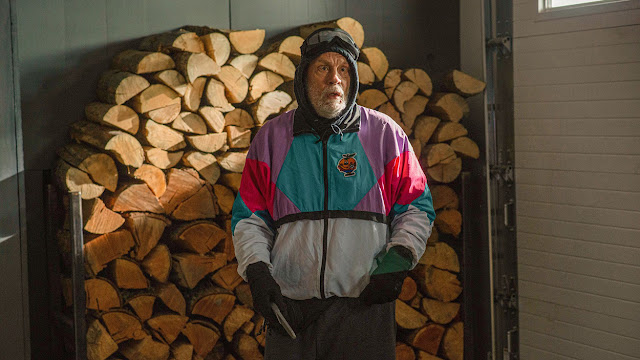 I do love that Frank Grillo can just show up on set for a few days and get paid. But damn, it also makes it hard to look at a movie, see Grillo is in it, and decide if that’s enough to warrant a watch. Is he actually a key player and invested, or does he show up for a few disinterested minutes, collect a pay check, and walk? (To a lesser degree, he’s doing the modern-era Bruce Willis thing a lot of the time.) Shattered is definitely the latter. Grillo has a damn fine time chewing the scenery—he also knows what movie this should be—but he pops in at the 58-minute mark, has two or three scenes and a role that could have been played by anyone, and then goes on about his merry way. He’s a quick, bright ray of what-could-have-been in an otherwise gray, desolate sky. 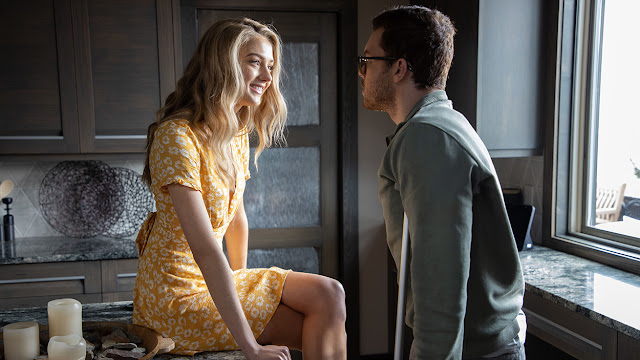 *There is one final thing I want to talk about. Big, big, big big spoilers from here on out. Like, I’m going to talk about the very end of the movie. You’ve been warned.

After making the least interesting choice at every juncture for 90 minutes, Shattered makes one at the end that almost, almost redeems the whole thing. In the climax, as Sky, Chris, and Chris’ estranged wife Jamie (Sasha Luss, Anna) wrestle around and fight for survival, I thought to myself, “Wouldn’t it be awesome if the daughter shows up right now and shoots the big bad?” AND THEN SHE DOES! Just as Sky is about to dispatch Chris and Jamie, their daughter Willow (Ridley Asha Bateman), all of maybe eight-years-old, blasts her from behind with a discarded handgun. No joke, I stood up and cheered. It’s majestic, and if only the rest of the movie had been so inspired.