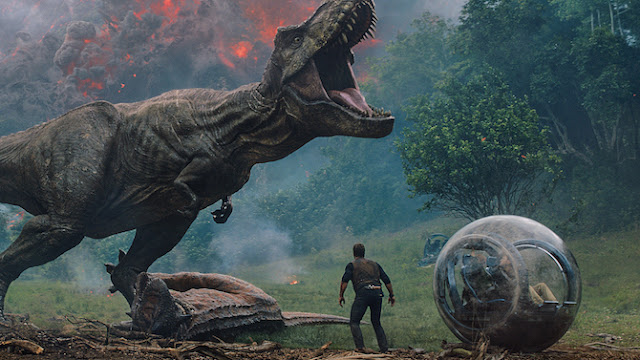 Jurassic World: Fallen Kingdom—or as I like to think of it, Jurassic Park 4: Part 2—is a bizarre proposition. A mess of rampaging dinosaurs, too-convenient storytelling, and an utter absence of emotional stakes, the film offers a few entertaining moments. But overflowing with sheer nonsense, insufferable characters, and a shocking lack of thrills, it’s insanely boring for long, long stretches, something a movie ostensibly about dinosaurs eating people should absolutely not be. I can forgive almost anything in the pursuit of watching giant prehistoric reptiles chow down on flat, terrified characters, but I sure as hell can’t cotton to dull and drab.

After the complete and total failure of yet another dino-centric theme park in Jurassic World, Fallen Kingdom picks up in a world asking, “Since we have dinosaurs again, what do with do with them now?” Circumstances further exacerbate the situation as a volcano erupts on Isla Nublar, the location of the park now infested with loose dinos, threatening their very existence once again. 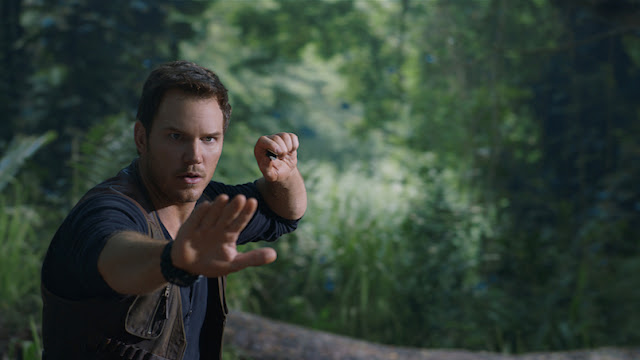 The first portion focuses on this aspect of the story and is as much fun as the movie ever becomes. Back for more, former Jurassic-World-honcho-turned-dinosaur-rights-activist Claire (Bryce Dallas Howard) and former velociraptor wrangler Owen (Chris Pratt)—with Zia (Daniella Pineda), a “paleo-veterinarian,” and Franklin (Justice Smith), an obnoxious, wholly unnecessary IT guy, in tow—return to save the big lizards from re-extinction. Here audiences get dinosaurs, explosions, characters running from things that aren’t really there, and all the goofy joys that drive these movies. It never lives up to previous incarnations, but it’s modestly enjoyable for a while.

Once they leave the island, however, Fallen Kingdom becomes a shitty, tedious tale of industrial espionage and betrayal that’s not even as fun as that sounds. It’s also exceptionally short on dinosaur action, despite the fact the plot takes great pains to shoehorn in yet another bad-idea, created-in-a-lab, genetic hybrid dino killing machine—because that worked out so well last time. Here, Eli Mills (Rafe Spall) runs a foundation for Benjamin Lockwood (James Cromwell), the dying billionaire industrialist who co-founded the original Jurassic Park. There is, of course, intrigue and deception. And a precocious little moppet, Maisie (Isabella Sermon), who gives Franklin a run for his money when it comes to being both unnecessary and annoying as hell. 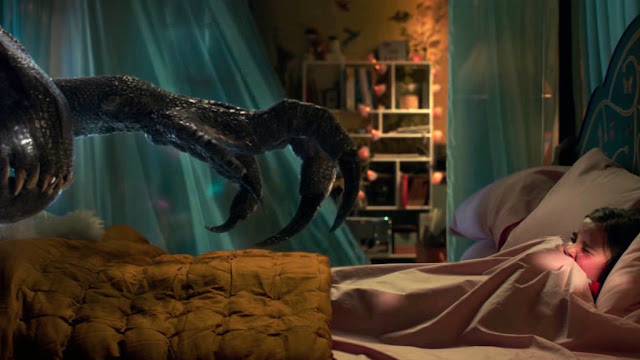 Directed by J.A. Bayona (A Monster Calls) and shot by Oscar Faura (The Imitation Game), Fallen Kingdom lacks any sense of grandeur or wonder. The script gives the actors nothing to do except run and scream. Even Pratt, whose smart-ass charm can carry him through just about anything, only has a few not particularly funny or clever quips. He’s wasted, and Howard pretty much just takes up space like everyone else.

Running from dinosaurs and lava—also, I don’t think the production has any clue how hot molten lava actually is—Franklin continually screams, “Why am I here?” Which leaves the audience to ask the same question. Not only does he suck as a character and have two defining characteristics—he’s scared and a nerd— he adds nothing to the plot. At least the script takes steps to make Zia more than just a damsel in distress, though she serves little more narrative function than Franklin. Also, she was originally intended to be explicitly gay, but according to reports that thread was excised because Hollywood apparently still can’t have an openly gay character. 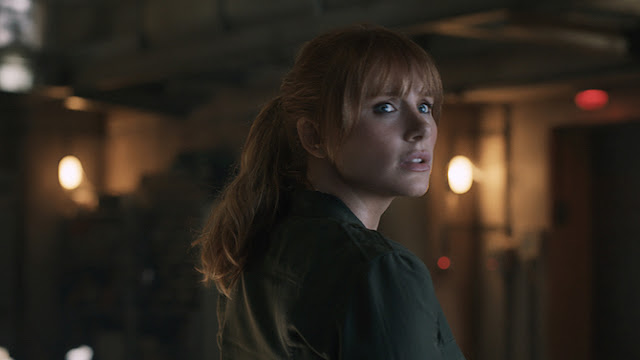 As unnecessary as the others are, Maisie somehow brings even less to the table. It’s like there was a studio mandate the film had to include a kid, but the script has no idea what to do with her outside of a pointless, telegraphed twist. It wants desperately to bring up moral and ethical questions associated with genetic tampering and playing god, only it refuses to do any of the work to get there. (It similarly never actually deals with the idea of weaponizing dinosaurs beyond, "it's bad.")

I hate to call a script lazy, that always feels like a cop out (and lazy in itself), but Colin Trevorrow and Derek Connolly’s writing doesn’t do Fallen Kingdom any favors. This is a bad script—I’m starting to think Safety Not Guaranteed was an anomaly. Not only are the characters bland and uninteresting, there’s no narrative force behind the plot. Events happen because they’re convenient and need to happen, not because there’s any actual reason or as a result any decisions. The protagonists are entirely passive, only reacting to the events around them rather than taking any agency on their own. 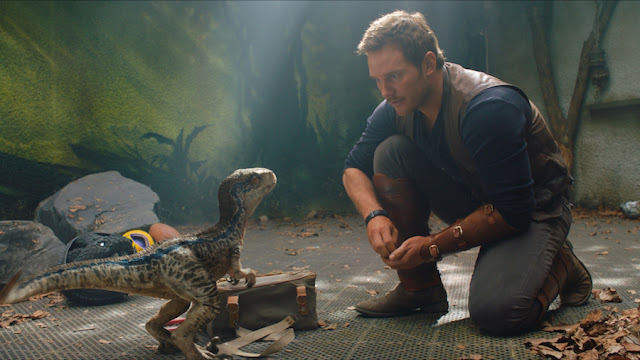 In the end, Fallen Kingdom leaves viewers with gaping questions. Things like: how, after being left for dead and jumping a massive cargo truck onto a departing ship at the very last second, no one noticed a bunch of strangers running around on board for the duration of the trip? Similar questions abound. Continuity errors and cavernous plot holes pepper the film; it offers toothless, watered-down PG-13 violence that’s comical in its bloodlessness; and an ultra-nihilistic, surprisingly cynical conclusion caps off a movie that feels like nothing more than a preamble to the inevitable next chapter. If you want to watch dinosaurs on the loose, watch until the action leaves the island, then do yourself a favor and evacuate.

I don’t even care that Jurassic World: Fallen Kingdom is dumb, and it is exceptionally stupid. The concept is patently ridiculous, and I saw the last one, so I expected that much. But there’s no excuse for a movie with dinosaurs to be so painfully dull and dreary. [Grade: D+/C-]

Posted by Brent McKnight at 2:41 PM