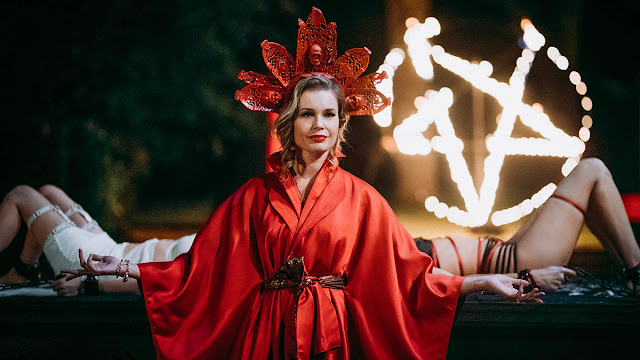 “Death to the weak, wealth to the strong.” Poverty is cyclical, a vicious circle from which it’s almost impossible to escape. The rich exploit the poor to stay rich and accumulate more, feeding on the lower class, using them as tools to amass more and more. This feeding usually happens in a metaphorical sense. In Chelsea Stardust’s Satanic Panic, we’re talking literal class warfare and consumption, graphic horror style.

Class strife casts an omnipresent shadow and drives this campy, gore-saturated throwback. Broke and trapped and desperate, Sam Craft (Hayley Griffith) takes a job delivering pizzas, a job well-known for being dependent on tips. When she scores a big delivery in a posh section of town, instead of the fat payday she hopes for, she stumbles into what first appears to be some sort of corporate pyramid scheme. In reality, however, it turns out to be a satanic ritual. 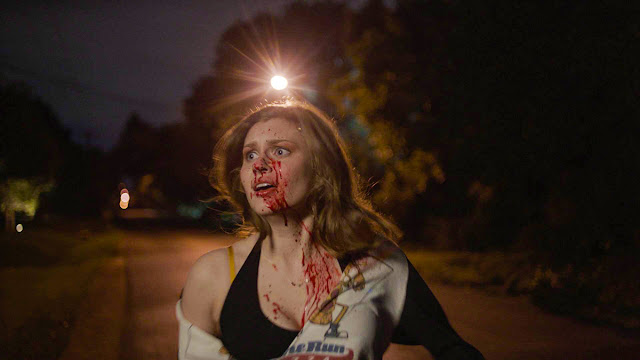 See, the rich are rich because of, well, Satan and his influence. While people can talk all day about the immorality of the super wealthy, resource hoarding, and the like, Satanic Panic gives it a genre makeover. Danica Ross (Rebecca Romijn) runs her coven like a CEO trying to build team moral and increase productivity, but instead of simply exploiting the lower classes for their labor, they co-opt Sam and her virgin body for a hellish ritual.

Overall, the film is an up and down affair, but what works, works well. Though you have to wade through a clunky beginning and set up, once the plot kicks into gear, things get all kinds of gooey and nuts. We’re talking weird, goofy practical creatures, gore-soaked Satanic mayhem, intestines being pulled through mouths, demons sheets, child punching, adorable family murder portraits, and so much more. 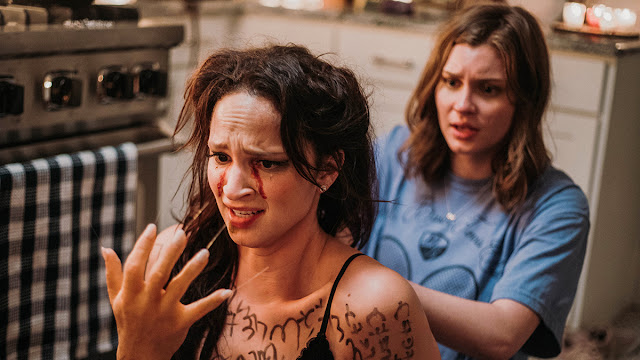 And it’s not just blood spatter and Satan…okay, it’s mostly blood spatter and Satan, but not exclusively. Stardust and writers Ted Geoghegan and Grady Hendrix sprinkle in clever bits of world building. They take pains to establish the rules of the dark game and include details that give this upper crust world a lived-in authenticity—this is just their reality, almost mundane. Of course it’s ridiculous and over the top, but at the same time, it’s well thought out and intricately rendered. For all the campy, sticky, heightened hilarity, legitimately scary and harrowing moments also punctuate the film.

The cast is, for the most part, fine, though a couple of side characters are cringe-worthy and unnecessary. Griffith delivers a solid rendition of a young, earnest woman in peril, but isn’t generally asked to do much more than that. Ruby Modine turns up as the daughter of one of the rich families and the previous virgin sacrifice, before she fucked it all up—literally as well as figuratively in an act of rich kid rebellion. She runs the gamut from bored-with-it-all to scared-as-hell. It’s really Romijn who’s the most fun, however. As the queen bee, she’s part motivational speaker, part biting, vicious socialite, part minion of the Devil. And she has a damn good time in every role.

[Related Reading: Timo Tjahjanto Will Direct a 'May the Devil Take You' Sequel] 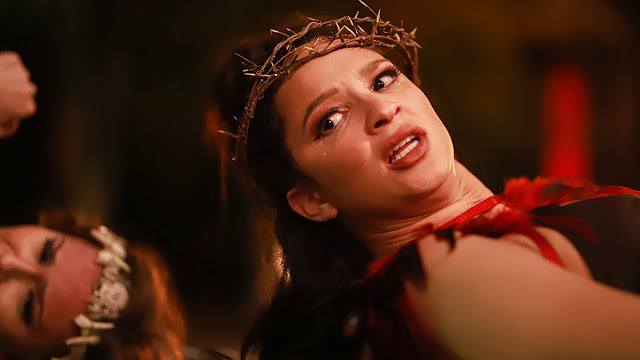 Once it gets moving, there are times the momentum in Satanic Panic absolutely soars. When it’s firing, it’s quick and sharp and fun. But there are also many spots where the tempo falters. Annoying minor players take up too much on screen real estate with little or no payoff—no one cares about the fate of Sam’s skeevy coworker. The same goes for inner-coven beef and power struggles that draw focus away from the main narrative and characters. A couple quippy lines can’t justify the attention. And the less said about “The code of the Sams,” the better.

Despite a few rough patches and superfluous asides, Satanic Panic is an up tempo blast. This slice of bloody exploitation horror seems tailor made for a late-night, alcohol-lubed audience to devour and adore. [Grade: B-]