Does M. Night Shyamalan’s new movie Old work? That’s going to be a matter of some debate and the answer promises to vary viewer to viewer. One thing that is clear, however, is that, for good or ill, this is a big swing that mixes psychological thriller elements, hellish body horror, and arch family melodrama. All within a framework that plays like an extended Twilight Zone episode, wrapped in the director’s magnificent formal touch. It’s wild and all over the place, messy at times, but also ambitious as hell and compelling end to end.

Based on the Swiss graphic novel Sandcastle, Old follows a family—Guy (Gael Garcia Bernal), Prisca (Vicky Krieps), and their kids Maddox and Trent, played by Thomasin McKenzie and Alex Wolff for the bulk of the film—on a tropical vacation. On the surface, everything appears perfect, both the family and the trip. But of course, things are not always as they seem, in either regard. Secrets threaten to burn away the relationship, and there’s something not quite right about this exclusive, semi-secretive resort. And then the family takes an excursion to a secluded beach where they discover they’re aging at an accelerated clip, seemingly with no escape. Before long, the young kids aren’t so young anymore. 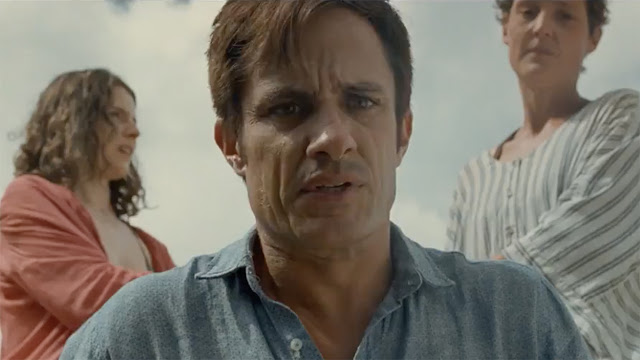 At this stage of his career, Shyamalan is well known as the “twist” guy, despite only a handful of his films ending that way. Still, the reputation persists. With Old, he really plays with this, luxuriating in the details, baiting those in the audience trying to piece together the puzzle. The film practically looks at the audience and asks, “Do you think that might be a clue about what’s really going on?” and winks. For all the tension and escalating pressure, this gives the film a playful element; Shyamalan knows what you’re doing and wants you to know he knows, even as he builds the mystery you’re trying to unravel.

Old exists in a type of arch, heightened reality. Characters play like weird caricatures, dialogue is knowing and mischievous, but also stilted, often unnatural by a degree or two, overly expository, and repetitive. Every element is designed to unsettle and create an underlying, though not too deep, sense of strangeness and dread that engulfs this small group of strangers on their “secret” beach as they figure out what connects them and what forces brought them here. 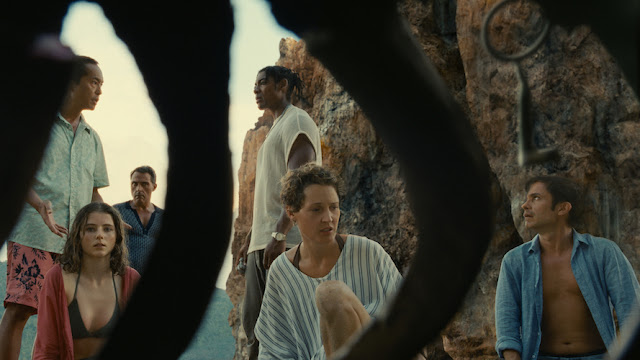 This self-aware impishness extends to the visual side. Shyamalan has always been a gifted stylist, and that is no different. He shoots the hell out of this beach and the stunning natural surroundings, using tight but elaborate staging to accentuate the mounting fear and stress. But he also uses the camera to willfully obfuscate and delay narrative revelations. Instead of showing what a rapidly aging child looks like, he places the camera so the image only shows a parent’s reaction to a sudden burst of aging, letting it play out much longer than necessary, ratcheting up the unknown and the sense of horror and uncertainty. Again, this plays like he’s winking at the audience.

And in on the scheme is a stacked cast, basking in the exaggerated tone. Krieps and Garcia Bernal capture a raw parental fear of seeing their children in danger and not being able to do anything about it. On the beach they’re joined by Charles (Rufus Sewell) and Chrystal (Abbey Lee), Jarin (Ken Leung) and Patricia (Nikki Amuka-Bird), and the amazingly named rapper Mid-Sized Sedan (Aaron Pierre). Each has their own secrets, their own foibles, and their own unique response to this insane situation. 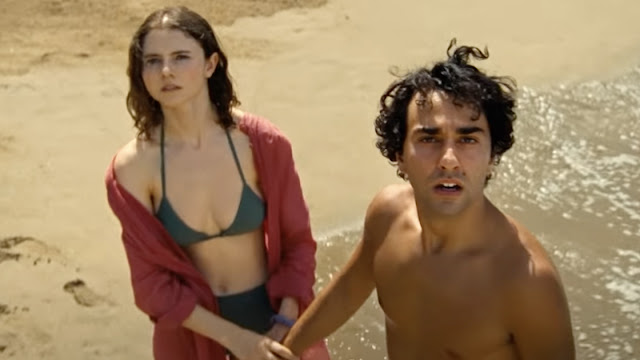 The younger actors, however, are the standouts, and Old features a talented trio. McKenzie and Wolff, along with Eliza Scanlen as another all-of-a-sudden teen, maintain their childlike naivete accompanied by the terror of going through rapid changes they don’t have the tools to cope with. At times, the consistency of their personalities waver. They go from kids to adults, physically, in the span of a few hours, but it’s not always clear how film intends them to progress mentally. At times they’re supposed to come across as children in grown-up bodies, while others they seem to have matured psychologically as well, though that varies scene to scene. This has more to do with the script, which Shyamalan adapted himself, than the performances.

So, does it work? Does Old all come together in the end? Opinions are going to differ, drastically in some cases. There are a lot of jagged bits and places to hang up where maybe things don’t quite line up, though the ambition is undeniable. If nothing else, it’s unlike anything out there. It’s best to let the movie take you, to soak in it as an experience rather than dissect every frame and line. Down that path lies madness. There are also a few sags in the momentum in the middle, though it remains an compelling, if curious and occasionally difficult throughout. Underneath all the thriller trappings and obvious narrative machinations lies a meditation on grabbing onto what really matters in life, finding joy in the present and not wasting a moment, and time coming for us all. [Grade: B]