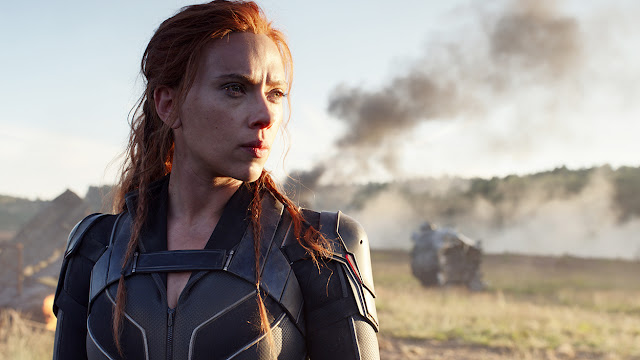 Ever wonder what Marvel Cinematic Universe staple Black Widow, aka Natasha Romanoff (Scarlett Johansson), was up to betwixt the Wars Civil and Infinity? (And, you know, before the fate that ultimately befalls her in Avengers: Endgame?) As it turns out, she went on a wacky family vacation. Sort of. Sort of as in sort of wacky and sort of as in sort of family. Such is the tale told by her long-awaited first solo venture, Black Widow.

The plot revolves around Natasha contending with her past. This involves not only her time as an Avenger, but chiefly her life before that, as a Russian assassin. All of which throws her into direct contact with people from earlier missions, including Yelena Belova (Florence Pugh),  Alexi Shostakov (David Harbour), and Melina Vostokoff (Rachel Weisz), who form an uneasy pseudo-family unit who confront a ghost from their collective past and right a previous, and continuing wrong. While there’s plenty of large-scale action, it’s this dynamic, tense and strained, and occasionally sweet, that forms the core of the story and drives the film. 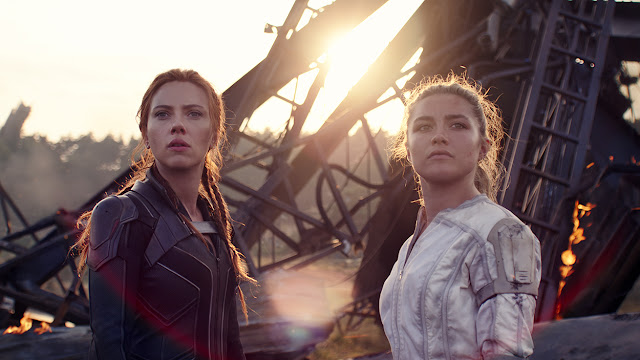 The 24th entrance into the MCU proper, fans have waited for Black Widow since the character first showed up in Iron Man 2. And in all honesty, though this marks her eighth appearance, it feels much more akin to the more standalone Phase One films, like Iron Man, Thor, and Captain America. Set between the events of Captain America: Civil War and Avengers: Infinity War, it deals with Natasha’s life under the radar following the enactment of the Sokovia Accords, which outlawed independent superheroes.

Though obviously connected to the larger MCU tapestry, it also stands much more on its own than many of the other films. By and large, it focuses on this single story instead of furthering the larger looming narrative. Because she’s on the run, Natasha can’t call her super friends, who are either also in hiding or on the other side of this particular rift. The resulting film plays more like an individual, one-off adventure rather than another building block in continuing story leading to the next big team up. So many of the other Marvel films hinge on what came before and an intimate knowledge of the surrounding mythology. This, more than others, you can watch without an encyclopedic knowledge and not miss much. Sure, the details are there for the interested, but they aren’t as integral to the plot as in some instances. The previous two-dozen movies aren’t necessarily required reading. 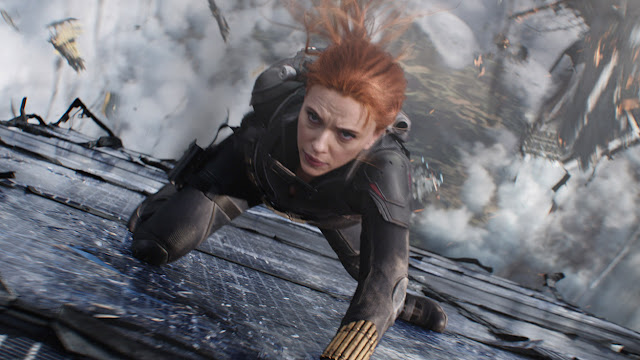 In the hands of director Cate Shortland, the first woman to helm an MCU movie solo (Lexi Alexander directed Punisher: War Zone, but that’s not part of this continuity, and Anna Boden co-directed Captain Marvel) Black Widow watches like Marvel’s attempt to make a Bourne movie. Because, with one exception, we’re dealing with people who don’t have superpowers, enhanced abilities, or fancy-pants nanotech suits with artificial intelligene, the action is, by necessity, of a different stripe from the studio’s typical fare.

Don’t get twisted, there’s still plenty of big-budget spectacle on display, and the traditional Marvel third-act set piece comes straight from their playbook. But for most of the film, we see a more personal level of action, hand-to-hand combat and car chases rather than sprawling battles full of guys in suits zipping around like CGI gnats. You can’t exactly call the action gritty, but by the standards of the comic book giant, this is a Marvel-fied attempt at down and dirty fisticuffs. 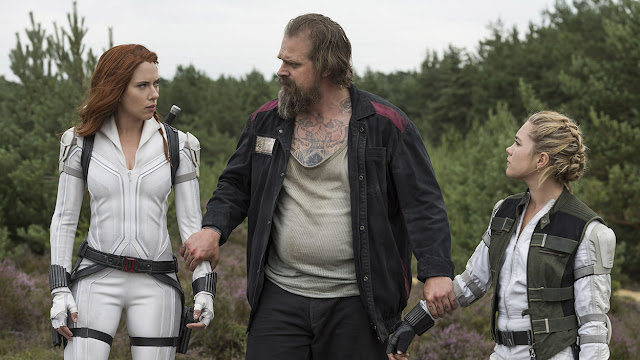 Black Widow also stands apart due to the film’s stakes. Line and death hang in the balance, but at least in terms of a global, fate-of-the-entire-planet sense, there’s much more on the line. We’re talking personal, emotional stakes. The survival of half the population of Earth doesn’t depend on our heroes, but they land with much more impact because of the intimacy, because of what they mean to the people involved. The film is much better for this choice.

By this point, we generally know what we’re going to get out of both Natasha Romanoff and Scarlett Johansson. Though there’s much more of that on display here. We’ve seen strong emotional beats from her in The Avengers and in her relationships, particularly with Clint Barton and Bruce Banner, but now she takes the spotlight. While Johansson gives a good performance, the newcomers, two  in particular (Pugh and Harbour), are the true highlights of Black Widow. 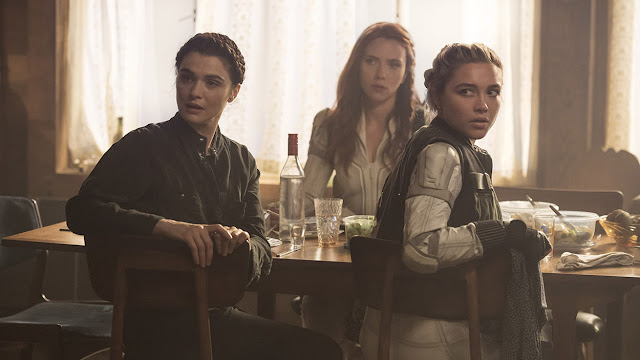 Though she’s a great actor, Rachel Weisz doesn’t get a ton to do here and is sadly underused. Melina’s arc is the least fleshed out, and her presence fades next to the other new additions. David Harbour plays Alexi, also known as the Red Guardian, as a boisterous braggart Russian counterpart to Captain America, though his bravado, as it so often does, masks an underlying sadness and insecurity. He’s funny and heartbreaking, both over the top goofy and tragic. It’s also fun to watch Ray Winstone grumble and growl his way through a Russian accent as Dreykov, the film’s big bad, but that’s about all there is to see.

It’s Florence Pugh, however, who steals the entire show and is an utterly fantastic addition to the canon. Yelena’s sardonic and sarcastic, deadpan and resigned—she has a running bit in perilous situations where she flatly remarks, “This would be a cool way to die,” or “This would be a less cool way to die.” She also uses her humor to deflect and distract from her deep pain and damage. Guarded as she is, her sense of betrayal and hurt rings much more raw and real than her counterparts. Pugh and Johansson turn strong chemistry into a fraught sisterly bond, loving and competitive, earnest but full of playful banter and ribbing. Yelena already has more appearances lined up and looks to be a great new player on the scene. 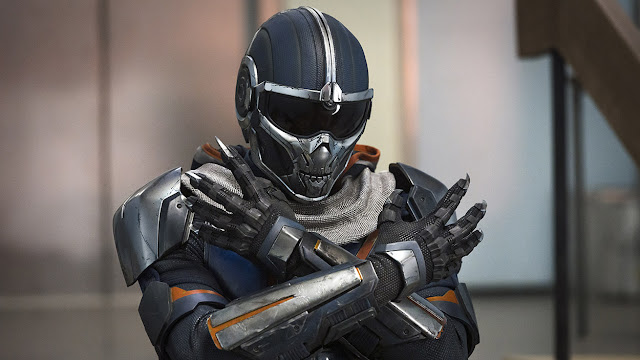 The pace too often bogs down in the exposition and a few leaps leave lingering plot questions unanswered. Typical to many Marvel movies, it leaves the definite sensation of a lot of opinions in the mix, each with a different agenda. Nowhere is this more apparent than the film attempting to shoehorn in Taskmaster, a villain in a generic suit of armor with a shadowy past and vaguely explained ability to mimic any fighting style. Eric Pearson’s script sets the character up as a shiny new menace and attempts to give the character resonance. But ultimately, it plays like a generic comic book baddie and never leaves any lasting impression. If you cut the character out, the movie loses nothing.

While entertaining and engaging overall, Black Widow does feel a little too little, too late, like it should have come out around the first Avengers team up. Especially knowing what we know about the character’s fate and Johansson’s future in the MCU. At times, the most evocative themes—coping with a difficult past, mending broken familial relationships, atoning for misdeeds—get lost in the standard superhero bombast. Though when the film places them front and center is when it’s strongest. Still, it’s a strong-enough final ride for Black Widow and Johansson, one with a well-earned emotional core and a fantastic supporting performance from Florence Pugh. (And you can tell a woman was a key creative force because Natasha, and Yelena, wear much more practical pants and shoes than in other adventures.) [Grade: B]

Posted by Brent McKnight at 1:23 PM