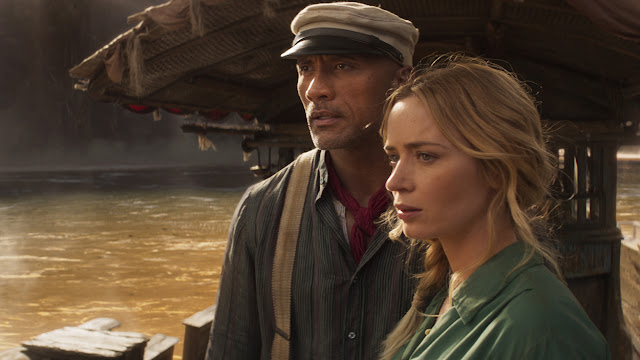 One thing I did not expect was for Disney’s Jungle Cruise, their latest cinematic adaptation of one of a classic theme park rides, to begin with an orchestral arrangement of a Metallica song. But here were are, and that’s as edgy as this movie ever gets.

That’s not to say Jungle Cruise isn’t entirely without charms. But by and large, as entertaining as it can be, this skates by on the charisma of its two leads, Dwayne Johnson and Emily Blunt, which is considerable, but only goes so far. It also riffs on adventure films that came before, squeezing that nostalgic twinge for all its worth. Chief among those referenced are the likes of The Mummy (1999) and Raiders of the Lost Ark, and their ilk. Director Jaume Collet-Serra (Run All Night) and Disney also run the Pirates of the Caribbeanplaybook almost beat for beat, with diminishing returns. 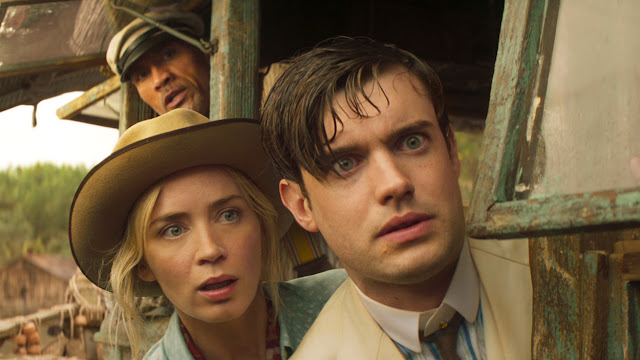 Jungle Cruise actually kicks off on a high note. It may be a pale copy of the films that inspired it, but it does capture the energy and high adventure that makes those so much fun. Set during World War I, Blunt plays Lily Houghton, an high-society lady who wants none of the expected social nonsense expected from women of her era or station. Along with her fussy, reluctant tag-along brother, MacGregor (Jack Whitehall), she sets off on a quest to find the Tears of the Moon, a mythical plant that can cure any illness. This legend has driven generations deep into the Amazon. Through a series of shenanigans, she hires Frank Wolff, a pun-spouting roustabout tour guide to get her to her destination, and pursued by the diabolical Prince Joachim (Jesse Plemons), they set off into the most-Disney-fied journey into the heart of darkness imaginable.

As all of this gets going, the film bounces along at brisk pace, from one misadventure to the next. Fearless and entitled like only a rich white lady can be, Lily barrels her way through stuffy male adventure clubs, seedy dive bars, and remote villages, with a complete disregard for anyone else or any culture she encounters. For his part, Johnson does what he does best, quip and wise crack and wink his way from scene to scene. He’s basically the human embodiment of a cartoon smiling and there’s a little glint off his teeth. That’s as deep as anyone ever gets, but there’s a nice surface sheen. 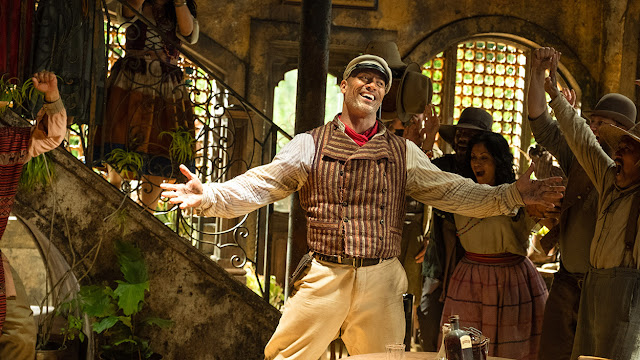 While fun, eventually this becomes relentless fun, which becomes exhausting. Jungle Cruise is like going out with a friend who won’t let you have a moment to breathe, always pushing fun, fun, fun, and all that fun gets way less fun in short order. And when that happens, things get tedious, especially as the film settles into a bloated, exposition-laden middle period. There’s always Blunt and Johnson and their various enchantments to keep things from completely dying, but for a movie build on excitement,  long stretches aren’t particularly exciting. Though if nothing else, Frank has a drunk poorly CGI’d jaguar sidekick, so that’s neat.

Even when it the pace picks back up near the climax, it never regains the heart and humor and giddiness of the early goings. It doesn’t help matters that devolves into a forced love story and a muddy digital battle between computer generated villains and pixelated versions of our heroes running and leaping through equally awkward greenscreen backgrounds. Collet-Serra is most known for helming grounded, mid-budget thrillers and horror films like Unknown, The Commuter, and Orphan. He stages the action well enough, but the scope feels like it got away from him. (Next up he’s directing DC’s Shazam spinoff, Black Adam, also starring Johnson.) 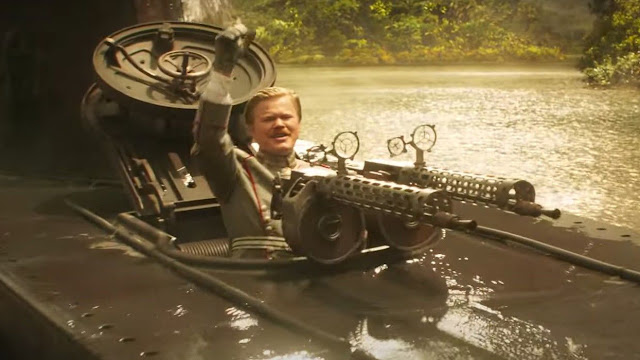 The cast carries Jungle Cruise and everything the film has going for it falls to them. Blunt relishes in charging full speed ahead, daring to, gasp, wear pants. And though Johnson makes zero effort to be anything but himself, he’s as magnetic and watchable as ever. If he had more screen time, Jesse Plemons would walk away with this movie hands down. He has to be channeling Werner Herzog, droll and wry and having just the best damn time. Unfortunately, however, the movie benches him for most of the middle portion of the movie, and most of the climax, for that matter. How are you going to sideline a scene-chewing German prince with a U-boat?!? Whitehall plays the fastidious, affected brother role well enough, even if he often feels like John Hamm cut scenes from The Mummy.

Jungle Cruise is exactly the movie it looks like, for good and ill. On a surface level, it hits all the markers. James Newton Howard’s score soars as the pair of charming leads bound their way through a sequence of perilous, if never exactly thrilling scenes. It’s big blockbuster level action that desperately wants to be epic—all the markers scream as much, even as they fall well short of that. At best, it’s passably entertaining, though never more than an adequate facsimile of better movies; at worst, a vapid shrug. [Grade: C]