'Dazed And Confused': It'll Never Be This Good Again 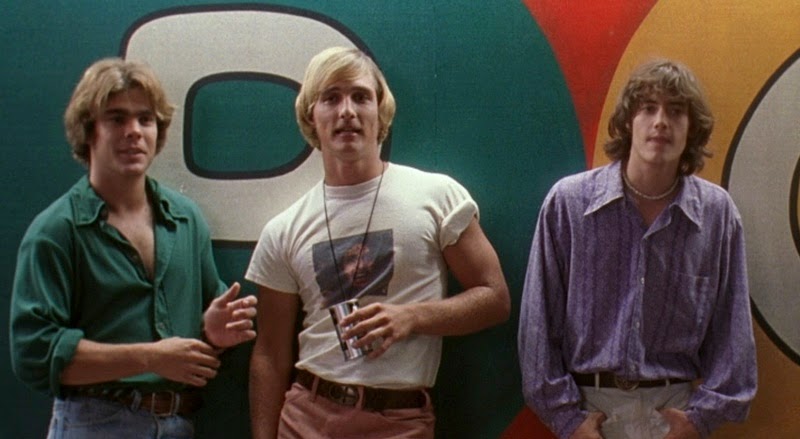 Like many of you, my introduction to Richard Linklater came in high school with his first feature, Slacker, which, to this day, is one of the first images that pops into my mind when I hear the phrase “independent film.” Made on the cheap, using non-professional actors, and told in an unusually structured, seemingly plotless way, it’s the kind of movie that, especially at the time, when the new wave of American independent cinema was quietly building steam on the down low, a 15- or 16-year-old kid might spend weekends getting high on a couch in a buddy’s basement and watching, dissecting the philosophical ramifications of each individual segment, as well as the movie as a whole. Linklater’s follow-up feature, Dazed and Confused, served a similar purpose, though in a very different way.

Whereas Slacker is, in many respects, the quintessential early indie movie, Dazed and Confused is more of a mainstream translation of many of the themes and ideas explored in the previous film, putting them on display in a publicly accessible manner. I saw this in the theater, which, in my hometown, a small Navy outpost in the Pacific Northwest, is somewhere you never would have found a screening of anything like Slacker. At the time, I didn’t even know it was the same director, and to be honest, I was still forming my idea of what that meant and means, and these two films helped drive that home.

Once I realized the authorial connection and learned the same filmmaker was responsible for both films, I rewatched them—granted, this has been more than 20 years at this point—and the similarities became more and more pronounced. Dazed is obviously the more approachable of the two—we’ve all been through a last day of school, moved on to new, terrifying futures we only vaguely understand, and attempted to figure out exactly where we fit in our worlds—but they share obvious strands of DNA.

It moves with a similar fluidity to Slacker. The scope of Dazed is less sprawling and more reined in, featuring a limited, closed-off world that keeps circling back on itself, but that episodic nature that is key to both is still in play. Over the course of one night—the traditional cinematic one-night-that-changes-everything—you check in with various groups and sets as they progress through the evening, interpreting their experiences, internalizing them, and being changed in the process.

The parallels between the two films are never more apparent than in the early going of Dazed, when the kids are still at school, killing the last hours of the year when we all know that nothing, at least in the spectrum of traditional education, is being learned. There’s a whole wealth of knowledge changing hands, but ain’t none of it written down in any textbook you’ve ever encountered.

Scenes from this stage of the film could practically be lifted from Slacker, or at least be chaotic rants left on the cutting room floor, as you flow seamlessly from one group to the next. You have youthful philosophical observations like the “old age suppressing youth thing,” an interesting take on gender dynamics with the women’s bathroom Gilligan’s Island discussion (even if the Professor is sexy), and the obviously bra-burning feminist teacher telling her students that as they partake in all the bicentennial festivities what they’re really celebrating is a bunch of “slave-owning, aristocratic white men didn’t want to pay their taxes.”

Though at first glance they’re drastically different movies, there is simultaneously an apparent progression from one film to the next. Slacker is very much a movie about a concept, one that has, from the beginning, a clear conceit that is readily apparent on the surface. You can’t escape it. Dazed and Confused undertakes a similar endeavor, showing a variety of vantage points on a number of issues, philosophical, political and otherwise.

While Slacker throws these scenarios at you, one after another, beginning to end, often in rapid-fire succession, Dazed lingers, offering multiple perspectives, and allowing you to take your time and consider all sides of these various excursions.

Ultimately, these digressions circle back on one another, and Linklater forms them into a coherent narrative that resembles an updated American Graffiti for a new generation. Much as George Lucas’ film, released in 1973, is set in an idealized earlier time, so is Linklater’s (released in 1993, set in 1976).

As the day begins, there is a very rose-tinted-glasses style outlook on the whole scene, one that is, layer by layer, peeled away over the course of the ensuing evening. For all the seeming importance placed on things like playing football, chasing romantic partners, and finding some good old-fashioned visceral experiences, there isn’t much in the way of consequences. You may get your ass kicked a little bit, but there isn’t a lot at stake. Whatever happens, you’ll be fine. And that includes Carl’s mom pulling a shotgun on Ben Affleck.

It feels like every last moment means everything sometimes—and indeed, at the time, it does—and Linklater looks back with the knowledge that this is both the most and least important night in the life of all of the characters involved. Sure, things will be totally different tomorrow, but at the same time, things will be exactly as they were yesterday, and the day before, and the day before.
This is never more apparent than as Dazed and Confused draws to a close and the film takes a dark turn towards what can only be described as adulthood. Mike (Adam Goldberg) gets into a fight at the beer bust, Pink (Jason London) and the others get busted by the cops for smoking weed on the 50-yard-line, and Mitch (Wiley Wiggins) comes face to face with both his own sexuality and the authority of his awake-at-dawn mother. That last one has to be a confusing juxtaposition in his mind.

But this also speaks to the fluid, unfixed nature of these events and flexibility of memory. As they note, no one remembers who won a fight, only that there was one, and this night will change as the participants remember it and share the tale, focusing on one or another thread. For Pink, this is just another night, one in a long series that he and his cohorts, both on the football team and elsewhere, have experienced time and again, and likely will in the future. One of the reasons Dazed and Confused holds up so well over the years is that it’s easy to imagine this night playing out in perpetuity; it’s a magical night, but also every night.

For Mitch, however, this is the best night of his life. He won a baseball game, got his ass kicked, threw a bowling ball through a car window, helped his friends pour paint on Ben Affleck, and cruised around and got high with Matthew McConaughey. That’s a memorable evening for anyone, but, as with Pink, the implication is that this is one in a long series of such nights. He’ll always remember this and cherish this one because it is the first, but what about the second, the third, the tenth, the 20th? Where will those fall? The significance, with time, will start to dwindle and fade away. It’s never going to be this good again.

Posted by Brent McKnight at 8:19 AM