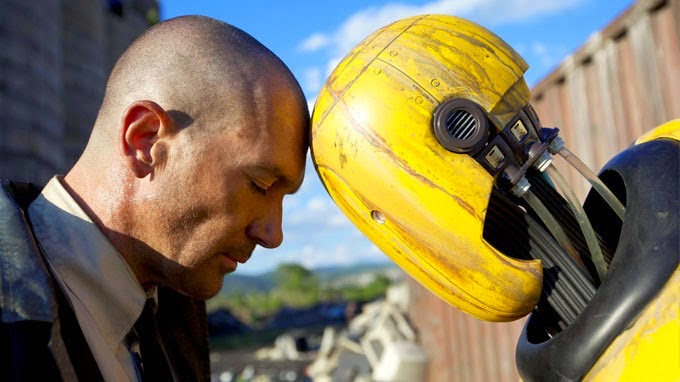 Gabe Ibanez’ new sci-fi feature Automata is not a terrible movie by any means, but it is very, very familiar, to the point where little, if anything, comes across as original. If you were to break it down, you could damn near name the movie where each individual scene originates. You can’t help but notice direct lifts from Blade Runner, I, Robot, Dredd, Mad Max, District 9/Elysium, and countless others. Not to mention a variety literary allusions—Asimov and Philip K. Dick especially. This is like a hodgepodge of genre influences all thrown together, and all of this combined adds up to a movie that is wildly okay.

Automata desperately wants to be a movie about big themes and ideas, like what it means to truly be alive, to truly be human, and what happens when the technology we create eclipses our ability to control and even understand it. And then the film touches on environmental catastrophe, corporate control, home, family, dreams, and even conspiracy. Just as it is an aesthetic grab bag, so is it a thematic one, with everything you can think of tossed and jumbled together in for the hell of it. As a result, it never truly digs into any single thread; this is an idea movie without much of an idea.

The movie begins with not one, but two massive dumps of information. Title cards inform you that it’s the year 2044 and the world has become a radioactive wasteland where 99.7% of the human population has died. What humans remain alive are crammed into packed cities (think Mega-City One by way of Blade Runner), communication is impossible, and robots called Pilgrims are created and sent out into the wilderness in the hope of finding other survivors and new places to settle. Then there’s one short scene, followed by a credit sequence superimposed over the story of the Pilgrims told via news clippings. You see the hopeful beginnings, when they were heralded as the hope for humanity, predictably followed by that honeymoon period wearing off. Automata basically spends the first ten minutes throwing facts at you, hoping they stick, and  reiterating them throughout.

As with all movies of this sort, the robots have protocols, two of them. First, they can’t harm a human, and second they can’t repair or alter themselves. Guess what happens? They may be breaking their protocols, which is where Antonio Banderas’ Jacq Vaucan comes into the picture. He’s a dissatisfied insurance agent who works for the company that manufactures the Pilgrims, has a pregnant wife, and dreams of an idyllic childhood that may or may not be real. Through a series of occurrences he winds up looking for the mysterious “Clockmaker” who is altering these bots, even though he’s the only one who believes this person exists. There are, of course, forces that don’t want him to succeed. 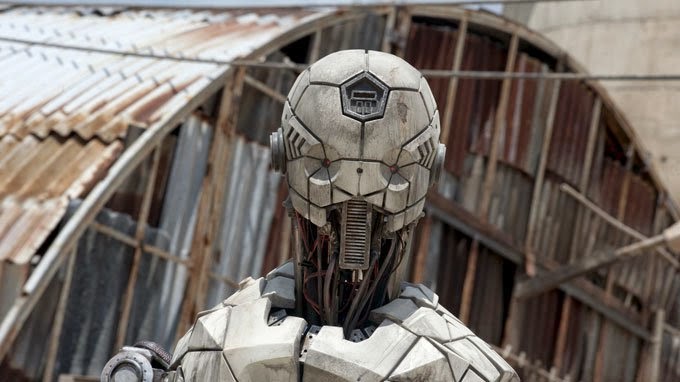 There are some worthwhile bits in here. Though you’ve seen similar stuff before, the robots are creepy, the depiction of the ruined future is suitably grim and gritty—Jacq frequently has dusty handprints on his shaved head—and Ibanez makes excellent use of settings and locations. You get nice, though minor, tweaks to the formula, like a homeless man with robot that spare changes for him. But the film never feels like more than a demo reel, like a young filmmaker recreating scenes from better movies and auditioning for a job.

Banderas is fine as the harried bureaucrat who feels trapped and hopes for something better, but the melodrama of the scenes with his wife (Birgitte Hjort Sorensen) is ridiculous, even down to the sappy score. Dylan McDermott plays a grizzled, over-the-top-to-an-absurd-degree cop, who always wears sunglasses, even in the middle of the night during rainstorms, and is laughable at best. Melanie Griffith does double duty, both as a doctor and as the voice of an altered sexbot named Cleo—the stilted, robotic delivery is far more suited to an expressionless automaton, and as a doctor, it feels like she hardly read the script before hand.

Automata does, admittedly, take a slight upswing as you get closer to the end. The pace picks up, and it’s telling that Jacq is most engaged and engaging when surrounded by nothing but robots. By that point, however, you’ve already sat through 75 or 80 minutes worth of a too-generic film (this doesn’t need to be 110-minutes long), and there’s not enough to hook you. It’s like Ibanez had the idea of the end, but never quite figures out how to get there.

At one point Jacq screams, “I am human,” Cleo asks, “If humans made robots, who made humans?” and they even lift the “life finds a way” line directly from Jurassic Park. That’s what you’re dealing with in Automata. It’s all surface, all things you’ve seen before, and done much better, and nothing sticks. You may see some glimpses of potential in Ibanez as a filmmaker—technically he’s sound, the look of the world is appropriate, if derivative—if he had another script, but you should really watch any of the dozens of movies that Automata riffs on instead.

Posted by Brent McKnight at 5:17 PM