'The Walking Dead' Season 5 Review: "Strangers" Carves Off A Chunk 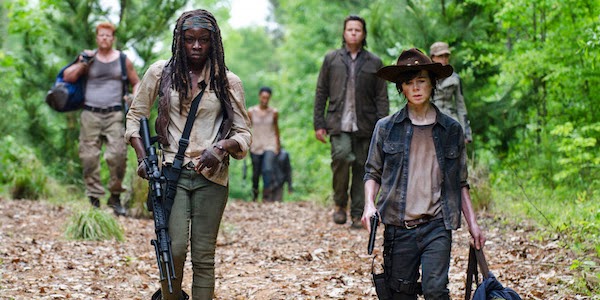 Despite having drastic ups and downs over the course of the series, the last half of season 4 of AMC’s The Walking Dead was, by far, the best run in the series, giving me hope, guarded as it was, going into season 5. And thus far the young season hasn’t let me down. After starting with last week’s high-paced, action-centric season premiere, “No Sanctuary,” the massively popular zombie drama returns with “Strangers,” a quiet, moody, contemplative episode that continues to ratchet up the tension and build towards something even bigger.

If you haven’t watched the episode, stop reading now, because we’re going to talk about it, in depth, and this will include a great many SPOILERS.

With Terminus a pile of smoldering ruins behind them, it’s time for the ragtag band of survivors to regroup, both figuratively and literally. All of the survivors of the prison—sans Beth (Emily Kinney), of course, more on that later—are back together, and this is the first opportunity they have to actually interact with one another. Sure, some of them have seen each other for a moment, but they were imprisoned and generally more concerned with not being cannibalized than catching up properly. That’s what this episode is for.

Not only do they have stories and adventures and exploits to share, they’re all carrying quite a bit around with them. Tyreese (Chad L. Coleman) and Carol (Melissa McBride) have the secret of what happened to the two young girls. Abraham (Michael Cudlitz) is still trying to convince everyone to go to Washington so Eugene (Josh McDermitt) can supposedly cure the zombie plague. And then there’s what went down with Carol and Rick (Andrew Lincoln), when he kicked her out.

All of this and more hangs in the air between these characters in “Strangers,” written by comic book creator Robert Kirkman, and at its core, this is an episode about trying to forget things, trying to put the past behind you, and move on. And beyond that, when that approach inevitably fails, it’s about accepting the things you’ve done, that you had to do, and that haunt you, and trying not to give away too much of yourself in the process.

“Strangers” picks up with the crew on the road, a place they’ve been many times over the course of The Walking Dead, but even with all of the tension and secrets in play, this presents a slice of normalcy, of something that looks a lot like happiness. Rick actually spends time with his kids, Glen (Steven Yeun) and Maggie (Lauren Cohan) make out, and Bob (Lawrence Gilliard Jr.) and Sasha (Sonequa Martin-Green) flirt and play a game. You know this calm isn’t going to last forever, or probably even very long, but this episode lets is play out just long enough to show you these characters not facing an immediate threat, and you remember that, beneath all the chaos, they’re real people. It’s nice to see who they are not, for the time being, pushed right up to the brink.

And when things do take a turn, it’s a gradual turn. First, they suspect they’re being watched, and when they hear screams for help, that’s a pretty big indicator. Each of the first two episodes one character has stepped up and reminded Rick, and the others, that they have to help, that they’re still good people, and that’s who they are. Last week it was Glenn, this week Carl (Chandler Riggs) fills that role. It’s this grip on their humanity, however tenuous it may become at times, that sets them apart from the likes of The Governor and the residents of Terminus. 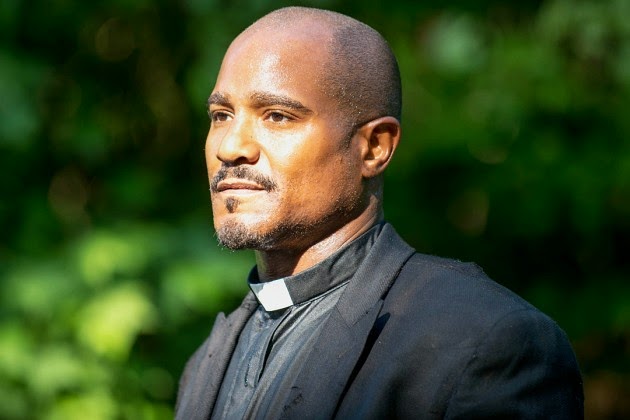 This is where they encounter a new cast member, one familiar to fans of the comics, Father Gabriel Stokes (Seth Gilliam, yet another alum of HBO’s The Wire). He’s frantic, panicked, and surrounded by walkers. They rescue him, but there’s something off. He lives alone in a church—which happens to be in the middle of the woods and is creepy as hell—and has never killed a walker. How has he survived this long? He’s obviously hiding something—he only confesses his sins to God—and Rick doesn’t trust him, but they need a place to crash.

They also need supplies, and, even as Abraham continues to push to move on, they go on a run, which leads to most zombie and action heavy scene of the episode. A crew raids a food bank, and the only supplies are in the flooded basement, full of waterlogged walkers. If you remember the walker in the well back at Hershel’s farm, you have an idea of what you’re in for. Soggy, bloated, rotting, this is the effects department going wild, and should give you more than enough of a zombie fix for this week.

As all of this goes on, the script takes time to make sure to give the actors the opportunity to work with their characters. Michonne (Danai Gurira) continues to open up and reveal brief glimpses of herself. Daryl (Norman Reedus) and Carol work reconnect, and Daryl tries to chip away at the stone wall she’s built around herself, even if she does have one foot out the door. One notable exception to this, however, is Rosita (Christian Serratos), who may as well not even be there, as there is absolutely nothing done with her. She has a few lines that basically only serve to remind you that she’s here too.

With all of their newly procured supplies, they group, including Father Gabriel, has their very own version of a church potluck. Everyone has some wine and a good solid meal, and things start to get real. Tara (Alanna Masterson) comes clean to Maggie about being at the prison, and, in another indicator of moving on, Maggie says all that matters is that Tara’s here now. Abraham seizes the opportunity to, again, push the Washington agenda, asking if they want to survive, merely scrape out a living, or do something more, give their lives meaning, and maybe save the world in the process. Rick, in a rare moment where he can relax, at least as much as he’s capable of—he’s still trying to get a read on their reluctant host—finally consents to that course of action, laying the groundwork for a move.

This might be enough, and many episodes might call it a day here. But from this quiet, mostly reserved episode, they build towards the crazy shit. First, Daryl and Carol spy that black car, the one with the cross in the back window that took Beth, and it looks like we’re going to finally follow that thread and get some answers in that regard.

And then there’s another thing fans of the comics will recognize, and possibly be tenting their fingers over. Though not afraid to branch out on its own, the series has, and will continue to follow at least a rough outline of the story from the comics. At about this time in the narrative, they encounter a group called the Hunters, who, as the name implies, hunt and eat human prey. Initially, I thought the group at Terminus, with their elaborate butcher shop, was going to be the series spin on this arc. Turns out I was both right and wrong. 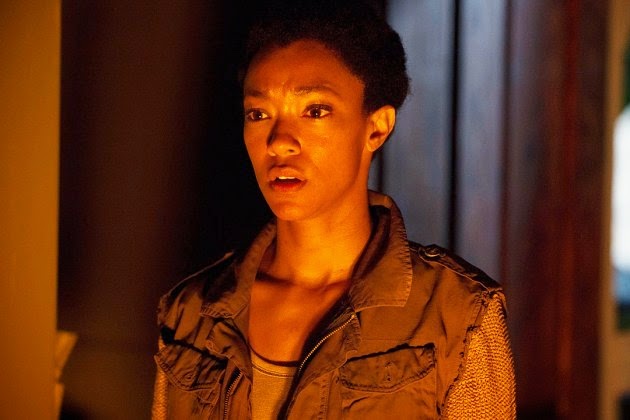 We all know Bob has a drinking problem, so he understandably excuses himself from the festivities after the sacramental wine gets broken out. Outside, having some alone time full of feelings, someone conks him on the head, and when he wakes up, who does he see but Gareth (Andrew J. West) from Terminus, along with some other remnants. Gareth gives a spiel about how this isn’t personal, they’ve just been reduced to doing what is necessary to survive, and comes across as a creepy, weird little cannibal, which he is.

In the comics this is a short, especially brutal arc, one where Rick really, truly shows just how vicious he can be in defense of his people. And from all appearances, this is going to be a mean, nasty turn on the show as well. See, the Hunters don’t just kill and butcher people, they keep them alive as they gradually carve off pieces, and when Bob comes to, he’s not quite the whole man he was at the beginning of the episode. One of his legs is has been removed and roasts over an open fire. That’s not a sight you want to see.

This is obviously building towards a big, violent clash between groups, but thus far, season 5 of The Walking Dead appears to have struck a nice balance between action and the quieter, more human moments, which are what really what connect you to the show and make it worth tuning into week after week. There have been times where I basically watched this show out of some obligation to my longtime fandom of the comics, almost like a sense of duty, but over the last ten episodes, it’s started living up to the inherent potential, and is becoming the show we all hoped it would be.
Posted by Brent McKnight at 11:48 PM