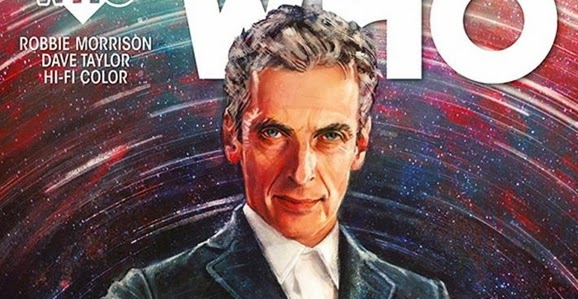 As Doctors Ten and Eleven continue to live on in the pages of new comic books, one series for each Time Lord, Peter Capaldi’s twelfth incarnation has been bringing layer of dark grittiness to the airwaves every week for the last few months. But that’s not enough for him, oh  no, the newest Man from Gallifrey is also getting his very own monthly title from Titan Comics. Clara is along for the ride, too, though she’s still having some issues coming to terms with the Doctor’s new face, and personality. It’s also getting increasingly difficult to juggle her teaching duties with adventures through space and time—she’s one of the cool teachers, even though the kids call her Ms. Oddwald or Ms. Oddbod.

Clara’s school kids are about to embark on a weekend ski trip, to which she is playing chaperone, while the Doctor rails against how humans the great lengths to go beautify what he calls their “packaging.” First thing out of the gate he makes fun of Doctor Eleven and his penchant for wearing bow ties, a fez and using the word “cool.” This newer, grumpier Time Lord apparently has no time for such frivolity. And the biggest thing, Clara doesn’t know how to ski, so the good Doctor is going to teach her before the outing. Of course on a planet with ice sharks, this is an even more challenging task than usual. Imminent fear of death, that’s one way to teach.

As you can imagine, things don’t quite go as planned, and instead of an icy world, they wind up in a sweltering jungle. Hmm, curious. When they investigate the unexpected change, it leads them somewhere they never expected, uncovering a ruthless planetary engineering operation, an ancient Gallifreyan message—the remnants of an early warning system of sorts—and the rise of an unknown new enemy. As Clara says, they’re getting into we’re-all-going-to-die-now territory. 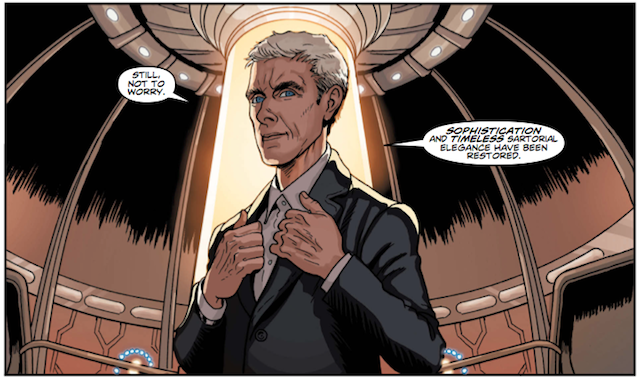 You also probably imagined that there’s a thinly veiled message about messing with the environment, especially doing so when all you hope to do is turn a profit. This is actually also a point that pops up regularly in the Eleventh Doctor series as well. Whatever his form, he doesn’t approve of people doing shitty things for shitty reasons.

While the other titles in the Doctor Who series—Ten, Eleven, and a just-announced Ninth Doctor, which should be an interesting  time—are all essentially starting over, Twelve just kind of jumps into the middle. The others already had their conclusions, and pick up in a time not covered by the series, as they explore previously unknown adventures. A key part of the early going is that they have to pick up new companions. But as you already know, this Doctor already has one in place, with an established rapport, so they hit the ground running a little bit faster. After all, we’re less than ten episodes of Capaldi’s reign, so it’s all still building, and this feels like a part of that.

Written by Robbie Morrison, who has worked on titles like Judge Dredd, Wildcats, and Nikolai Danta, among many others, this is definitely a cranky old man version of the Doctor, and that’s a pretty good time. But there are also tons of the trademark wackiness you expect from Doctor Who, like singing robots and hat-stealing skunk monkeys. It does bog down a bit in the technical minutia of the terraforming for a bit. A tech starts explaining the process and before you know it, it’s two pages later and you’re like, huh? Luckily for you, this Doctor doesn’t have time for such trifles, and isn’t afraid to say so.

All in all, this is, like the others, decently entertaining. Thus far all the others Doctor books have taken a few issues to really get rolling and hit their stride, and while this one picks up a bit faster, there’s still some work to do. Still, they’re really just laying the groundwork, and you definitely get the feeling that we’ll get there before long.

If you still need some convincing to check this out, here’s a trailer for the comic that definitely trades on the more serious, sinister overall tone.

Posted by Brent McKnight at 5:53 PM