'The Book Of Life' Movie Review 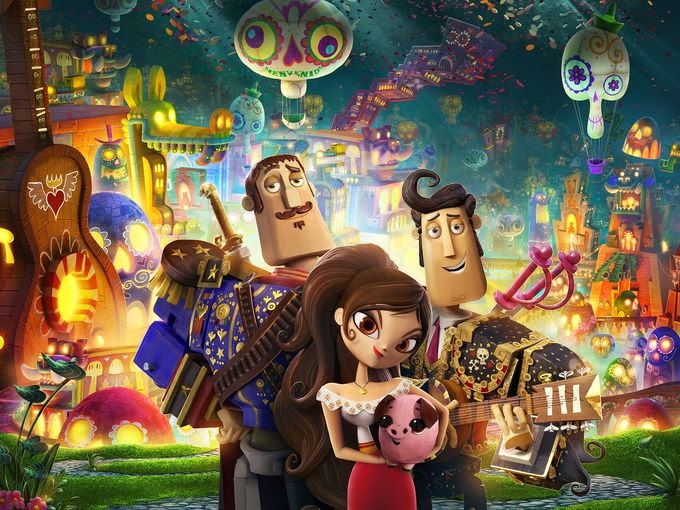 As far as animated kid’s movies go, Jorge R. Gutierrez’ The Book of Life is simultaneously wildly inventive and totally familiar, which are the film’s greatest strengths and weaknesses, respectively. Fortunately for the viewer, one totally supersedes the other, and the end result is a stunningly beautiful movie with a story that, while not particularly original, could be much, much worse, and has enough going on at the periphery that it is still interesting. And to be honest, there aren’t enough children’s movies about death, let alone ones that deal with it as positively as this one.

The core of the story of The Book of Life revolves around your basic love triangle, where lifelong friends, Manolo (Diego Luna) and Joaquin (Channing Tatum), compete for the hand of their other childhood friend, Maria (Zoe Saldana). It’s obvious which one should get the girl and how things are going to pan out, with all of the usual roadblocks standing in the lovers’ way, as well as some that come from way out in left field.

That may not sound particularly interesting, but the characters are strong and charming enough that one don’t mind that this is a story we’ve seen before, and fortunately for everyone involved, almost every other element is incredible.

This primary narrative thread is framed within a larger story about so-called “detention kids” on a field trip to a museum. Not the kind of students who usually dig this kind of educational adventure, the tour guide takes them to a back room and tells them a special story about the Day of the Dead, Mexico’s annual celebration of those who are no longer with us. From here, the viewer dives into the magical world of San Angel, where the three heroes live, and where a wager between La Muerta (Kate del Castillo) and her mischievous husband, Xibalba (Ron Perlman)—rulers of the Land of the Remembered and the Land of the Forgotten, respectively—about the outcome of the budding romance, will have a massive impact on three different realms.

This is where the film distinguishes itself from any other animated work out there, in rendering San Angel and lands of the dead. Produced by Guillermo del Toro, Gutierrez and his team create a cinematic world with a totally unique look that has more in common with bizarro Saturday morning cartoons than you average modern animated feature. In the story within the story, the characters are all patterned on marionettes, articulated and made of wood, though still warm and more human than most pixelated creations. Combining incredible depth of field with a festive Mexican aesthetic, The Book of Life is a gorgeous, vivid, wholly unique mythological adventure that includes a heroic quest through the realms of the dead.

While the love story may be simple, there is a wealth of thematic material swirling around. Life and death is an obvious one, and the way it’s presented is actually one hell of a way to introduce the idea of mortality to kids, to show them the power of remembrance, to celebrate the life lived, not mourn the passing.

Love and destiny both play integral parts, but it is the idea of family, of fathers and sons and parents and children, that may be the most important of the secondary thematic ideas. Manolo is a reluctant bullfighter, driven that way by an overbearing father when he wants to be a musician, and is earnestly brave. Joaquin needs a magical medal to be courageous—a secret gift from the trickster Xibalba—and though he’s cocky and dim, he’s still sweet. He lives the shadow of his own dead father, the town hero for fighting off the notorious bandit, Chakal (Dan Navarro), and Tatum is a perfect fit. Maria, for her part, wants to live her own life, but circumstances and her father keep pressing her into a corner.

Framed at it is, the very idea of storytelling is an important idea to The Book of Life. It may be simple, but the concept of writing one’s own story, creating one’s own narrative, and living one’s own life, is as good a lesson as any to learn.

Though the film makes nice use of notable pop songs—including hits from Radiohead, Rod Stewart, and Elvis—the originals may be what keeps The Book of Life from becoming a modern animated classic, up there with The Nightmare Before Christmas. They’re not terrible by any means, but neither are they particularly inspired or noteworthy, either—they are just bland. They could have used a couple of hours with a team of Disney songwriters, and it’s one element of the film that never measures up to the rest. But they’re still better than Ice Cube’s too broad turn as the Candle Maker, the god-like figure at the center of the myth.

Despite revolving around a formulaic love story and a climactic battle with a largely inconsequential villain, The Book of Life carves out a stunning visual niche and a fantastic world full of memorable characters that provides a different perspective than the typical animated feature. That, alone, makes it worth seeing. And it doesn’t hurt that it has quite a bit more to recommend it. As a result, The Book of Life is a movie to add it to one’s calendar of seasonal holiday movie watching.