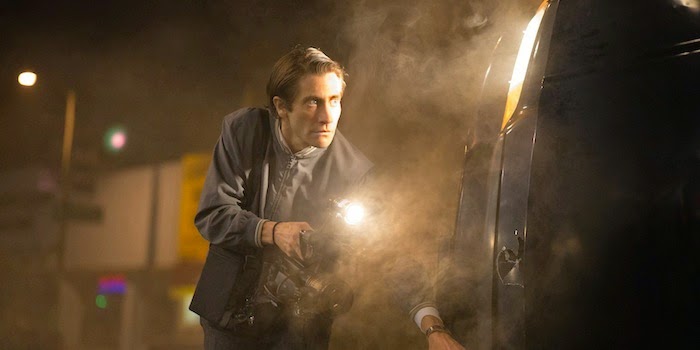 “A screaming woman running down the street with her throat cut.” That’s the image Nina (Rene Russo) evokes when describing her news program in director Dan Gilroy’s tremendous thriller Nightcrawler. It’s tempting to adopt that as a metaphor for the entire film—Gilroy’s first, by the way, which makes his achievement doubly impressive—but while that is definitely part of the equation, what drives this movie forward is the menace that lurks just below the surface, beneath a calm exterior personified by Jake Gyllenhaal’s Louis Bloom.

A nocturnal rambler who scrounges for anything he can steal and sell, bolted down or not, Lou is a motivated self-starter. Full of meaningful acronyms, manufactured self-confidence, and drive powered by self-improvement seminars, catchphrase wisdom and insight, he’s looking for a career to break into on the ground floor. When he comes across the lucrative world of nightcrawlers, freelance stringers who race after breaking news stories—the bloodier, the better is the prevailing wisdom—he has the ambition, opportunity and, most importantly, the moral flexibility to excel.

Gyllenhaal, who shed in excess of 30 pounds for the role, has rarely—if ever—been better. Lou is calm, frank, goal oriented and even borders on charming at times, but this measured exterior belies the inherent violence you spend the entire movie waiting to see erupt. He has a hungry, animal energy—he’s often visually equated to a coyote—like a sociopathic used car salesman who isn’t afraid to use manipulation to secure a sale. And failing that, you’ve no doubt that ripping out the jugular is a viable option.

With his lax concerns about ethics, journalistic or otherwise, Lou traffics in human misery, never afraid to step across a given line, both metaphorical and police issued. And because of this, his footage is ratings gold, which leads to a symbiotic relationship with the vampiric Nina, who runs the night shift news at the lowest-rated network in town. Russo is also at the top of her game here; ruthless and desperate, she thinks she’s found a rube in Lou, only to be terribly surprised. As he continues down his dark path, pushing further beyond the boundaries and into extremism, she’s right there with him.

Nightcrawler circles around a bit before finding a rhythm and getting to the real meat, and is almost procedural in the way Lou gets into the trade. But once the momentum picks up, it doesn’t stop. As Lou grows more unhinged in his quest for the perfect shot—he doesn’t hesitate to move what may be a corpse, or a seriously injured man, at an accident scene for better composition—the film becomes a scathing indictment of an industry that favors ratings above all else, including information.

There’s a sharp, equally vicious class divide that cuts through the nightcrawler craft—wealthier neighborhoods and whiter skin translates to more eyes on the screen. You don’t learn anything specific about Lou’s background, but much is hinted at through Gyllenhaal’s controlled fury. He’s lonely, broke and broken. With his continual self-education—everything he says could be a quote from a flavor-of-the-week, how-to-succeed-in-business book—he has the air of a prisoner with a lot of spare time on his hands to read. He’s manufacturing his own up-by-your-bootstraps, rags-to-riches tale, augmented at times by James Newton Howard’s score, and is the hero of a narrative of his own divining.

While Gyllenhaal and Russo take center stage, they’re propped up by a few nice supporting performances. Riz Ahmed as Rick, Lou’s navigator, sidekick and second camera, is dimwitted and beleaguered, not sure he signed up to be part of an enterprise his boss runs like a Fortune 500 company, all for $30 a night. Bill Paxton also appears as a slimy veteran nightcrawler, bringing a layer of smarm and sleaze like only Paxton can.

From the very first shots, which paint Los Angeles as idyllic and peaceful—a façade that doesn’t last long— Robert Elswit’s cinematography may be the unsung hero of Nightcrawler. Paul Thomas Anderson’s go-to guy, Elswit gives you a cold distance, much like Lou films the graphic scenes of human lives lying in ruins. He watches his camera, never seeing the scattered bodies as anything more than objects, and that’s how Elswit shoots. You focus on Lou; everything else hovers hazily in the background, inconsequential. Elswit has also lensed big action blockbusters like Mission: Impossible—Ghost Protocol and Salt (he was also the DP on The Bourne Legacy, which Gilroy wrote), so the many high-speed moments in cars are presented with a dynamic visual flair, striking a solid balance.

Balance is key to Nightcrawler. Lou, and the movie as a whole, walk a tightrope with little room for error. A moment too late and Lou has nothing, whereas a misstep could send the film plummeting into absurdity, farce, or worse yet, unbelievability. But Gilroy’s script and Gyllenhaal’s ravenous performance keep it reined in, and tightly. Nightcrawler is tense and intense, ferocious and obsessed, and crackles with energy and a dark sense of humor.