7 Sci-Fi Halloween Costumes You May Want To Avoid 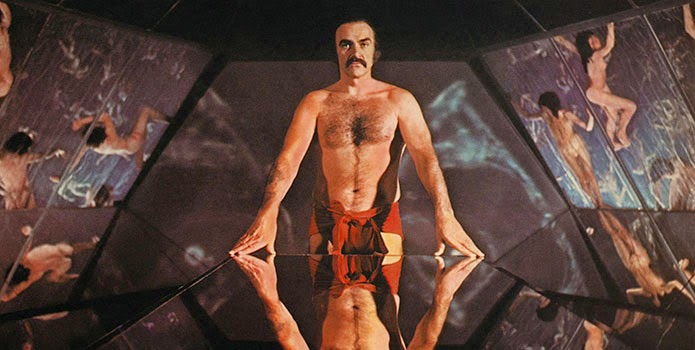 Halloween is coming, and while there’s always a lot of talk about potentially awesome costume designs, every year people don and assortment of truly questionable outfits. To help steer your holiday in the right direction, we’ve compiled a list of sci-fi themes you may want to steer away from to ensure a smooth, hassle free night of handing out candy and getting wasted.

Astronauts are totally awesome and brave and have seen the world from a totally different perspective than anyone else, but dressing up like one can prove problematic. Wear this bulky ensemble to a party and you’ll get tons of compliments, but you’ll also sweat like a damn marathoner and piss off your hosts and other revelers because every time you turn around, you run into someone else or knock over everything in the house. Then again, that’s what people get for going to/throwing a party.

No one looks good in skintight leopard print, I don’t care how much time you spend in the gym. Again, like the astronaut, that’s going to get sweaty pretty damn fast, only with the added bonus of every time you step outside, you’ll immediately be cold as all hell. It is fall after all. And if you decide to go deep into your character and speak in that obnoxious, shrill Ruby Rhod voice from The Fifth Element, it’s going to play hell on your vocal chords. With Halloween on a Friday this year, that may not be a huge issue, but if you intend to talk to anyone the next day, it’s something to consider.

Tainted Meat, aka Bob Stookey from The Walking Dead

This is, admittedly, a pretty cool costume idea. Timely, funny, and it’s based on someone dying in a TV show, so it’s not mean spirited like some other costumes we’ve seen going around and won’t make you look like an asshole. That said, it may be hard to pull off. We’re assuming that, if you’re not African American, you won’t go in blackface, because that would make you an asshole, but you will have to do something about your extra leg (assuming you have two). Eventually that will get uncomfortable, and unless you can come up with an optical illusion workaround, you’ll have to hobble around either on one leg or on crutches, and over the course of your night, that’ll start to get old. Not to mention the potential hazards if you decide to imbibe a few adult beverages.

Similar to the astronaut, dressing up like this Hunger Games character, with her frilly, expansive outfits, could lead to some logistical problems in crowd situations and public gatherings. You’ll likely poke someone’s eye with stray feather or bamboo shoot or some other ridiculous thing. And as elaborate as all of her ensembles are, if you haven’t started on this one by now, you’re probably not going to be able to knock one out by Halloween unless you already have one laying around for some reason. Even if that’s the case, you don’t want to be the one recycling costumes.

If you pull this off, dressing up like one of the scariest movie monsters of all time can be a great option. But this is another difficult, elaborate costume that takes a great deal of time, patience, and skill to do right. And it’s not going to be appropriate in every setting. Going out for the night, sure, by all means, do this one up, but if you’re staying at home, handing out candy to children, maybe go another route besides terrifying local kids. You’re only going to give them nightmares, which disgruntled parents are then going to have to deal with, and as a general rule, it’s never a good idea to piss off your neighbors. Unless you don’t like them, then by all means, terrify away.

There is nothing wrong with dressing like Uhura. She’s an incredible character, a badass and a trailblazer, but dressing like her, or really any female character from Star Trek, comes with its own set of complications. You’ll spend all night fending off unwanted advances from every lecherous drunk dick dressed up like Captain Kirk.

This sci-fi phenomenon gets its very own subcategory. Dressing like Sean Connery in Zardoz, Voltan from Flash Gordon, or even Humungus from The Road Warrior, takes a certain level of confidence and comfort with your own body that most of us don’t possess. And remember what I said about skintight leopard print? That does double for one of these outfits. If you go out, it will provide a level of coolness and breathability in crowd situations, but forget about stepping outside without shivering. And if you stay home to dole out candy, answering the door and talking to children dressed like this is going to get you a visit from the cops and a place on a list you’d rather not be on. Besides, this was done to death a few years ago after Borat anyway.

So there you have it, a list of potentially hazardous costumes that, while they may initially seem like a good idea, come with their own pitfalls. Are you dressing up this year? Let us know what as below. In six years living in my house, we have never had a single trick or treater, so I usually spend the evening at the dive bar a block away.
Posted by Brent McKnight at 1:27 PM

Wow, excellent post. I'd like to draft like this too - taking time and real hard work to make a great article. This post has encouraged me to write some posts that I am going to write soon. werewolf halloween costume ideas