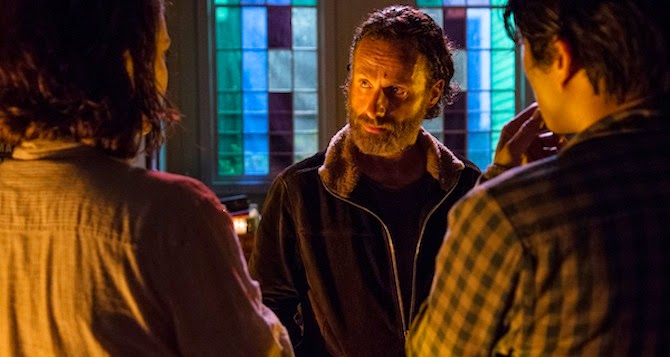 As we approached the premiere of season 5 of TheWalking Dead, AMC’s mega-popular zombie drama, my biggest question was whether or not they could maintain the progress and momentum created over the second half of season 4. By far the best run in the entire series, I wasn’t a huge fan of the season finale, but here we are, three episodes into the young season 5, and they not only kept it going, they’ve started building even more. The season started out with a tense, action heavy debut, and followed that up with a more introspective episode, which brings us to tonight’s installment, “Four Walls and a Roof. And this is the episode fans of the comics have been waiting for.

It should go without saying, don’t read this unless you’ve already watched the episode, or you just don’t give a damn, because we’re going wade through some deep ass spoilers.

When I say this is the episode comic fans have been waiting for, I don’t mean from a story perspective. Even with some significant derivations, the series has always followed Robert Kirkman’s comics, at least in a loose manner, and the current arc, plot point by plot point, is one of the closest translations yet. But what I mean when I say this is that now more than ever, The Walking Dead feels more like the source material than it ever has.

The characters have been pushed and developed to the point where they’re very close to the ones we know and love from the black and white pages. Where they are now, as a group and as people, they’ve finally found the precarious balance that Kirkman pulls off in his panels between the brutality of necessity and holding onto their humanity. It’s a constant struggle, with each extreme pulling at them in opposite directions, that is where The Walking Dead derives so much of its tension and narrative heft, and never has that been more apparent than in “Four Walls and a Roof.”

When we last left our intrepid group of survivors, things weren’t going so well for Bob (Lawrence Gilliard), having been kidnapped by Gareth (Andrew J. West) and the other leftovers from Terminus. Not only were they holding him prisoner, they were eating his leg, right in front of him, which is kind of a dick move if you ask me.

That’s where we pick up this week, with Gareth giving a creepy monologue that is intended to both creep out Bob, and by extension you, and simultaneously justify their cannibalistic actions. You do also learn that pretty people taste better, which is a topic I’m sure you’ve always wondered about. Oh, but are they in for a surprise. Bob does that thing where you think he’s crying but it turns out he’s laughing, because, as he says, they’re eating tainted meat. Last week, when we thought Bob, a recovering alcoholic, left the gathering at the church to get away from the booze, he was really wandering off because he had been bitten by a walker and has some serious feelings on the subject.

Back at the church, Sasha (Sonequa Martin-Green) searches for Bob, and Carol (Melissa McBride) and Daryl (Norman Reedus), who are also missing, but we know they went after the people who took Beth (Emily Kinney) last season and have nothing to do with Bob’s predicament. No one trusts Father Gabriel (Seth Gilliam), and when confronted, he spills his secret, revealing why he’s so jumpy, ashamed, and why the outside of his church says he’s going to burn in hell.

When he says he’s been alone all this time, he means it. When the zombie shit hit the zombie fan, he was safely locked away in his church. Which is exactly where he stayed, even as his parishioners showed up, begging and screaming to be let in. In his cowardice, he left dozens of people, people he knew, his friends, his flock, be ripped to shreds because he was too afraid to open the doors. That’s enough to mess with anyone’s head; it haunts him and he can’t escape. 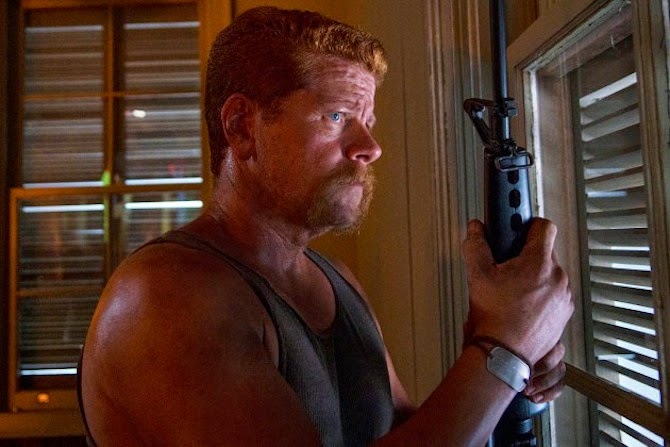 The Hunter’s bring Bob back, he tells the others what he knows, and Abraham (Michael Cudlitz) says they need to go to Washington, like right this moment. Rick (Andrew Lincoln) does not agree, and they start what is sure to be a longstanding pissing contest where they push each other back and forth and butt heads. There are some words exchanged, and finally it is decided that Abraham’s group will stay long enough to exact a bit of revenge, but then they’re gone, with Glenn (Steven Yeun) and Maggie (Lauren Cohan) with them.

Within all of this mess, Glenn gets what is easily his best moment of season 5 so far. He’s been woefully absent from the foreground of the story. Sure he’s around, but he’s lucky if he gets a line or two, and hasn’t had much to do. But now he asserts himself and finally has something to work with.

And here is the biggest difference in The Walking Dead under new showrunner Scott Gimple, as opposed to the previous regimes. The group is decisive and takes action where back in season 2 or 3, there would be multiple episodes devoted to endless, pointless debate that concludes with no real choice being made. Now they’re presented with a situation where they face a difficult crossroads, where neither option is particularly favorable, but they have to do something, anything, and they actually do.

What they choose is the gnarliest, most brutal moment in the entire series. They set a clever trap, or at least a clever enough trap. If you’ve watched more than a couple movies in your life, you see what they’re doing. Rick plays with Gareth’s ego. He thinks he’s smart, he thinks he’s ruthless, but he’s hasn’t seen anything yet, and is about to learn just what Rick is capable of. And so are you.

It’s a slaughter. That’s the only way to describe what happens. Again, you know what to expect in a general sense, but what The Walking Dead delivers is rough and gory, and you watch it with your eyes wide and your mouth hanging open. That doesn’t happen to me often, especially watching basic cable TV, but bearing witness to this scene my only reaction was, “Damn.” Let’s just say they don’t want to waste precious bullets, so there is a lot of stabbing involved. Rick uses a machete.

Even with this harsh, horrific scene, where they viciously murder a group of people, they still maintain a tenuous grip on their humanity. No one likes what they did, this wasn’t the best choice they had, it was the only choice, a very real them-or-us scenario. At one point, begging for his life, Gareth says his group will leave, walk away, and the two parties will never meet again. And you believe him, you know he’s telling the truth in that moment. The problem is, they’ll meet someone, they’ll eat someone, and Rick knows this.

No one is at ease with this course of action, not even the vengeance hungry Sasha, and that’s what really sets them apart from Gareth’s group. On some level, the Hunters are, as he says, acting out of necessity. It’s cannibalism or starvation. But they do so without remorse, without a second thought, and in the process have become something best described as monsters. There are obvious parallels drawn between the two groups—both take people in, both are capable of great violence, both do terrible things in the name of survival—but it is also very clear where the line between them is drawn.

It’s in the saying goodbye to Bob—sweet Bob, optimistic to the very end—where “Four Walls” illustrates this point. Like I said earlier, this the episode where The Walking Dead finally strikes that balance between the brutal and the humane, between the dark and the light. It’s grim and gritty and full of death, but this episode still retains a sense of hope whereas previous seasons have bogged down in complete, utter, desolate despair. As Rick stands there, holding baby Judith, you remember Gareth’s speech before the credits, where he talks about starving bears eating their young. After all, they can always have another cub. Rick may look pretty grizzly, but the divide has never been so clear.

“Four Walls and a Roof” is some of the best writing in The Walking Dead to date. It’s tense and eerie, legitimately moving, and moves everything forward, from character perspective as well as story wise. And as if that’s not enough, it leaves you leaning forward and wanting more. This hour is full of cryptic touches that you know will pay off down the line, and there’s always more going on than you fully realize.

Daryl and Carol aren’t in this episode at all, at least until the very end. We know they went after Beth, and at the very end, as Michonne (Danai Gurira) sits with her newly reclaimed sword, something you can tell she has mixed feelings about (I know, Michonne shows actual emotion, it’s weird but rad), Daryl pops out of the bushes. There’s someone is with him, but it cuts to black before they step out of the shadows. And you can’t help but wonder, from his response to Michonne’s questions, if something bad happened to Carol.
Posted by Brent McKnight at 11:49 PM