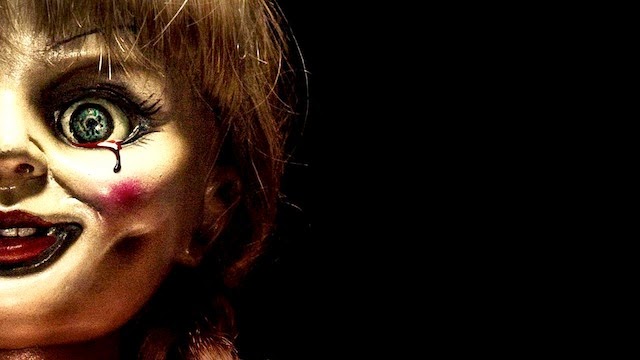 Remember that evil doll from “The Conjuring”? It’s the kind of hellish looking children’s toy that you think no one would ever possibly give to a real child because just looking at that nasty smile would give it nightmares. Obviously, the first thing you thought walking out of James Wan’s film was, “that creepy doll needs its own movie,” right? Didn’t everyone think that? It sure seems that way, because that’s exactly what we now have with the prequel “Annabelle.” And if you think making a feature-length movie out of the backstory of a sinister doll—from the director of “The Butterfly Effect 2” no less—might be stretching the concept a bit thin, you are correct.

Honestly, if you stumbled across this in a video store—if there’s still an open video store within a 50-mile radius of where you live—and picked up this movie you’ve never heard of on a grainy, warped VHS tape, you might have discovered a minor classic. “Annabelle” feels like a slapdash, early 1970s, grindhouse-y attempt to capitalize on the success of better movies, like “Rosemary’s Baby” and “The Exorcist,” both of which are continually referenced here in the most heavy-handed manner. The apartment building the two main characters move into even looks just like John Cassavetes and Mia Farrow’s place from the Roman Polanski classic.

The problem is that this is 2014, and “Annabelle” feels as stale and stilted and bland as is if was 35 or 40 years old and had been forgotten. It isn’t terrible or offensively bad, but it’s so generic and paint-by-numbers that even as you watch it, you’re painfully aware of exactly what’s going to happen. Mia, another nod to “Rosemary’s Baby,” played by Annabelle Wallis (you can just imagine the producers high fiving each other after they cast a star named Annabelle their movie called “Annabelle”), and John (Ward Harris), are the most vanilla, idyllic couple ever rendered on film. She’s pregnant, he’s about to finish med school and become a doctor, they’re in love, and they live a peaceful, only-in-the-movies perfect life.

Mia also collects horrendously eerie dolls, and when John gives her a gift, a doll that she’s been searching years for, you know things aren’t going to end well. Just once I want someone in a horror movie to say, “Oh great, you got me a hilariously creepy doll, no thanks,” and have that be the end. But when a satanic, Manson Family-style cult breaks in, things take a turn for the worse. In a move straight out of “Child’s Play,” the doll gets possessed and the film runs through every last genre trope you can think of.

A mobile starts spinning on its own, record players and sewing machines start working when no one is in the room, rocking chairs rock themselves, ghostly figures walk past doorways behind the characters, and try as they might, they just can’t get rid of this damn doll. Even after they move and have the baby, Mia continues to be haunted by this ghost or demon or whatever. They turn to their family priest (Tony Amendola) and their wise black neighbor (Alfre Woodard), who even says, “I’m old, I know things.” At a point it becomes comical, and you wait to see what lazy cliché they dust off next. Demons on the ceiling? Check? Elevator doors that close too slow? Check. But after it’s funny for a moment, it gets tired, drags the pace of the film down to snail’s gait, and lumbers through the finish.

This oversimplification infects the entire movie. No one—not the husband, not the priest, not the neighbor—ever, for one second, has any doubt that evil forces haunt Mia and the baby. In one scene John suggests maybe there’s some post-partum depression, or something similar going on, Mia says, “no, it’s demons,” that’s all the discussion there is, and they start reading books that conveniently have all the answers they’re looking for. Handy.

As a horror fan, it’s hard to knock any genre release that actually makes it to movie theaters, especially R-rated horror (this most certainly does not need to be rated R). There are so few anymore that the immediate impulse is to champion this, the logic being that if “Annabelle” is a success we’ll get more options to choose from. But why did it have to be this movie? Even if they tried something different and failed in spectacular fashion, that would be better than “Annabelle.” Everything is so rote, you see every last jump scare coming—there’s one solid attempt, but it’s appeared in damn near every trailer and TV spot, which ruins the impact—and it’s all so easy and lazy that it’s like there’s nothing here.

Posted by Brent McKnight at 1:42 PM