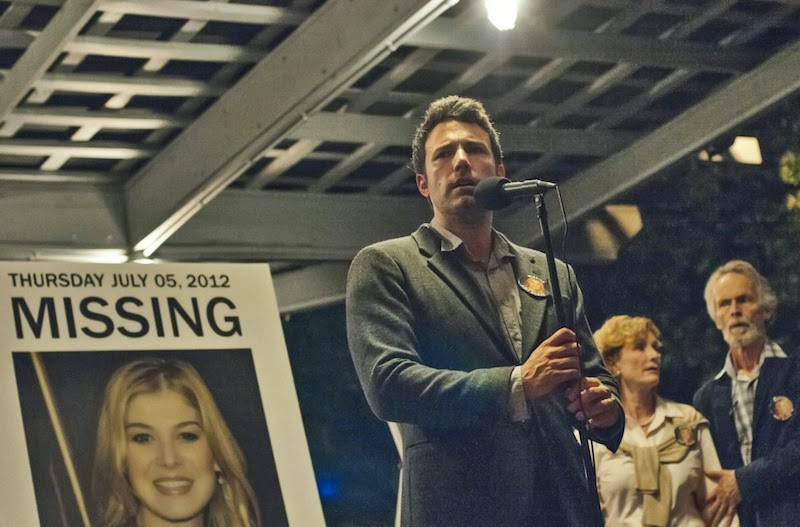 When David Fincher’s “Gone Girl” starts out, Ben Affleck’s Nick Dunne is just a normal guy, taking out the trash on what looks like just another normal morning. But this day is anything but normal. First, it’s his fifth wedding anniversary, and you know from word one that it’s not a happy marriage. It’s also the day that his wife, Amy (Rosamund Pike), goes missing and Nick becomes the most notorious man in the media-hungry world. What follows is part mystery, part thriller, and part razor sharp indictment of our news-as-entertainment society, all wrapped up with constantly shifting ground and a wicked sense of humor you don’t see coming.

More than anything, “Gone Girl” is awesomely artistic trash. This may be the classiest, highest-budget, borderline exploitation film you’ll ever see. Ingeniously, gleefully devilish and debased, this is modern pulp noir with all the trapping: a femme fatale, an elaborate con, a bad person duped by someone even worse, and so on. All of this plays out in the arena of the hyper-aware public eye, where we don’t watch the evening news to be informed but to be entertained, and crimes are tried in a skewed court of public opinion long before they ever go before a judge or jury, where the best soap opera on the air is the one that’s true. As Nick is accused of doing something terrible, people set up lawn chairs across the street from his home, as if they’re watching a football game, and his life becomes a spectator sport.

The idea of truth is as the center of “Gone Girl,” and Fincher, working from a script by Gillian Flynn, who adopted her own best-selling novel, presents this not as a solid, not as something static, but rather as a fluid concept. What is true and what is not depends very much on the view from where you stand, a point the film drives home with vicious glee. Meticulous and clever in the way it subverts your expectations, the narrative leads you one way, only to reveal that you in the audience have been duped, exactly like the characters on screen.

While the drama of Amy’s disappearance unfolds, you bounce back and forth in time, bearing witness to the meet cute origins of Nick-and-Amy, the singular entity, a nice juxtaposition with the broken, tedious, vindictive hell their marriage ultimately becomes. The mystery unravels in front of you (you think) at the same time you watch the arc of their marriage take a nosedive. As simple as the set up in “Gone Girl” is—the story can be summed up as a man looking for his missing wife—it is anything but. 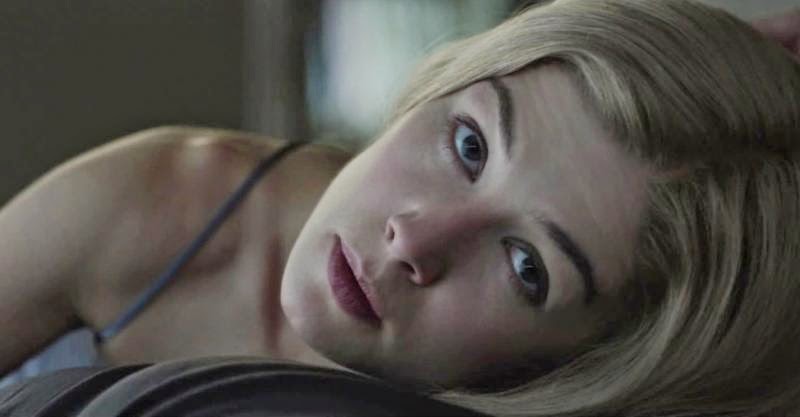 Monumental shifts in the narrative framework punctuate the film, arriving just when you think you have things figured out, and the picture Fincher paints in front of you is a cynical mind-fucker. You alternately sympathize and vilify each of the main characters. Nick is, at various times, victim, object of pity, object of scorn, villain, dupe, heel, and more, sometimes all at once. Protagonist by virtue of his place at the center of the story, Nick, even at his best, is nothing that can be called a hero. A slow burn boiler, “Gone Girl” gradually builds until you’re soaring at manic, lunatic heights where you can only plummet.

Affleck and Pike shine in their respective roles. Slick and hard to get a true grip on, they each play multiple parts—within their marriage and their private lives, with each other, and in the public eye. There are magnetic depths and layers to each of them, they’re both chameleons to varying degrees, and they adopt the appropriate disguise based on their given surroundings. Their whole married life is built on lies, deceit, and carefully manufactured and presented versions of who they are and how they want to appear. As their world broadens, so do the parts they play. Affleck brings his charm and likeability to Nick, even at his worst; and in Pike’s hands, Amy’s schemes and manipulation feel like the product of Hitchcock’s ghost.

Strong supporting players prop up this central duo. Carrie Coon plays Nick’s too-trusting sister Margot. Kim Dickens is spot-on as the Missouri detective on the case, who you can’t tell if she’s working out of her depths or has the most adept eye of anyone in the film. Neil Patrick Harris is a blast from the past, and Fincher gets a ton of work out of actors in smaller roles that could have easily been throwaways, like Scoot McNairy and Patrick Fugit.

It’s Tyler Perry, however, who is the highlight of secondary cast, playing the fast-talking, electric, big-city celebrity lawyer, appropriately named Tanner Bolt. A rock star in Brooks Brothers, he refers to himself multiple times as Elvis, and is the only one truly gets it, who truly understands exactly what is going on. Not in the sense that he knows all the keys to the mystery, but in the larger sense, in his knowledge that there’s a game in play, and he is having an absolute blast—both Perry and Bolt—playing it.

Taut mystery, tale of a marriage gone horrifically wrong, “Gone Girl” is best when it frustrates your anticipation and veers in drastic, unexpected directions. We’re not talking a sudden, out-of-the-blue twists here, the plot is meticulous and precise in its build up, and though you don’t see the shifts coming, they’re totally earned and warranted. You may think to yourself, holy shit, how did that happen, until you look back and see the precise trail of events that led you to where you wind up. There’s a logic, reason, and accountability to the each maneuver, and you’ll want to hold on and wallow in the gleeful psychotic trashiness along the way.

Posted by Brent McKnight at 3:57 PM