By now we’re well into the reign of Time Lord number twelve on Doctor Who, played with swagger and an edge of dickishness by Peter Capaldi. Still, there are likely some, possibly many, of you out there who miss the human cartoon that was Matt Smith’s eleventh incarnation of the character. But fear not, that version of the long-lived, beloved character is still alive and well, albeit in a drastically different form, that of comic books. It does actually seem like a fitting medium for a rendering of Smith, and the newly minted continuing series is back with issue #3, “What He Wants…” and it has what you need.

Over the course of the previous two issues, the Doctor picked up a new travelling companion, a sarcastic, unemployed librarian named Alice, who has, thus far, fit into his adventures rather nicely. She’s shown she can handle herself in a tight spot or two, and that trend continues in this latest outing. Issues #1 and #2 have been more episodic in nature, like standalone installments of the show, but now you start to get a larger narrative arc coming into play, which was something of a worry before. As fun as these separate escapades can be, your attention was going to start wandering before long.

On this particular jaunt, the Doctor and Alice, accompanied by an early version of Alice’s dead mother’s favorite rock star—a kind of proto-David Bowie—wind up back in Mississippi in 1931. The overall story is a parallel with the Robert Johnson selling his soul to the devil to learn how to play guitar legend, which, incidentally enough, also prominently features Robert Johnson. Turns out he and the Doctor are old pals, and you can probably imagine how they go together. 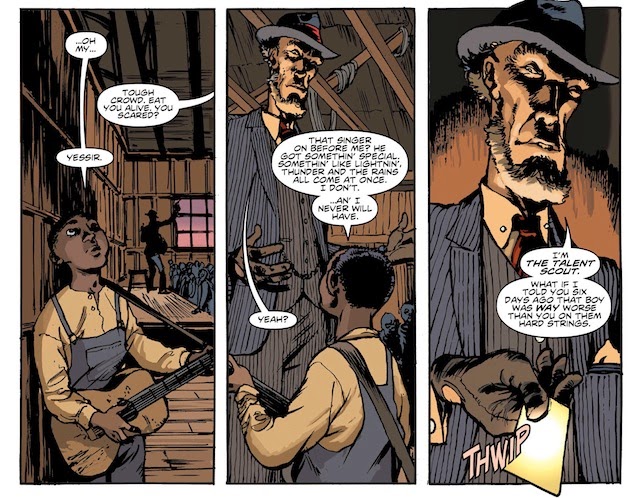 But there are also more sinister doings afoot back on the Delta, and the mysterious ServeYouInc, who you may remember from the theme park debacle in the last episode, has reared its ugly head yet again. And this time, they snare the Doctor with their sales pitch, so it’s up to Alice, the least charismatic rocker in the history of popular music, and a monster truck named Bessie to save the day. But even with potentially dire consequences and mildly serious overtones, this is a bouncy, bounding undertaking that skips from event to event.

Beyond the up-tempo fun and adventure of this particular story, something much grander and wider is being set up. ServeYouInc is obviously up to no good, and this is something the Time Lord and his companion are going to need to look into in greater depth moving forward. You also get hints of what’s going on inside that strange little head of the Doctor—you get hints at his greatest hopes and dreams and desires—which certainly promises to be an interesting avenue to explore.

Even with a storyline that’s beginning to sprawl, the Doctor Eleven comics are still taking a very different approach than the Doctor Ten series, also from Titan Comics. While each issue of this run is an individual, standalone adventure, with the other, each monthly title feels more like a smaller piece of an episode. It’s almost as if each issue ends with what would be a commercial break on the show, picking up moments after you leave off.

This early into the run, the individual issues are still a great deal of fun, but you’re glad to see a bigger picture start to form. If that wasn’t there, all the fun, wacky shenanigans in the universe weren’t going to keep you buying this title from month to month, but they’re definitely moving in the right direction. This is the Doctor at his popcorn peak, running around through time, dragging random stragglers on adventures, and basically having a damn fine time of it. 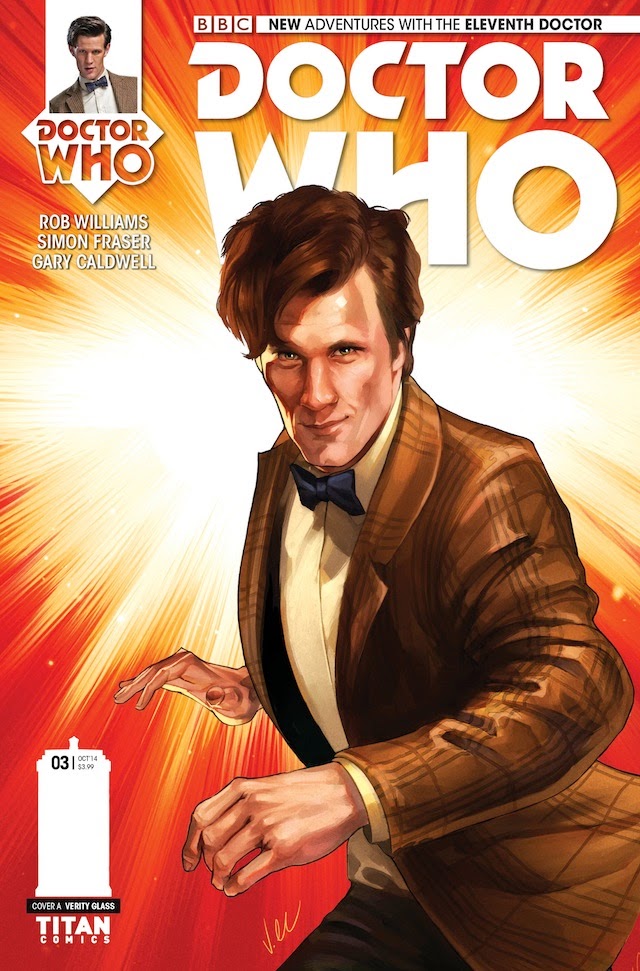 Posted by Brent McKnight at 7:04 PM