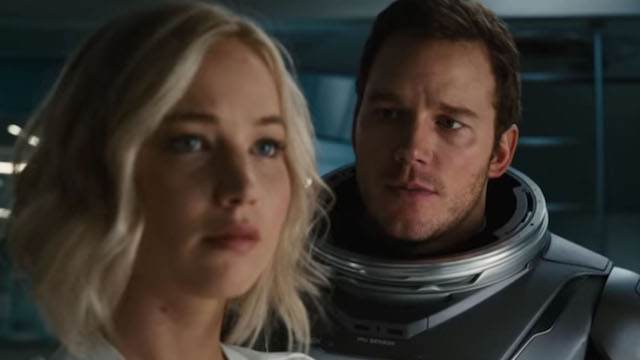 For a movie with a huge budget, two of the biggest stars in the world, a prominent director, and a prime holiday release, we’ve heard relatively little from Passengers. At least up until now, as the dramatic sci-fi romance delivered its first trailer.

Starring Jennifer Lawrence and Chris Pratt, with Morten Tyldum at the helm, Passengers appears sleek and slick and, I don’t know, maybe a little empty. Everything looks fine and charming, and it checks off all the boxes, but there’s just something about this that isn’t hitting home for me at the moment.

Hopefully that’ll change. I’m always game for more high-concept, high-resources science fiction. There’s a kind of Event Horizon meets The Shining vibe that I dig and that I’d like to see more of, and the visuals promise to dazzle the eye.

Written by John Spaihts (Prometheus, Doctor Strange), Passengers is one of those movies that was in the works forever, for so long that I started to doubt it was actually going to come to fruition—the script first landed on the Black List (the annual collection of the best unproduced screenplays floating around the industry) back in 2007. It bounced around between studios for a while, and Keanu Reeves was attached to the male lead for years—at various stages, Reese Witherspoon and Rachel McAdams were in line for the female lead. It also initially had a modest, $35 million budget (the final reported budget is around $120 million), which is roughly the combined salaries of Lawrence and Pratt.

Here’s a synopsis for Passengers:

On a routine journey through space to a new home, two passengers, sleeping in suspended animation, are awakened 90 years too early when their ship malfunctions. As Jim (Chris Pratt) and Aurora (Jennifer Lawrence) face living the rest of their lives on board, with every luxury they could ever ask for, they begin to fall for each other, unable to deny their intense attraction... until they discover the ship is in grave danger. With the lives of 5000 sleeping passengers at stake, only Jim and Aurora can save them all.

We might stray into spoiler-y territory for a moment. You’ve been warned.

The way Passengers was described early on, there’s more to the story than what we see here. Jim and Aurora wake up, and this trailer makes it look like that was coincidence (or fate if you want to go that route), but the early rumors indicated Jim woke up alone, decades before anyone else, and that after a while of hanging out with no one but Michael Sheen’s robotic bartender for company, he wakes up Aurora. On purpose. Which seems like a dick move.

The end of the trailer indicates Jim has something important to Aurora, and if you’re facing certain death, that’s the kind of big secret you just might reveal. If that’s still the case, you have to wonder how she’ll react.

It’s going to be interesting to see how Passengers performs at the box office. Again, it has big stars, lots of money, all the bells and whistles, but it also opens up a week after Rogue One: A Star Wars Story. While I don’t expect that to be quite the juggernaut Star Wars: The Force Awakens was, it’s going to do rather brisk business. And on the same day, the long-awaited adaptation of Assassin’s Creed opens. Though the target audiences aren’t identical, there’s a good bit of crossover between all three of these. It just seems like Passengers could get lost in the shuffle. To be honest, we’d heard so little, I started thinking Sony might delay the release. Then again, what the hell do I know?

Passengers rides off into the depths of space on December 21.
Posted by Brent McKnight at 8:59 AM