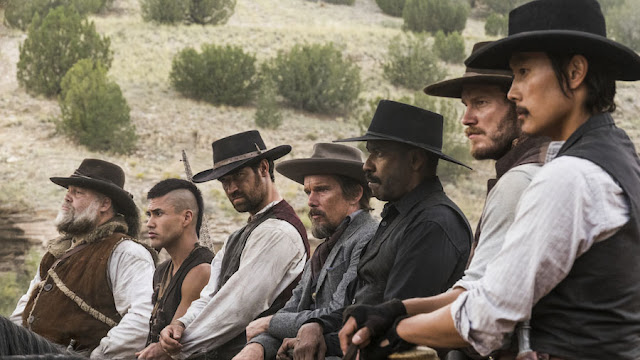 Studio westerns are a Hollywood staple, though one that has largely fallen by the wayside in recent times. Reworkings and narrative modernizations of the formula are more common—just look at this year’s Hell or High Water for an excellent example—but a straight-up old school western is something of a rarity. But that’s precisely what Antoine Fuqua’s star-spangled The Magnificent Seven delivers, though in bloodless, PG-13 fashion. It doesn’t bring anything new to the formula, but it doesn’t try to, and that’s fine.

A remake of John Sturges’ 1960 classic, itself a remake of Akira Kurosawa’s Seven Samurai, The Magnificent Seven follows the path laid out by its predecessors. Fuqua assembles a who’s who of big-name stars to play the titular Seven, a veritable rainbow of outlaws, desperados, and ne’er-do-wells who come together to protect the residents of a small frontier town under the thumb of a vicious mine owner.

While not entirely unfamiliar, likes Sturges’ Seven, Fuqua’s takes the extant material and gives it an update. The Olympus Has Fallen director, along with screenwriters Nic Pizzolatto and Richard Wenk, infuses the material with a sense of fun that gives it just a touch of freshness. Part serious genre fare about hard, morally ambiguous men in search of redemption, the film never shies away from camp and has a damn fine time along the dusty trail. 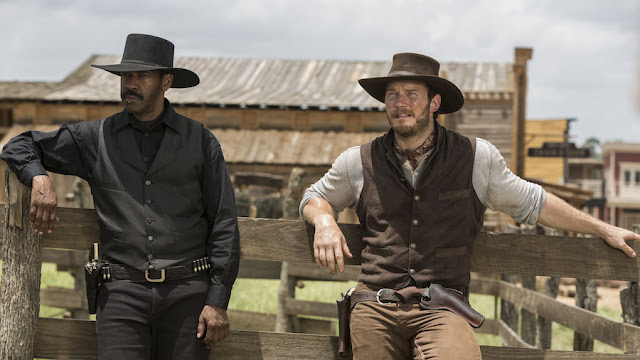 The Magnificent Seven leans heavily on the chemistry between the core cast. Largely forgettable for most of the 132-minute run time, this element makes it worth a watch—there’s nothing particularly deep going on, but the title renegades have an amusing, earnest comradely.

Denzel Washington leads the way bounty hunter Sam Chisolm; a straight role, a man on the run from his past, trying to do right. An archetypal part, Washington could play this in his sleep. Little about Chisolm stands out from the reluctant-hero cowboy pack, but he brings a watchability and charisma to the otherwise flat character, one who rarely says more than a line at a time.

The surrounding players are where things get wacky. Chris Pratt’s rogue gambler Josh Faraday serves as Chisolm’s number two, and the Guardians of the Galaxy star plays him like a kid in a candy store. Though ultimately responsible for the most legitimately emotional beat in The Magnificent Seven, he effuses a wide-eyed glee as he cheats and drinks and shoots and explodes his way through the Wild West. 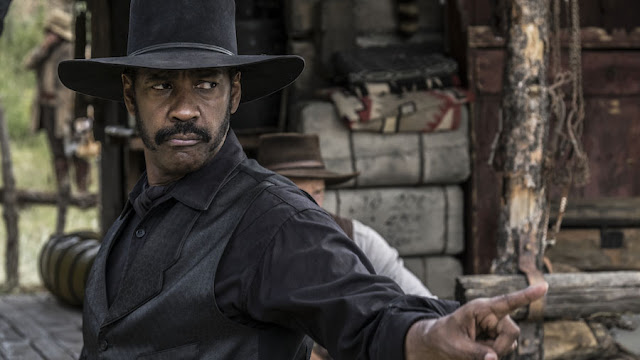 Ethan Hawke’s former Confederate sniper, Goodnight Robicheaux, has his own demons to run from, and the Training Day star lets his expressions do much of the heavy lifting. His partner in crime, Billy Rocks (Byung-hun Lee), a skilled assassin with a penchant for bringing knives to gun fights, and winning, has a surprising, droll sense of humor and a soft spot for squabbling with Goodnight. Mexican outlaw Vasquez (Manuel Garcia-Rulfo) and Native American warrior Red Harvest (Martin Sensmeier) are the weakest links, doing little more than taking up space and rounding out the posse—in a sprawling ensemble like this, it’s easy to get lost, and The Magnificent Seven is not without casualties.

Then there’s Vincent D’Onofrio. Good good, what is there to say about Vincent D’Onofrio’s frontier tracker Jack Horne? It’s tempting to say it’s like he wandered in from another movie, but that doesn’t do his performance justice. He’s on another damn planet entirely, not just another movie. Totally bonkers and unhinged—Faraday calls him a “bear wearing people clothes”—he could easily topple over the edge into absurdity, and though he teeters on that lip, he manages to bring it back, with raucous results.

As joyous and energetic as The Magnificent Seven often is, it’s drastically overlong and the pace and momentum drag for large swaths. Character motivations tend to be way undercooked—it’s easy to pause and question why these men choose, however begrudgingly, this doomed path—and the stock western townsfolk are nothing more than props-slash-cannon-fodder. 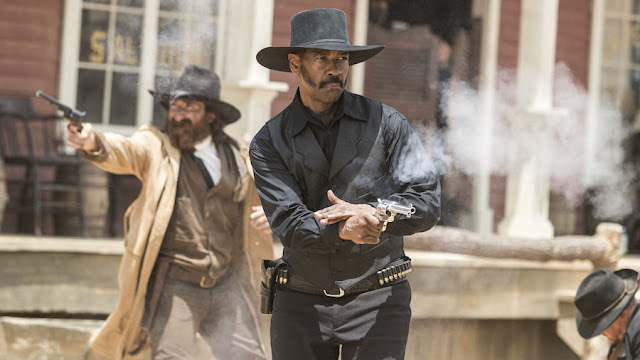 But Peter Sarsgaard’s wicked industrialist Bartholomew Bogue provides a scenery-chewing villain who may, like the antagonist in Fuqua’s The Equalizer, actually be the devil. Not as overt as the last time out, hints mark the way.

A reflection of the current political climates, themes of ravager capitalism, class conflict, and a lingering robber-baron mentality—also frequent features in Fuqua films—figure prominently into the plot. Bogue is pure Adam Smith capitalism distilled down to its most basic form (not to mention an obvious stand-in for a certain current Republican Presidential candidate). He’s willing to slaughter an entire town if it means increasing profit margins and achieving his goals.

Fuqua stages the climactic shootout with a steady hand, but for all sweeping scenery shots and elaborate set pieces, little about The Magnificent Seven stands out in a visual sense. Then again, that claim can be levied against most of his films. 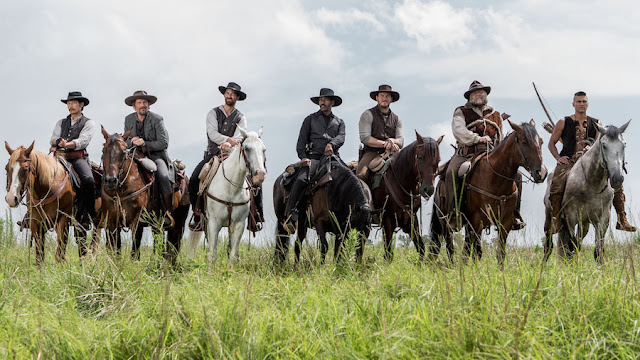 But that serves as a metaphor for the film as a whole. As fun as The Magnificent Seven can be, and as well as plays with an audience, it’s ultimately empty and forgettable; light and breezy, with a remarkable lack of grit for a movie where literally hundreds of people die violent deaths, though without a single drop of blood.

While its predecessors are really about finality, about death and endings, The Magnificent Seven offers a more hopeful bend. Frequent references to building something new on top of the ashes of the old pepper the script, and though that optimism sets it apart from the source, there’s nothing surprising or unexpected to be found, and little reason to consider this beyond surface concerns. [Grade: B-]