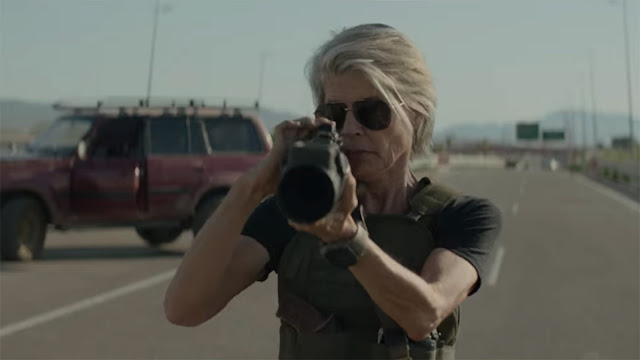 Granted, the last few Terminator movies haven’t been…good. Let’s say it like it is. Depending on your perspective, we maybe even have to go back to Judgment Day to find a good one, but that’s an argument for later. (Though The Sarah Connor Chronicles is fantastic and we got screwed out of more of that series.) But I will never not be excited for a Terminator movie. Sorry, those movies were so formative that’s just how I’m wired. Which is why this Terminator: Dark Fate trailer got me all tingly. Take a look, Linda Hamilton has a bazooka.

See, I told you this Terminator: Dark Fate trailer has Linda Hamilton with a bazooka. Wouldn’t lie about that. I mean, I knew it was coming, I’ve seen the photos and that poster that dropped yesterday, but the moment she steps out of the car, goosebumps.

Though he’s only serving in a producer role, Dark Fate marks the first time James Cameron has been involved with the franchise since T2. What that means remains to be seen, but his participation can’t be a bad thing. He’s said this story is a continuation of the first two movies and will largely, or wholly, ignore the events of the rest, as if this is an alternate timeline, or something like that. Probably for the best.

Deadpool director Tim Miller takes over the director’s chair and David S. Goyer wrote the script, which could be a good thing or a bad thing. It’s a bit of a coin flip.

Dark Fate introduces a couple of new evolutions in Terminator technology. First, we get Mackenzie Davis’ Grace. She’s a high-tech model of some sort and appears to think she’s human. I could see this delving into AI, what it really means to be human philosophical territory. She’s been sent back to protect a young woman named Dani Ramos, played by Natalia Reyes. Skynet, or whoever’s in charge in the future now, has targged Dani for termination, though why remains to be seen. Dani also has a brother named Miguel (Diego Boneta).

The second terminator, played by Gabriel Luna, looks like the next phase of the T-1000 model. It’s liquid metal and can shapeshift, but it can split into separate pieces, which will cause problems. He also looks like a kind of creepy nerd Terminator.

And, of course, we see Arnold Schwarzenegger. Wouldn’t be a Terminator movie without our old pal. Looks like he’s been living in a cabin being a grizzled survivalist for a while. Which he was to a degree in Genysis.

Like I said, I’m never not going to be psyched for a Terminator movie, so I’m jacked up for this. We’ll see if my enthusiasm is unfounded when Terminator: Dark Fate opens on November 1.

Are you excited or is it just me?
Posted by Brent McKnight at 7:56 AM