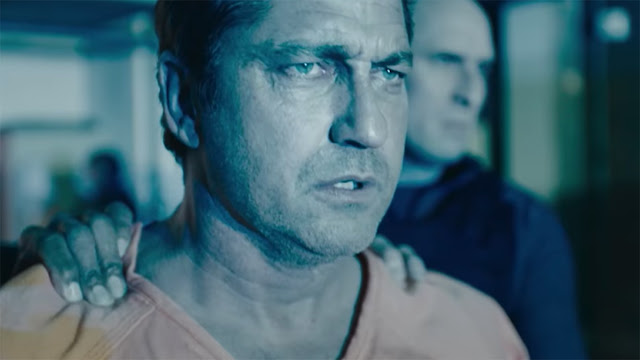 So, London Has Fallen is mean and dumb and as chest-thumpingly numb-skulled and jingoistic a movie as has been produced in years. And I love it. (Though oddly, not a fan of the first film in the series, Olympus Has Fallen.) I’m not sure what to expect from the follow-up, Angel Has Fallen, but you’re damn right I’m excited. I might be the only one. (Not true, actually, I know at least one other person more pumped up than I am.) The first trailer has arrived and I’m here for it all day.


No joke, I cheered like an a-hole when Nick Nolte shows up in this Angel Has Fallen trailer. That’s the sweet stuff right there. Who better to play Gerard Butler’s grizzled, survivalist father than Hollywood’s most legitimately grizzled man? I’m sure that’s something of a spoiler, but does anyone think Angel Has Fallen really cares about spoilers? Nah, that shit’s for commies and snowflakes, or whatever.

Angel Has Fallen picks up with Butler’s Secret Service Agent Mike Banning, still doing his thing, protecting presidents. Only this time, he’s framed for an assassination attempt, goes on the run, and must fight to clear his name. What will happen?

When there is an assassination attempt on U.S. President Allan Trumbull (Morgan Freeman), his trusted confidant, Secret Service Agent Mike Banning (Gerard Butler), is wrongfully accused and taken into custody. After escaping from capture, he becomes a man on the run and must evade his own agency and outsmart the FBI in order to find the real threat to the President. Desperate to uncover the truth, Banning turns to unlikely allies to help clear his name, keep his family from harm and save the country from imminent danger.

Morgan Freeman returns to the franchise that has already given him multiple paychecks to cash. Snitch director Ric Roman Waugh takes over the big chair and we’ll see how that goes. The rest of the cast includes Piper Perabo, Jada Pinkett Smith, Lance Reddick, Tim Blake Nelson, and Danny Huston.

Angel Has Fallen tumbles into theaters to amuse me and only me on August 23.
Posted by Brent McKnight at 10:17 AM