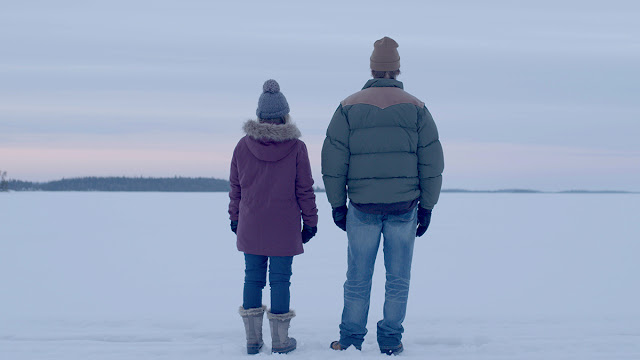 Dee (Rachel Harris) is a harried wife and mother working a at a hotel in a small Minnesota town on the Canadian border. Stuck in a dying marriage, she dreams of doing standup. When Tim (Rob Huebel), a burned-out, low-level, road-warrior comedian—Dee tells a coworker, “We don’t get the kind of people you’ve heard of”—makes a stop in her town, the two form an unlikely bond.

Amber McGinnis’ International Falls—the name of the down, despite a complete lack of falls, though they do have a paper mill—falls into a category with films like Force Majeure. On the surface, it appears simple, but an event or incident exposes the cracks in a marriage until they can’t be ignored. It forces the characters to take close, hard looks at uncomfortable truths they can’t then un-see or ignore. 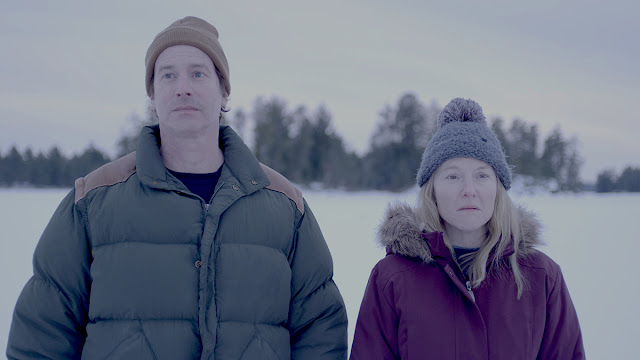 A comedy on the surface, International Falls gets bleak—real bleak, just stone bummer, kick-in-the-sack bleak. Thomas Ward’s script contains the kind of comedy that illuminates the fine, often razor-thin line between humor and sadness, laughter and tragedy. There’s plenty to laugh at, but the chuckles come with a weight and uneasy awkwardness.

A cast of well-known comic actors fill out quirky side characters—Matthew Glave as Dee’s adulterous, disinterested husband; Kevin Nealon as a goofy sheriff; Mindy Sterling as a chatty liquor store owner. But Dee and Tim take up the bulk of the screen time. Both are self-deprecating and deeply, catastrophically dissatisfied with their lives, joking to hide the pain. They’re both adept at “nurturing misery,” and things escalate as they push each other. 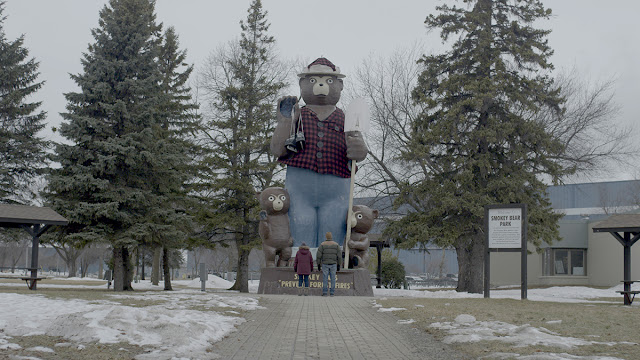 Harris and Huebel are both primarily known as comedians, a fact on full display here—the core of the film is two funny people with fantastic chemistry being funny together. They usually have a wry, biting, sarcastic humor and show up in smaller roles—Huebel is so good at playing the smarmy asshole, while Harris often uses sharp, dry wit. Both use those tools here, but there’s also much more going on.

Tim’s weary and worn-down from years on the road, his humor a defense mechanism to push the world away. Dee quietly watches her marriage erode—it doesn’t crumble in spectacular fashion, it merely fades away until it barely exists. So much falls on the shoulders of the leads and they’re both wonderful. Simultaneously hilarious and melancholy, they use each other but also help each other in ways neither anticipates. I’ve always enjoyed Harris and Huebel, but both show things I had no idea they were capable of and deliver career-best performances that absolutely sing. (I can’t help but think of Kristen Wiig and Bill Hader in The Skeleton Twins, it has a similar effect of seeing two comedic actors show off their dramatic chops for the first time and being wowed.) 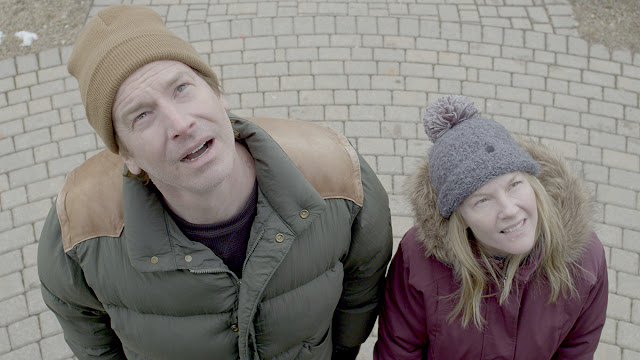 International Falls may be too unrelenting for some. It all rings very true and real, but perhaps that’s the issue, it cuts close and deep and looks uncomfortable realities dead in the face. Sure, it does so with a joke and a laugh, but that honestly makes it all the more impactful and the laughter could easily be tears.

The end isn’t entirely satisfying, and is spools out a bit long, but Harris and Huebel are so good you don’t care. As they strive for authenticity versus artifice, to reclaim their identities, Dee finds an agency she’s never had. International Fall delivers a charming, biting look at emotional desolation, forgotten ambitions, and neglected dreams of two people as they quietly drown. It’s lovely and insightful, dismal and austere, and tiptoes the line between comedy and tragedy.

Whoa. Certainly never expected a movie about my little home town, but here we are. Good review! I'll have to check it out. Certainly seems like a good, heavy dramedy.

Yeah, I don't imagine there are a ton of movies set there!

A very good movie with a very sad ending.