'The Death Of Dick Long' Trailer Wants To Get Weird 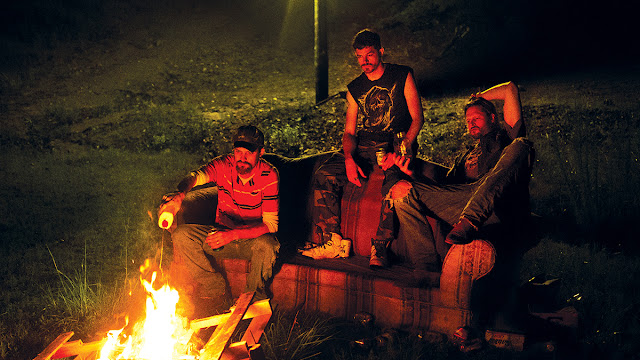 “Y’all motherfuckers wanna get weird?” So begins the trailer for The Death of Dick Long and…that’s really all there is to say. You hear about how you should go into a movie cold, knowing as little as possible, all the time. That’s usually sound advice, but especially in this case. To say what it’s about ruins the whole thing. Fortunately, you can watch this trailer without worry as it gives away nothing that isn’t in the title.

Once you watch The Death of Dick Long, it makes a great deal of sense it comes from Daniel Scheinert, considering he was co-director of Swiss Army Man, the Daniel-Radcliffe-is-a-farting-talking-corpse movie. Again, I can’t give anything away and the less said, the better. Just know if you have a high tolerance for weirdness, it’s fantastic and surprising and never the movie you think it’s going to be.

I was fortunate enough to see this at the Seattle International Film Festival earlier this year. While I didn’t write a full review, I did include a small blurb in my best-of-the-fest article. Here it is:

Easily the best movie about an Alabama-based Nickelback cover band I’ve ever seen. From director Daniel Scheinert, this startling dark comedy is not the movie you expect. To say more is to ruin the fun, but know that it’s hilarious and twisted and unexpected and shocking and legitimately moving and introspective.

Did I forget to mention the Nickelback cover band aspect? Sorry about that.

Here’s the official synopsis, which gives away about as little as the trailer:

Holy Crap. Dick is dead. Died last night after band practice, and his bandmates, Zeke & Earl (Michael Abbott, Jr. & Andre Hyland), don’t want anybody finding out how. That’s too bad though, ‘cause news travels fast in small town Alabama, and these guys suck at covering their tracks. The authorities haven’t ID’d the body just yet, but Zeke’s wife (Virginia Newcomb) and his daughter are suspicious already.

The Death of Dick Long is crazy and sick and funny and more emotional and meditative than a movie about what it’s about has any right being. It’s also really damn good. A24 plans to release the film on September 24. Walking out of the theater, I wondered how they planned to market this, and apparently the strategy is not to reveal anything, which is a good idea.
Posted by Brent McKnight at 1:32 PM