Fantasia 2019: 'Jesus Shows You The Way To The Highway' Movie Review 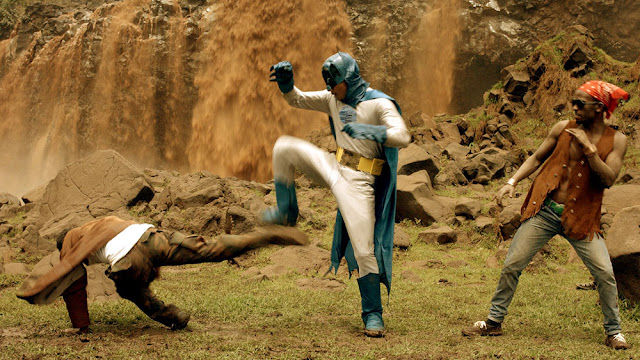 With a title like Jesus Shows You the Way to the Highway, you probably expect to something a bit outside of the mainstream. Also, considering it comes from Miguel Llansó, the writer/director behind 2015’s equally off-kilter Crumbs, strange things are in store. And Jesus doesn’t disappoint, combining science fiction, cold war spy thrillers, superheroes, Afro-futurism, and enough surreal flourishes to make Jodorowsky’s head spin.

All Agent D.T. Gagano (Daniel Tadesse) wants is to open a pizza parlor with the love of his life, Malin (Gerda-Annette Allikas), who, in turn, dreams of opening her own kickboxing gym. There’s one major problem. Gagano’s a CIA agent, and when a computer virus personified as Soviet leaders threatens to take over the world, he must jump into action, enter Psychobook, a virtual reality world, and, along with his partner Agent Palmer Eldritch (Augustin Mateo), save the day. And it’s so, so much more bizarre than even that sounds. This is a wild, wild time. One that prominently features Batman as the cocaine-addled Ethiopian president, a computer virus Stalin, kung fu masters named Spaghetti and Ravioli, rock and roll Jesus in a fly costume taking hallucinatory drugs, and mania of all stripes at every turn. Gagano embarks on numerous side quests and the lines between reality and the digital realm blur and bleed over until it’s unclear where one ends and the other begins.

Rowdy and imaginative, Llansó, a Spanish director, filmed across the globe, landing in Ethiopia, Spain, and Estonia. He augments the weirdness inherent in the plot, characters, and story, with unique visual approaches. 8-bit aesthetics and music that could be lifted from Atari games butt up against stop-motion done with live people instead of clay figures. Men fumigate wearing paper Richard Pryor masks, people become trapped in VR hellscapes, and a propulsive free jazz score cuts through the whole film, underpinning the untethered abandon and madcap momentum. Every element is designed to unnerve and unseat the viewer’s sense of reality. 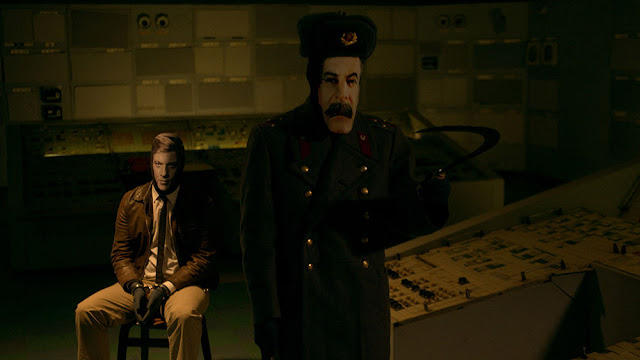 Full of bonkers energy, the film follows an unhinged dream logic and narrative flow, though it’s probably best not to look too close to see how it all holds together. This is best experienced as just that, an experience. Sit back and luxuriate in the surreal, fantastic imagery, stream-of-consciousness plot that borders on haphazard (or does it?), and the strategic lo-fi lunacy that unfolds before your eyes. If you let it, this washes over you and takes you someplace special.

There’s honestly not much to say that paints an accurate portrait of Jesus Shows You the Way to the Highway. It’s a singular vision from one of the most unique filmmakers working today. The film references and calls to mind tons of movies and pop culture touchstones, but it’s like nothing you’ll see anywhere else. I’m not entirely sure of the ultimate point, but hang on, because it’s a hell of a ride. 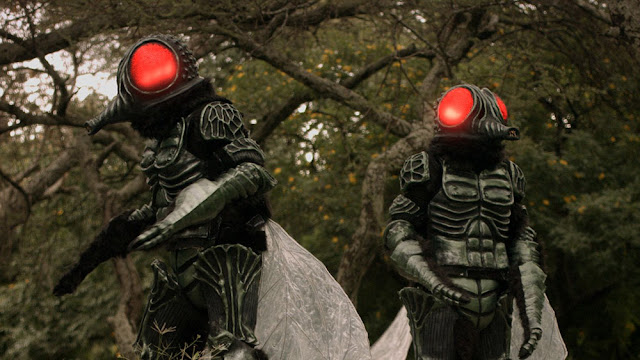 Posted by Brent McKnight at 1:36 PM