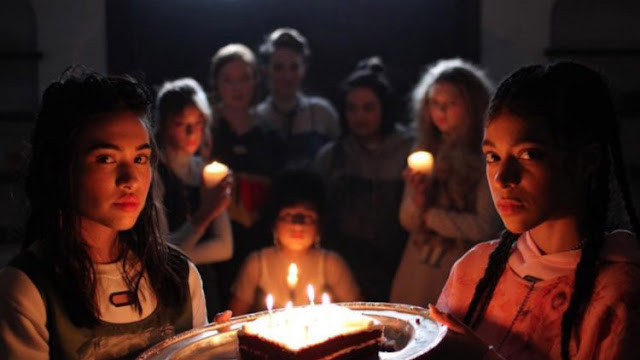 “We’re not boys, we’re not brutal,” intones Dolly (Ryan Simpkins) in a broken, high-pitched cry. It’s more question than statement, and unfortunately for her, she’s about to learn precisely how savage teenage girls can be to one another. Thus goes Amanda Kramer’s thriller Ladyworld.

In a spin on Lord of the Flies, after a major earthquake, eight young women become trapped in home, what was once a birthday party now a prison. As the days pass and supplies run out, tensions and pressures rise, rivalries unfold, sects form, and secrets and regrets bubble to the surface. 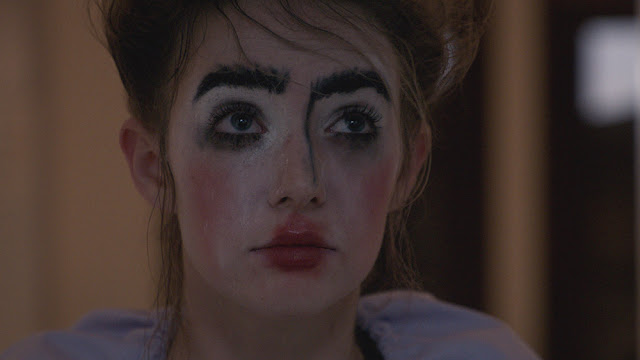 The bare bones plot doesn’t paint the whole picture, however, and things are not so straightforward. Kramer and co-writer Benjamin Shearn inject Ladyworld with a borderline surreal edge, leaving the audience to wonder if any of this is real. It’s possible to read this situation as practical truth, that these girls are stuck in a house, or as a metaphorical purgatory. Either way, the film concerns itself more with the fraying psyches and unravelling social conventions than providing answers.

Every element serves to enhance this unsettling, unnerving atmosphere. Cinematographer Patrick Meade Jones frames shots like an adolescent last supper. Lacking a traditional score, one played with instruments, layered acapella vocal sounds and eerie songs sung by the young cast haunt the film. The girls talk of “The Man,” unseen but in the house with them, a looming threat of dread and harm. Everyone becomes increasingly unhinged as fear and paranoia bloom, building to a deranged climax.

[Related Reading: 'The Gangster, The Cop, The Devil' Movie Review] 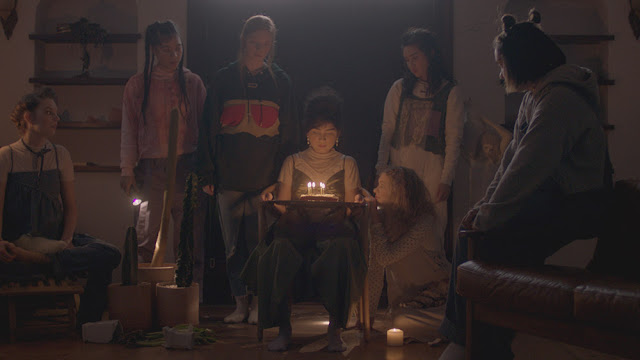 At times the slow-burn turns aimless, and Ladyworld serves more as a showcase for its slew of talented young actors. Though there’s a great deal of talent on display, not everyone has their own personality or time to stand out.

The girls split into two factions. There’s the good girls, led by Olivia (Ariela Barer). Reluctantly taking the role, she just wants everyone to behave and get along and wait for the rescue that may or may not be on the way. Dolly is in her camp. Sweet and simple and sheltered, she dissolves more quickly than the others, more susceptible to the new anxieties and definitely not built for this. 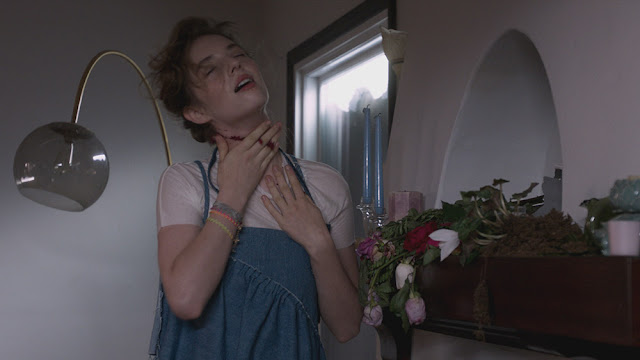 On the other side, Piper (Annalise Basso) leads the way. Already a mean girl with a keen eye for deep emotional evisceration, she becomes positively vicious, relishing in her power and the pain of her adversaries. This sect reverts to a wild state, painting themselves in near-kabuki make up and adopting pseudo-post-apocalyptic costumes, hoarding resources and violently protecting their turf. Along for the ride, she drags Romy (Maya Hawke), who texts and talks on the phone as if anyone was out there, or as if it even still had a charge.

Outside of the main four, however, the rest of the cast is basically the chorus, background players taking up space in the contained, constrained setting. Only given a line here or there, they’re more or less interchangeable as there’s simply not enough space to go around. 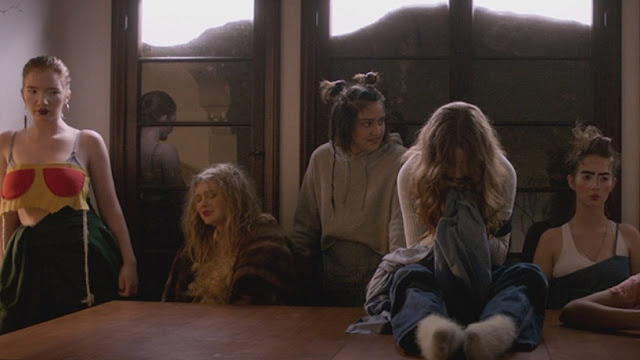 Kramer pushes her characters to the brink and beyond, by turns reminding the audience of heinous acts people are capable of, but also that these are awkward kids. Power struggles and politics butt up against insecurities. And the meat of the film lies in the dynamics and intricacies of adolescent female relationships, here stripped to their barest form.

A familiar story, Kramer uses the framework with a clever strength and style to bolster Ladyworld. Occasionally thin on narrative, the performers carry the film, deftly toeing the line between chaos and civility. Full of tension and intrigue, it uses limited resources to great ends, and though uneven and shabby at times, stands as an impressive effort.

Posted by Brent McKnight at 9:51 AM