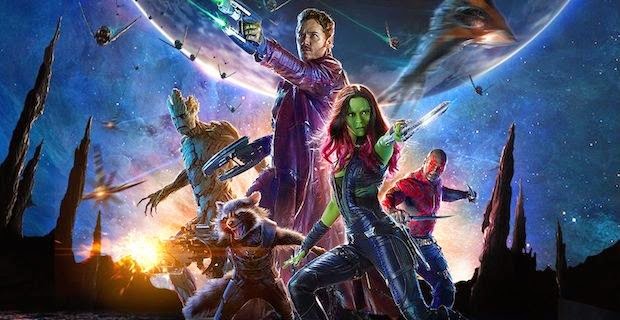 Ticket sales at the box office may have been at a 20-year low in 2014, but that doesn’t mean there wasn’t anything worth seeing. I’m a firm believer that, no matter the state of the industry, there will always be people making exciting, interesting films, you just might have to look for them. Regardless of what this means for studios and their bottom lines, sci-fi fans had a lot to dig into over the past year. There were huge, spectacle style blockbusters right along side quiet, introspective independent features more concerned with ideas than eye candy, as well as everything in between. There are a few gaps in my genre viewing for the year—I still have yet to watch titles like Young Ones, The Zero Theorem, and Under the Skin for some reason—but in this spirit, here are my top ten (actually eleven) sci-fi movies of 2014.

Guardians of the Galaxy

Hands down, I didn’t have more fun at a movie over the past year than I did watching Guardians of the Galaxy. When I first heard Marvel was adapting one of their more obscure titles, I thought it was a gamble, but it’s one that paid off huge. Not only is it the biggest domestic movie of the year (number two globally behind the latest Transformers), but director James Gunn delivered a pitch perfect blend of swashbuckling action in the vein of Star Wars, sarcastic humor, and legitimate emotional connection. It’s even more impressive considering that the main cast includes an unrepentant thief, a vicious assassin, a revenge-driven madman, a talking raccoon who likes guns, and an anthropomorphic alien tree who only says three words. In a cinematic universe that often feel homogenous across titles, casts, and crews, Guardians breathed some much appreciated life into the MCU, and, more than anything Marvel has done to date, stands as it’s own unique thing, and we can’t wait to see more.

It took a long time for Snowpiercer to pull into the station, but it was well worth every second we waited. Director Bong Joon-ho and The Weinstein Company went rounds over significant edits, but the filmmaker stayed strong and we got his intended cut. Set on an train that endlessly circles the frozen wasteland of a new ice age, a rigid caste system develops where the poor dwell at the back while the wealthy live in opulence near the front. Tired of the boot on their throat, the oppressed classes, led by Chris Evans’ Curtis, violently rise up and march forward against the tyrants, personified by Tilda Swinton’s Mason. Evans and Swinton do career best work, and though it admittedly it comes off the rails a bit near the end, Snowpiercer is bleak and damn near desolate, but continually shifts, eschewing easy answers and clear definitions, and maintains just enough of a sliver of hope to keep from being entirely devoid of optimism.

Dawn of the Planet of the Apes

Who knew one of the most affecting, human movies of 2014 would revolve around super-smart motion-captured apes? For the first few moments, as Caesar (Andy Serkis) and his ape cronies swing through the Northern California Redwoods, you’re stunned by how incredible the special effects are. To their credit, in a true testament to their quality, a few minutes later you forget about them entirely. While the human side of Matt Reeves’ Dawn of the Planet of the Apes is woefully underdeveloped, the film more than makes up for it with the dynamic between the apes. Themes of family, friendship, sacrificing for the greater good, making hard choices, and intolerance run through the narrative, and almost every element comes together to form something greater than the sum of its parts. No matter how much they try, two characters, one on each side, can’t stem the tide of the inevitable coming conflict, and Dawn remains a haunting film that sticks with you long after the credits roll.

Edge of Tomorrow will probably go down as the biggest marketing blunder of 2014. The film was an absolute disaster at the box office, so much so that it was rebranded for its home video release. Almost no one saw this movie, which is a shame, because the Tom Cruise-starring actioner is way more than just the Groundhog’s Day-with-aliens flick that was marketed. Cruise is as good as he’s been in years, playing a smarmy military officer with no combat experience who is thrown onto the front lines, forced to relive the same day over and over again. And if you’re not a fan of the Top Gun star, you get to watch him die, repeatedly, which is fun. Inventive and surprisingly funny—there’s far more black gallows humor than you were led to believe—Edge of Tomorrow is a movie about repetition that’s never repetitive. Like Dredd a few years ago, people are going to discover this on home video and kick themselves for not seeing it in the theater.

You can lob criticisms at Gareth Edwards’ Godzilla all day long, and they’re almost all warranted, from the lackluster human component to the title monster only being on screen for something like 15 minutes. But while there are big problems, there’s also a giddiness to watching the legendary skyscraper-tall beast roar, stomp through a major metropolitan city, and clash with other monsters. The only way to describe these scenes is awesome, and even with all of the flaws, and the most wooden lead in any movie of 2014 (Aaron Taylor-Johnson, I’m looking at you), it’s more than enough to satisfy me and delivers precisely what I wanted out of this movie.

A low-budget, idea-driven time travel story, Time Lapse made the festival rounds in 2014, gathering tons of awards along the way, and if there’s any justice in this cold, cold world, many more of you will see this in the year to come. Set primarily in a single apartment, three young friends discover a camera that takes pictures 24-hours into the future and use it to their advantage. A slow-burn conflict develops between the trio, and tension mounts—director Bradley King channels Hitchcock and DePalma. Everything starts out great, but the dark shadows of greed and ambition begin to take over in short order and outweigh any potential benefits. Along with similar indie genre films like Safety Not Guaranteed and Primer, Time Lapse instills an important lesson in all of us: don’t fuck with time.

Despite being a sequel to a movie I didn’t particularly care for, The Purge: Anarchy is a badass throwback to the tough-as-nails, gritty exploitation actioners of the ‘70s and ‘80s. While the first film has an interesting hook, but is little more than a standard home invasion flick, Anarchy opens up the world and shows you how the other half, the poor and disaffected who can’t afford fancy security systems, survive the one night a year where all crime, even murder, is legal. This is something you would have seen in a grindhouse theater in days gone by, and more than anything, it announces Frank Grillo as the baddest man currently working in Hollywood. This is a kind of movie that doesn’t get made much anymore, let alone released into theaters, the kind of movie where the chiseled-jaw anti-hero—he’s on a quest for revenge after all—doesn’t even have a name, and if you’re into that sort of thing, Anarchy is something to celebrate.

There are a lot of people out there who hated Luc Besson’s manic actioner Lucy, but quite a few of us loved this ludicrous artifact. It’s based on a flawed scientific idea, and the script doesn’t give star Scarlett Johansson much, if anything to do, but goddamn is this one bonkers movie. This is the French action auteur’s 2001, his Tree of Life, or at least his attempt to do something profound, even if the result is total insanity. Gleefully delirious, this is a nonstop roller coaster ride of a movie that jerks you this way and that, following the title character as she gains access to more and more of her brain until she’s flinging villains around like Darth Vader using the Force. Strange, funny, and always unpredictable, any time she run into a plot obstacle, Lucy just blows right through it, and the result is a frenetic blast.

Indie horror tale The Battery is not your usual zombie film, and injects some much needed energy into the decaying, shuffling genre. A quiet story follows two friends, former baseball players—a pitcher and a catcher, hence the title—as they trek across the Northeast in the wake of a plague that wipes out most of the human population. The film uses this standard set up to plumb the depths, shows how they react to the loss of everything they know, and how they cope with this ugly new world. One clings to relics of the past and old habits, while the other finds a strange sense of purpose and adapts to their circumstances with horrifying ease. The two clash and crack, and with a gritty 1970s vibe, it takes its time getting to its destination, juxtaposing peaceful, idyllic settings with swarms of the walking dead and human depravity running unchecked.

Out of the big dystopian YA adaptations released in 2014, The Maze Runner was easily my favorite. Divergent just isn’t very good, and while I think The Hunger Games: Mockingjay will be fantastic when you can watch it as a whole entity, Part 1 is simply too much of a fragment to be truly engaging. An adaptation of James Dashner’s novel, The Maze Runner has a cool hook—a boy wakes in the middle of a giant, ever-changing maze with no memory of his past or who he is—a unique setting rendered especially well on a budget, and fast-paced, kids-in-peril action. This isn’t going to blow your mind, and many of the characters are underwritten, especially the sole female role, but it’s fun, adventurous, and harrowing, and if you’re looking for a taut, fast-paced film, you can do much worse than this.

The Rover had me the second I heard it described as a grim, gritty, post-apocalyptic western from director David Michod (Animal Kingdom). I would have watched for that alone, but the Heart of Darkness style journey, the deliberate world building, and measured, gradual character development deliver one of the best additions to this subgenre in years. Guy Pearce plays a stoic man-on-a-mission, searching for the men who stole his car, clinging onto the last good, loyal thing he has in this shitty world. Robert Pattinson, as far from his sparkly Twilight vampire as you can get, plays the dim, wounded puppy of a sidekick he picks up along the way and is a good here as he’s ever been. Sparse and spare, even using bubbly pop songs to deliver deep emotional gut punches, The Rover is brutal, bleak, and devastatingly human all at the same time. The end has been a divisive point for many, but I’m in the camp that thinks it’s a damn near perfect conclusion.

Email ThisBlogThis!Share to TwitterShare to FacebookShare to Pinterest
Labels: dawn of the planet of the apes, Edge of Tomorrow, Godzilla, Guardians of the Galaxy, List, Lists, Lucy, Movie Review, Sci-fi, Snowpiercer, The Maze Runner, the rover, Time Lapse