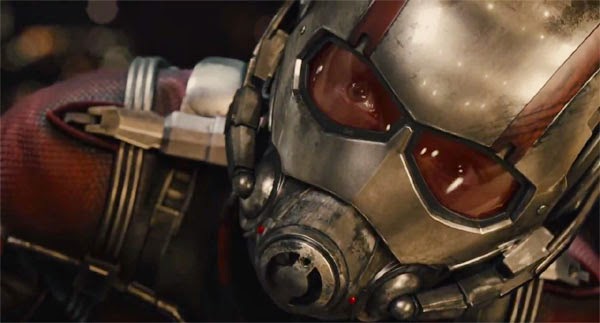 After that “ant-sized” tease, followed shortly by a “human-sized” version of the same video that you could actually see, the trailer for Marvel’s next standalone superhero movie, Ant-Man, is finally here. Check it out for yourself below.

The way it starts out so grim and serious, with Michael Douglas’ monologue about heroics and redemption, only end in Paul Rudd cracking a joke, reminds you of the sarcastic humor from Guardians of the Galaxy, and this looks to fall into that vein somewhat. Given that Rudd is most known for his comedic roles (he also co-wrote the script with Adam McKay), that isn’t a surprise, and if you want to mix high adventure and comedy, we’re totally on board. And Ant-Man rides a flying ant, which is rad, like a superhero Honey, I Shrunk the Kids.

Armed with a super-suit with the astonishing ability to shrink in scale but increase in strength, con-man Scott Lang must embrace his inner hero and help his mentor, Dr. Hank Pym, plan and pull off a heist that will save the world.

Posted by Brent McKnight at 8:20 AM