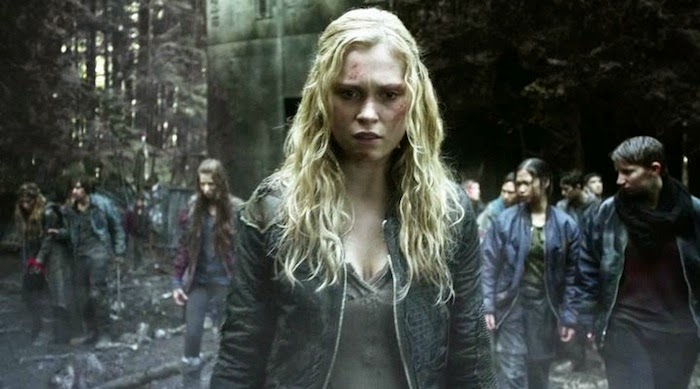 2014 may be in the rearview, but all around it was a damn good year for science fiction. We got fantastic movies big and small, new and interesting additions to the literary side of the genre, and we’ve even got three, soon to be four, Doctor Who comic books. There was also a ton of great stuff to watch from the comfort of our very own couch and tune into week after week on ye olde boob tube. There are some definite gaps in my viewing for the year, but here are some of my favorite sci-fi shows of the past 12 months. In retrospect, this is actually kind of a sad list, as multiple entries have already been cancelled or are definitively on their way out.

A year ago, having seen the promos full of handsome teen boys and pretty teen girls running around the woods, if you told me I’d be sitting here and The CW’s sci-fi Lord of the Flies drama The 100 would be one of my favorite shows on TV, I’d have called you crazy. But here we are, and that’s exactly what I’m saying. In fact, my only real hang up is that everyone in the cast looks like a damn model, aside from that, which isn’t hard to get past after they have an episode or two worth of dirt piled on top of them, the rest of is one of the best sci-fi shows of 2014. I’m as surprised as anyone, that’ll teach me to be closed-minded.

After the world has been wrecked by nuclear war, the remnants of the human race survive orbiting the Earth in a cobbled together space station called the Ark. But it sucks, is cramped, and is falling apart around them. In a desperate, last ditch effort, they send 100 juvenile prisoners down to the surface to see if it’s survivable, like canaries into a mineshaft. There is, of course, some of the usual teen drama at first, but after a few episodes, The 100 quickly established itself with a collection of strong, unique characters and stories that never take the easy way out or go where you expect. It’s been a pleasant revelation, and now halfway through the second season, just when it was in danger of jumping the shark and trailing off, it continues to surprise by moving in new directions. 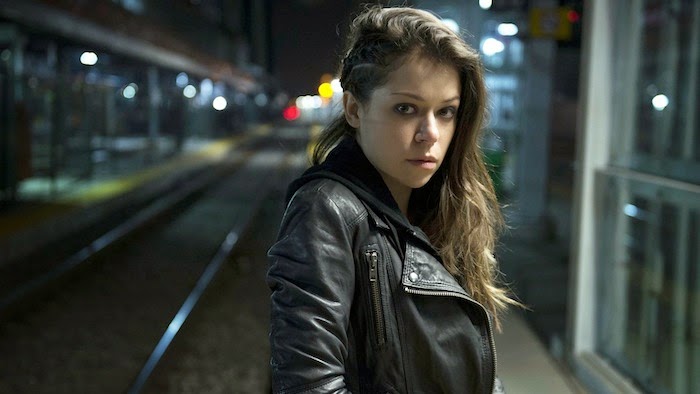 Anchored by a truly mind-boggling performance from Tatiana Maslany, who plays multiple distinct characters, often in the same scene, BBC America’s clone-drama Orphan Black has progressively gotten better, and that’s saying something as it started off very strong. After taking us by storm, season 2 opened up the world, showing that there’s even more to the conspiracy that Sarah, Allison, Cosima, and the others chase after. There’s intrigue, action, drama, and emotion, and even though we have months to wait until season 3 kicks off later this spring, we’re willing to wait and suspect it will be worth the time.

The last season steadily moved Sarah and the others towards the brink of war, though with who remains unclear. Just when you think you have a handle on it, the landscape shifts and your perspective changes. Now not only is there the Dyad to contend with—not to mention Allison’s suburban soccer mom troubles—but they’re not the only clones on the block. A male set clones, all played by Ari Millen, showed up on the scene, but unlike their female counterparts, who live relatively normal lives (as normal as can be given the circumstances anyway), they’re all highly trained soldiers and are going to be a force to be reckoned with. 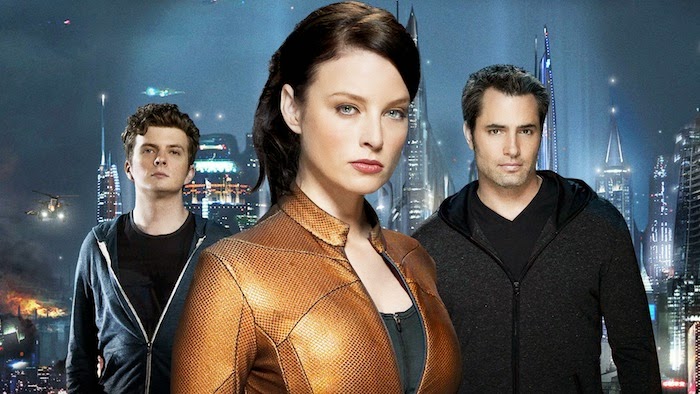 Continuum may be coming to an end—the embattled time travel series was recently renewed for a truncated fourth season, though it will be the last—but over the course of it’s too-short run, it became one of the most interesting, engaging science fiction shows on your television. Rising costs and diminishing returns led to Canadian channel Showcase to pull the plug, but if nothing else, at least we’ll be able to get some closure, and we’ve got a handful of strong seasons to revisit from time to time when we need a fix.

The show follows Kiera Cameron (Rachel Nichols), a cop from the year 2077 who is accidentally booted back in time to present day Vancouver, B.C. along with a group of terrorists. Once she lands, she must use her knowledge of the bad guys, as well as the future, to stop them from wreaking havoc and reshaping the world. That sounds pretty standard, but there’s way more in play. She wants to get home to her family, has cool new tech that helps her out, teams up with a tough-as-nails though still hunky present day cop, and even enlists the younger version of an influential industrialist from the future in her quest. Continuum really hit it’s stride in seasons 2 and 3, finally realizing it’s potential, just in time to be cancelled, of course. 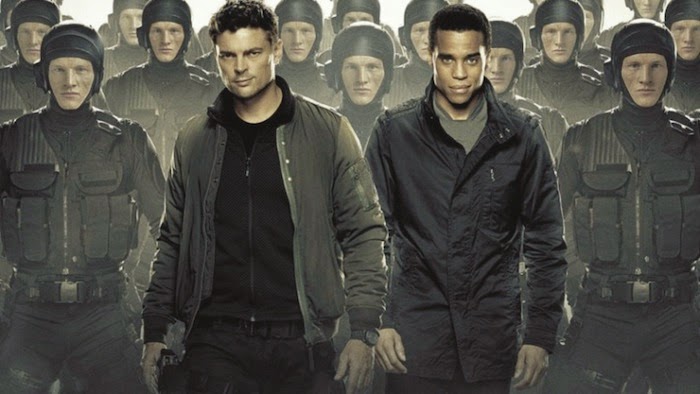 We can add Almost Human, the robot buddy cop drama from J.J. Abrams and Fringe mastermind J.H. Wyman, to the list of sci-fi shows that were cancelled well before their time. It’s one of those situations that are hard as a fan. Do we lament the fact that the show is gone or celebrate that we got to see it at all in the first place, even if it was only for one truncated season? While it sucks that Fox gave it the axe, we’re going to go with the latter option because it was a fun ride while it lasted.

Almost Human takes the police procedural trope of a grizzled, loner cop hiding his secret pain and trauma, paired with a new, mismatched partner, and gives it a sci-fi twist. Not happy with his officially mandated robotic partner, the department scrapes the bottom of the barrel for Detective John Kennex (Karl Urban) latest ride along, Dorian (Michael Ealy), the last remnant of a line of synthetics most remembered for malfunctioning and being wildly emotional and unstable. As you probably guessed, Dorian’s unusual blend of neurosis and personality quirks make him a perfect foil for Kennex, and the uneasy relationship, trust, and even friendship they form, as unlikely as it may be, is the real emotional core of the show. It also works pretty damn well as a hard-boiled sci-fi detective story, with hints of Blade Runner and other influences, as the pair tries to unravel a sprawling conspiracy that goes so far we’ll never see the end. 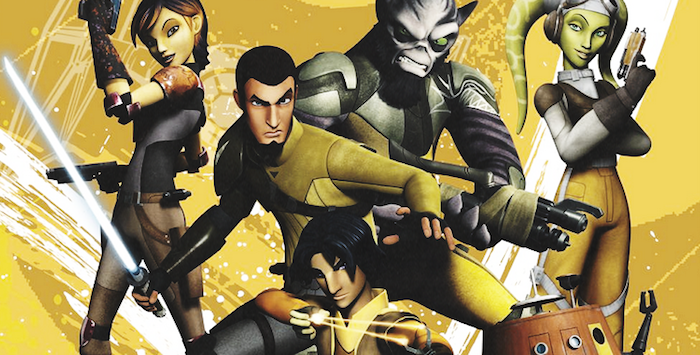 I’m still not a fan of the style of animation, but thus far, that’s the only real knock I have against Disney XD’s Star WarsRebels. The first new addition to the post-Disney buyout of Lucasfilm Star Wars universe, more than anything, watching Rebels feels like watching the franchise you love. There’s that familiar sense of high adventure and swashbuckling action that George Lucas originally lifted from the movie serials he loved as a kid, and it’s as much fun as you hoped, even if it is obviously aimed at a much younger audience.

Set between the events of Revenge of the Sith and A New Hope, Rebels is set in a world where the Empire is tightening its oppressive grip on the galaxy, and on the backwater world of Lothal, a group of resisters, the seeds of what ultimately becomes the Rebel Alliance, stands up. Into their midst stumbles a wayward young Orphan, Ezra, the Luke Skywalker of this particular saga, and the undercover Jedi leader Kanan takes him under his wing, mentoring the boy, developing his abilities with the force.

I have a troubled relationship with AMC’s zombie drama The Walking Dead, but the show is as good as it’s ever been, and getting better, and is finally coming close to the potential inherent in Robert Kirkman’s comics. Not strictly sci-fi, Marvel’s Agents of S.H.I.E.L.D. started to get good after Captain America: TheWinter Soldier, and now, in the middle of season two, it’s become a legitimately important piece of the MCU, and recently introduced some elements from the Inhumans that are likely to play a big part moving forward. Cosmos is definitely more science than fiction, but I will listen to Neil DeGrasse Tyson talk about anything, and if he wants to take me on a guided tour of an abandoned strip mall, I’m there. NBC’s Believe, from J.J. Abrams and Alfonso Cuaron, had all the potential in the world, but while it felt like it was starting to find itself near the end—it was moderately compelling, but always felt almost good—no one tuned in and the network pulled the plug on yet another promising young series.
Posted by Brent McKnight at 8:35 AM