'Inherent Vice' Movie Review: One Hell Of A Trip, Even If You're Not Sure Why 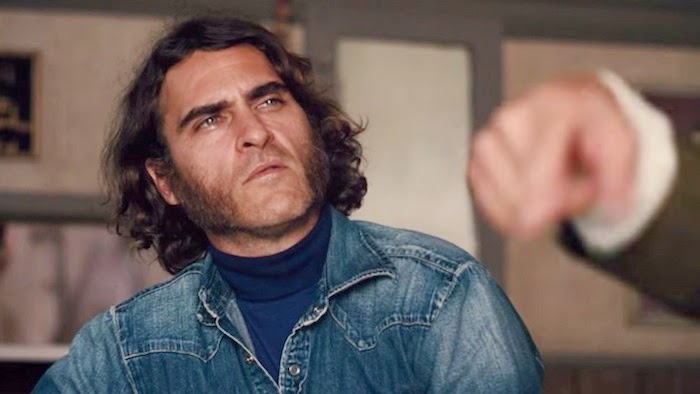 Paul Thomas Anderson is one of America’s great living auteur filmmakers, and at this point in his career, with films like Boogie Nights, There Will Be Blood, and The Master under his belt, he can, and will, do whatever the hell he wants. In the case of his latest, Inherent Vice, that’s a double-edged sword. Sprawling and strange and often entertaining as hell, there are times you wish someone could have reined things in.

An adaptation of Thomas Pynchon’s 2010 novel of the same name, Inherent Vice is a rambling, slow burn, DayGlo noir. You hang out with Larry “Doc” Sportello (Joaquin Phoenix in a far out stoner daze) as he meanders through a tangled web of barely coherent cases that are all tangentially connected, and all related to the disappearance of a real estate mogul named Wolfmann (Eric Roberts)—though as the film progresses it’s increasingly Wolf Man. The inciting incident is the return of Doc’s ex-old lady, Shasta Fey Hepworth (Katherine Waterson), but all of this really just an excuse follow the hippie private dick around as he ambles from scene to scene, some of which may be real, some of which may not.

This can be a bizarre, rollicking good time that, at it’s best, resembles a tie-dyed Magnolia. Adapted by Anderson, the script is full of sharp, funny dialogue and out there, over-the-top situations, like when Doc gets an impromptu show at a pseudo brothel in a trailer in the middle of a land development. The plot unfolds like the protagonist’s attention span, focused over here, distracted by something over there, spying something shiny and gleaming off in the distance, remembering he needs to dig something back at home.

With his ratty hair, wild eyes, and ragged green jacket, Phoenix’s Doc is a fringe Philip Marlowe like only Pynchon and Anderson can create. At the tail end of the peace and love generation, as the clouds of the Manson Family and Richard Nixon loom like specters, he’s stoned and paranoid, radical and disinterested, and far more intuitive and clever than his bewildered, scatterbrained exterior lets on. Things are starting to get toxic in paradise, and starting with Shasta, who has gone square in her time away, Doc’s journey grows darker, and lonelier, with each progressive step. 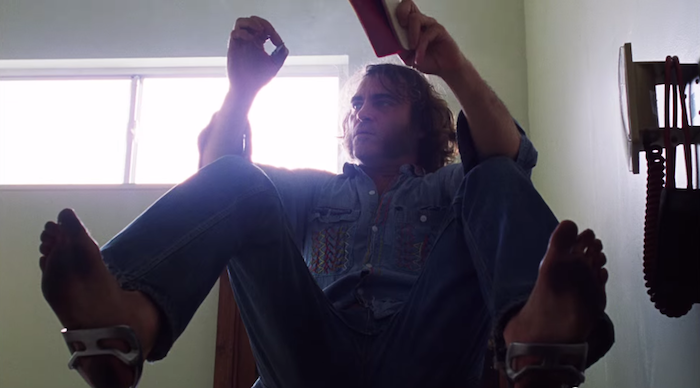 Much like Doc, the story occasionally just gets high and kind of wanders off. And sometimes that’s great, but as you move deeper into the 148-minute runtime, you can’t help but wonder where the hell any of this is going, and why. The destination is very much not the point of Inherent Vice, and a big part of the giddy joy of the film is watching Doc navigate white supremacist biker gangs and members of the Black Guerilla Family, avoid Josh Brolin’s sadistic actor/cop Christian F. “Bigfoot” Bjornsen, and try to figure out if The Golden Fang is a boat, a group of heroin smugglers, or a tax shelter for a group of coked-out dentists. Still, you have to wonder.

Fantastic actors playing colorful wingnut characters pop in for a scene or two—Brolin is the standout, though he is more present than most. Owen Wilson is a dead saxophone player slash undercover police informant, Michael Kenneth Williams gets a moment as a black militant, Jenna Malone is a single mother junkie, and Reese Witherspoon plays an uptight downtown lawyer slumming it with Doc, among countless others. (Hell, a guy I worked with at a pet food store shows up in one drugged-out recreation of the Last Supper at a smoke-filled mansion in the hills.) While this can be a blast, weaving in and out of Doc’s various cases that are really just one big case (in more ways than one), eventually it spirals out so far you get to a point where it can’t come back and floats away.

The whole thing is draped in a woozy cloud of music. An epic period soundtrack includes songs from Neil Young, the Association, Can, and tons more. Radiohead’s Johnny Greenwood, who has scored multiple films for Anderson, adds his own eerie tunes and creaky soundscapes that drag the mood around like guitar pick down a set of strings. It all creates an atmosphere that is as suspicious, pessimistic, and brooding as it is fun in the sun with a doobie on your lips.

Very little is definite or concrete here, and Inherent Vice is a movie best lived as an experience. Sit back and let Anderson take you on a ride hazy ride, accept it like a cloud of smoke blown into your face, and feel what comes. DayGlo and dark, joyous and sad, light and heavy, Doc isn’t so much trying to solve a crime as unravel the mystery of what happened to the era of peace and love, where it went wrong, and why they swallowed the lies they were sold. By turns wondrous and frustrating, engaging and distant, Inherent Vice isn’t a journey everyone is going to want to take, but it is one hell of a trip, even if you’re not always certain why you’re on it. [Grade: B]

Posted by Brent McKnight at 5:47 PM